Why does Batman think he’s a bad person? 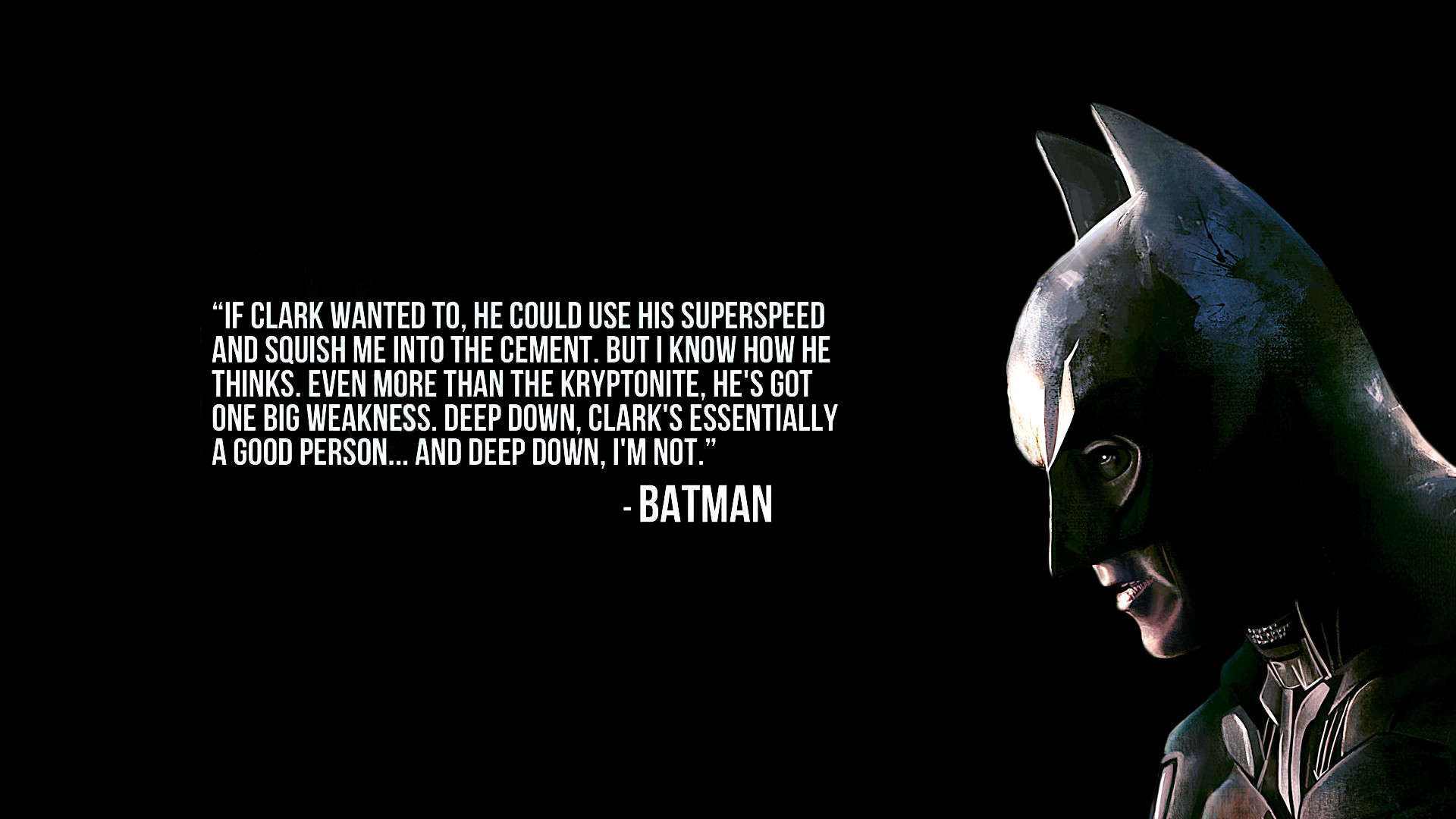 "If Clark wanted to, he could use his superspeed and squish me into the cement. But I know how he thinks. Even more than the Kryptonite, he's got one big weakness. Deep down, Clark's essentially a good person... and deep down, I'm not."
-Batman

Now, I'm not asking about the conflict between Batman and Superman. What I'm asking is, why does he think he is a bad person? Is this mentality explained somewhere in the movie or comic book universes?

The fact is that, in that moment of enlightment, Bruce finally realizes that Superman, is in fact a hero. One that's difficult to understand due to the incredible amount of power he wields, but a truly sentient soul whose ultimate goal is to help mankind.

On the other hand, Batman has PTSD, and often tortures himself on the least excuse he has, probably as a result of the trauma he suffered as a child. He always thinks he's not doing enough, that he's not living up to the high ideal that himself had created.

You can see this tortured line of thought when he says that maybe this is the only good thing he's gonna do, and Alfred asks him if 20 years of fighting crime doesn't count for something.

This quote comes from the HUSH storyline, specifically Chapter 5 The Battle, or Batman Vol 1 #612. 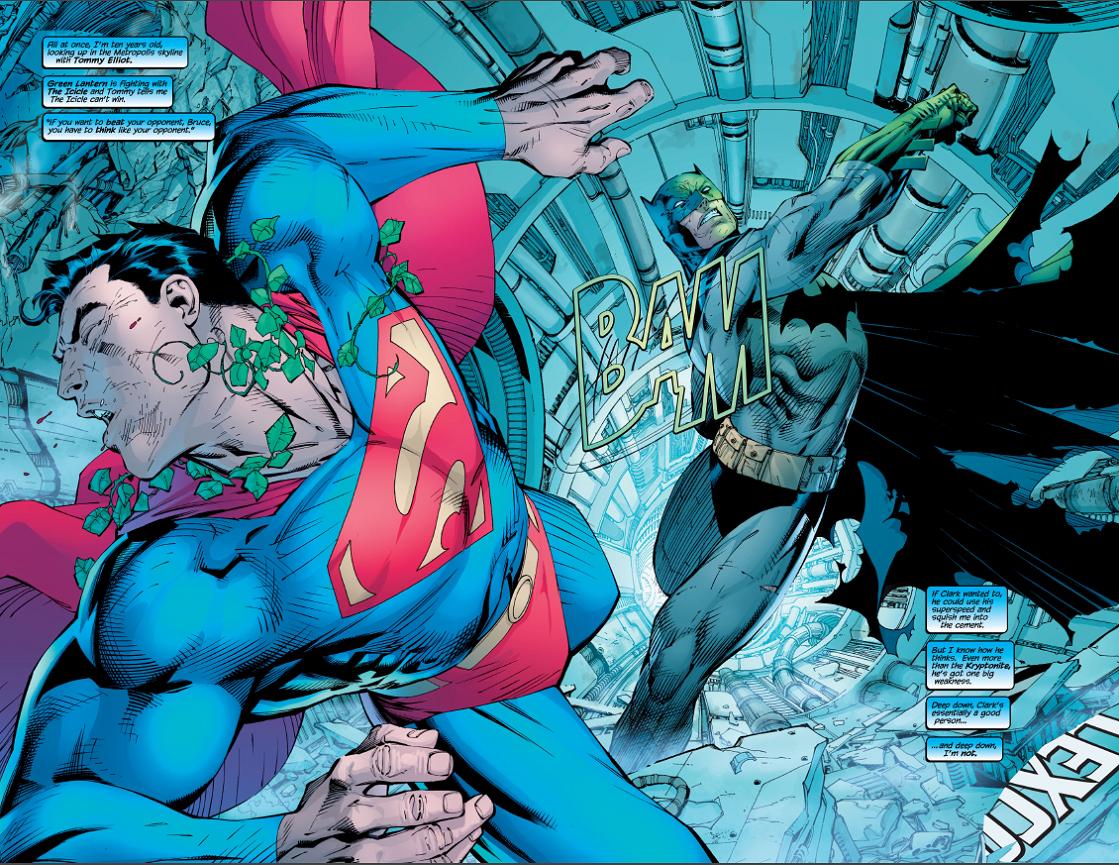 To understand why he says this, it's important to know that he's fighting Superman at the time. In this case, he's fighting a Superman being controlled by Poison Ivy, courtesy of some kryptonite-laced lipstick.

The key phrase, right before the quote in question, is:

Well, Clark doesn't think about unleashing everything he has to take down an enemy. He's trained himself to use as little of his godly power as necessary to end conflicts. His goodness affects him at a fundamental level, which we see as the fight continues. For example, Superman uses his ice breath to freeze hand with the kryptonite ring, and Bruce thinks this to himself:

Arctic breath. He's holding back as much as he can...
...and I have to keep the pressure on.

All through the fight, Batman is doing everything he can to pummel and distract Superman, leading to distracting Superman into destroying the power grid for Metropolis (although backups kick on immediately).

The difference between the two is pronounced. Bruce is a vigilante, operating outside the law, and he'll do whatever it takes to succeed in his mission. Maybe he won't kill, but he'll use sneaky tactics, tricks, and excessive force.

Including having Catwoman capture Lois Lane and have her thrown off of a building, all to get Superman to come to his senses and leave the fight. Although Superman wasn't happy about this. 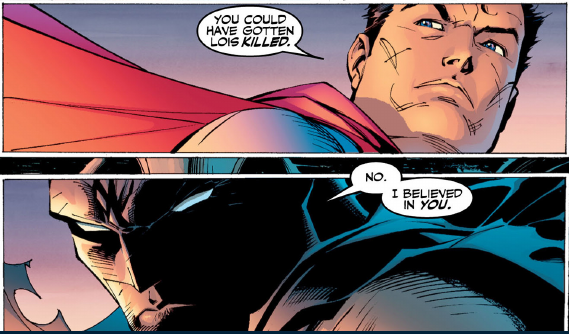 He ends up thanking Batman anyway. 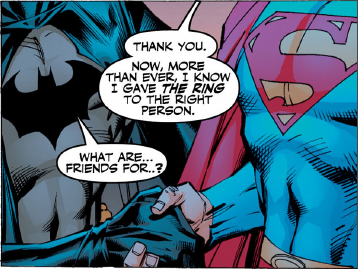 Why? Because, perhaps, deep-down, Bruce is a good person.

What the Hush storyline covers is a lot of Batman questioning himself, who he is, and what he's done. He's convinced himself he's not a good person, because of the way he works and the losses he's suffered (and maybe caused), such as the death of Jason Todd. We're not necessarily supposed to trust Batman's own evaluation of himself, in this case.

In the end, I believe he said those words because he's a man filled with regret, from not being good enough to protect all those he loves, and for isolating himself from everyone who would want to get close to him. Just as he's put up a wall between himself and all those others, he's put up a wall between his true self and how he decides to see himself.

Superman represents hope. He is 'super kind'. I mean he got super powers and his arch-enemy is a human Lex Luthor, granted he is all rich and great mind, but Superman can slap him to dead, but he won't, cause he is 'super nice'.

Now take Batman, he operates on fear, he moves in shadow, and drops in from no where and scares the hell out of his enemies. He intimidates his enemy, so he has to maintain his reputation of being a bad-ass.

To me, the essence of the Batman character is this: His is broken; he knows it; yet, he uses it — it gives him power. It's his motivation. In one Justice League (Unlimited?) episode, it was mentioned that...

"Batman has one superpower: he never gives up" (paraphrased).

I believe this quote is made during the final episode by

One can imagine all sorts of things that a "good" person would simply not do, that Bruce Wayne would do, without flinching. Not things that are evil, necessarily; just things that are unsavory. (In fact, in some situations, doing something unsavory might be the right thing to do.)

It occurs to me this is explained because Batman and Superman follow different ethics systems. Superman follows Deontological ethics because he follows his duty by doing only what is right (or following his morals). He wont't take a candy from a child for doing a greater good. However, Batman practices the Consequentialist ethics. He will do anything, and will follow any means to achieve a result. Fear, intimidation, weapons are valid tools if they will achieve a result he believes will do good. They will often disagree in methods but possibly would achieve similar results in some cases. Now, both are orphans. Justice is orphan. There are differences, though. Superman has been rescued, adopted and loved. He is the ultimate protector to the race (humans) who welcomed him. Batman's actions are against people like the ones who caused him harm (by killing his parents) when he was a child. His soul is hurt and is struggles not to go too far on punishing the bad guys.

In this interpretation, he is saying Superman is beholden to society and what they view as good. Batman is not. If it is necessary to kill to do what is ultimately right, he will. Superman will not, because Superman is more concerned with being "good" (ie how society views him), rather than being right.

Batman is saying that Superman is bound by the rules of 'fair play' - whilst he isn't. Simple as that.

Easy. Considering that Batman's psyche is effed up, he doesn't think like an adult normally would. Many people in and out of universe (including himself) noticed that for his man-child-like behaviour. Thus making his view a rather black and white view.

With that in mind, he beats up people for his own vengeful thoughts, manipulates people and plays dirty. He's feared by those he stands up against and the ones he protects.

And lastly, he wouldn't kill, but will betray any thought of trust if they are becoming an obstacle to his mission. Sounds like a bully, right? And due to Batman's man-child behaviour and black and white view on the world, it's only normal that he would view hinself as this disgusting person he sees.

31
How does Batman disappear?
182
Does Batman use Linux?
23
Is Batman's Kryptonite ring enough to stop Superman if he ever went rogue?
16
Does Batman get sick from common diseases?
19
Why does Green Arrow hate Batman?
7
Why does the Batman "crack his knuckles" in "Batman: Arkham Origins"?
4
Does Batman use makeup or UV sunblock?
30
Does Batman have a spacesuit?