What happens if you can't get in a common room entrance?

What happens if a student can't get physically through the portrait hole or entrance to their common room?

For instance, there's a portrait "hole" in the Gryffindor common room. What if someone was just a bit too husky to fit inside?

I understand the part about Ravenclaw waiting outside if they can't get in because of a riddle, but what about physical limitations? Do the house elves automatically put you on a diet?

Getting through the portrait hole was simple; as he approached it, Ginny and Dean came through it and Harry was able to slip between them. As he did so, he brushed accidentally against Ginny. "Don't push me, please, Dean," she said, sounding annoyed. "You're always doing that, I can get through perfectly well on my own..."

"Well, it was a bad night for romance all round. Ginny and Dean split up too, Harry."

"Oh, something really silly ... she said he was always trying to help her through the portrait hole, like she couldn't climb in herself."

-Harry Potter and the Half Blood Prince

This would suggest that the portrait hole isn't the large size mentioned (and this is direct book canon). Why would she need to climb out if it was so large, and why would he think that she needed help in the first place?

Assuming the original chapter illustrations seen in the first edition US Harry Potter novels (hand-chosen by JKR, but not illustrated by her) are considered to be a canon source of information, then there shouldn't be any problems getting into the common rooms.

The hole behind the portrait of the Fat Lady seems to be surprisingly large (6ft x 6ft?) and should accomodate the biggest of physiques. 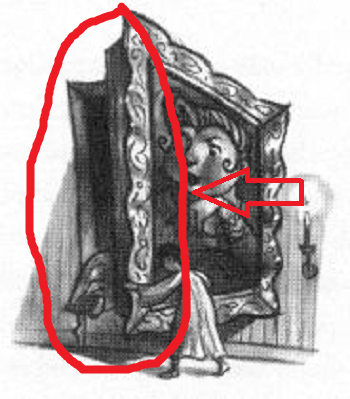 Harry Potter and the Philosopher's Stone: The Midnight Duel

From the Pottermore illustration.

As can be seen, the whole is very large (like Richard said).

Your own quote sabotages your question. :-)

Getting through the portrait hole was simple; as he approached it, Ginny and Dean came through it and Harry was able to slip between them.

If the hole is big enough for one fifth-year and two sixth-years to go through all at once, it is surely big enough for any one person, no matter how large.

If this were to happen to anyone, it would probably be Cormac McLaggen. In Half-Blood Prince in the Hospital Wing after the Quidditch match in which Cormac played, he is described as being the size of a troll:

"You don't want to get hold of him, he's the size of a troll," said Ron reasonably.

At the Gryffindor tryouts he is described as being wide enough to block all three goal posts:

"You didn't try out last year, did you?" asked Harry, taking note of the breadth of McLaggen and thinking that he would probably block all three goal hoops without even moving.

While these two descriptions are probably somewhat exaggerative, we can still assume that Cormac was massive. And in fact there is an explicit example of him having trouble fitting through an entranceway:

As they came into the castle they spotted Cormac McLaggen entering the Great Hall. It took him two attempts to get through the doors; he ricocheted off the frame on the first attempt.

The entrance to the Great Hall is presumably rather large (certainly relative to other rooms in the castle) and therefore it is reasonable that Cormac might have had trouble with other entranceways as well, including, perhaps, the Common Room. It doesn't look like there were any accommodations made for him to get into the Great Hall; he simply had to try again until he could fit himself through. Thus, it is quite possible that he would have to do the same to get into the Common Room.

Also, to address your last paragraph, the reason why people need to “climb” or be helped through is not necessarily because the opening is small. It may simply be (as the pictures show) that the opening starts well above the floor.

52
What does a Ravenclaw do when they can't answer the riddle for their dormitory?

21
Why didn't Dumbledore have access to his portrait on his biography?
24
How did Fawkes get into the Chamber of Secrets?
11
Why didn't Harry get all his books from the Room of Requirement?
8
Did the Fat Lady ever question why sometimes people would leave the Gryffindor common room unseen?
25
Is the trio's Polyjuice escapade in Chamber of Secrets ever discovered?
45
Is Ginny's love for Harry based on hero worship and gratitude for saving her life?
28
Why didn't Aunt Petunia tell Harry how to get into Platform 9 3/4?
14
Was Ginny really used as bait because she was Ron's sister?
11
Did the prefects sit separately?