Why is Tom Bombadil not included in the films?

Is there any reason, that we know of, that Tom Bombadil was left out of the films by Peter Jackson?

Quoting from a 2000-ish interview with Ain't it Cool News1:

"Also, will you be including Tom Bombadil? The Ralph Bakshi production cut it out, as did the BBC radio drama.”

PJ: At this point in time Bombadil is out. The main reason is not just time or pace, but one of simple narrative focus ... the Bombadil sequence has so little to do with Sauron or the Ring, it is difficult to justify the screen time. It simply doesn't give us any vital new information. A very simplest rule of thumb that I use in movie storytelling is to try and further the story with each new scene.

I'm flicking through our Fellowship script ... it is 138 pages long. The Hobbits leave Hobbiton on page 30, and arrive at Rivendell on page 63. Even that 33 pages on the road feels a little long and will probably get trimmed in our next draft.

Basically, Jackson didn't think that Bombadil advanced the story enough to justify spending another 30 minutes to an hour on him, which is a fair assessment. However, some part of the Bombadil chapters did survive, though they were inserted much later in the story and removed from the theatrical edition; a scene clearly based on the encounter with Old Man Willow was filmed and included in the extended edition of The Two Towers, though with Frodo and Sam obviously absent and Treebeard doing the rescuing:

Part of Treebeard's dialogue here is taken directly from Bombadil in the original scene (emphasis mine):

Setting down his lilies carefully on the grass, he ran to the tree. There he saw Merry’s feet still sticking out - the rest had already been drawn further inside. Tom put his mouth to the crack and began singing into it in a low voice. They could not catch the words, but evidently Merry was aroused. His legs began to kick. Tom sprang away, and breaking off a hanging branch smote the side of the willow with it. 'You let them out again, Old Man Willow!' he said. 'What be you a-thinking of? You should not be waking. Eat earth! Dig deep! Drink water! Go to sleep! Bombadil is talking!' He then seized Merry's feet and drew him out of the suddenly widening crack.

The Fellowship of the Ring Book I Chapter 6: "The Old Forest"

Interestingly, Bombadil was included in the film-licensed trading card game: 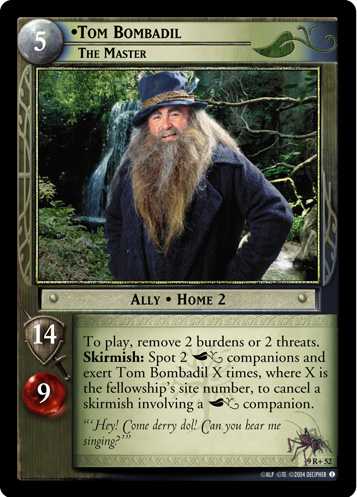 But don't take this to mean that there's some secret Tom Bombadil footage lying around; according to an article posted on the website of Decipher (who produced the game), Bombadil is an original image and character design created by Weta Workshop, specifically for the trading card game:

1 With much gratitude to the Wayback Machine

2 Not played by Sylvester McCoy, alarmingly prescient as that would have been

According to an unsourced interview found on Yahoo! Answers:

Originally Bombadil was going to be in the movie, but had to be cut out. Peter Jackson actually explained this on a televised interview not long after the release of the Fellowship of the Ring. I can't for the life of me find a transcript, but I can summarize.

Interviewer: Were there many scenes from the books that fans were looking forward to in the movie that were cut from the cinematic version?

Jackson: Yes. Unfortunately due to time constraints and budget limitations we had to take out a lot of great material written by Tolkien. Some of these scenes we are actually planning to release in Extended volumes, with the bonus footage we shot but couldn't use in the theatrical releases.

Interviewer: One of the things a lot of fans missed was a character named Tom Bombadil. Is it because of time constraints that you had to remove him?

Jackson: Actually, in our original drafts of the script we had included Tom. Our major concern though, that wouldn't seem to go away, was how to bring him in. In the book he saves the hobbits from a tree that tries to eat them...

Jackson: Yeah, he got them out of a couple of situations actually... But at the time we knew we couldn't include this scene. It would completely take away from the momentum we'd been building during the whole first block of the movie. We just couldn't find a quick and convenient way to bring him into the story, so at the last moment the studio asked us to scrap the idea.

Jackson: Yeah. But, who knows. Maybe we'll put him in a special edition some day.

While his section can easily be excised without disrupting the main story, I have to assume that any director thinking of taking on LOTR would be running scared at how to do him in a way that didn't end up being comical. A character that breaks into song and silliness like Tom does would really dent the seriousness of the ring quest. If you drop the singing then it could work, but fans of the book would be on your back about it.

0
How come Tom Bombadil didn't appear in the Lord Of The Rings trilogy?
34
Did leaving out Tom Bombadil create any plot holes in The Fellowship of the Ring or any subsequent LOTR films?