How are Mars and Saturn forming a right angle?

An extract from Harry Potter and the Order of the Phoenix, chapter 27:

'Professor Trelawney did astrology with us!' said Parvati excitedly, raising her hand in front of her so that it stuck up in the air as she lay on her back. 'Mars causes accidents and burns and things like that, and when it makes an angle to Saturn, like now - ' she drew a right-angle in the air above her '- that means people need to be extra careful when handling hot things - '

To have a right angle (or any angle) one would need three planets. Except that JKR is bad at math, is there any other explanation for the words of Parvati?

Short answer: they're making a right angle with the Earth, so they appear 90 degrees apart on the apparent sphere of the night sky if we use the center of the sphere (our subjective position viewing the sky) as the third point. Or to put it another way, if you stretched one arm to point at Mars and the other to point at Saturn, your two arms would form a 90 degree angle with your body as the center point.

Long answer: because the planets all orbit in roughly the same plane, and the Sun is also in that plane, from our perspective their movements are restricted to a thin circular band in the "sphere" of the night sky (the celestial sphere), a band that crosses through the 12 constellations that make up the Zodiac. Here's an image from the wiki Zodiac article illustrating why we see the Sun move in a circle relative to the celestial sphere (the small red circle is our orbit around the Sun, the yellow line is our line-of-sight viewing the Sun relative to the stars, and big red circle the is apparent path of the Sun relative to the stars over one year): 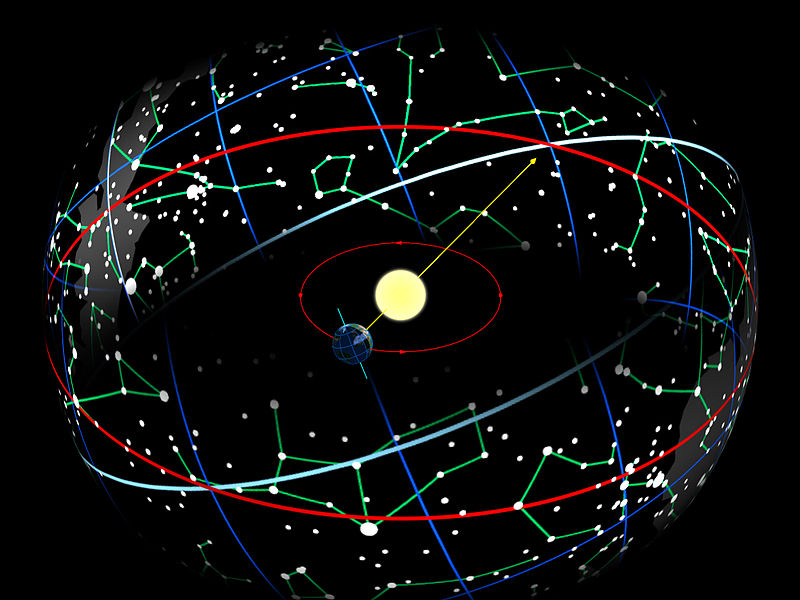 And an image from this page shows how the plane of the Earth's orbit intersects the celestial sphere in a circle that crosses the constellations we have deemed to be "the Zodiac" (and this is also close to the plane of the other planets' orbits, so the line-of-sight between us and another planet should intersect the celestial sphere close to this circle, and the line-of-sight between us and the Sun intersects exactly on the circle, which is known in astronomy as the ecliptic): 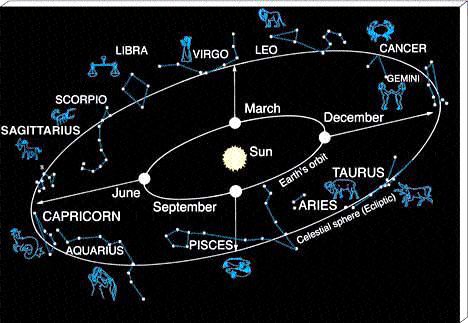 So for this reason, in astrology the positions of the planets on a certain date are depicted by the placement of their planetary symbols on circle on a natal chart, with the circle being divided into 12 "houses" that originally corresponded to the position of the 12 constellations of the Zodiac (though they don't any more due to a long-term change in the direction of the Earth's access called precession): 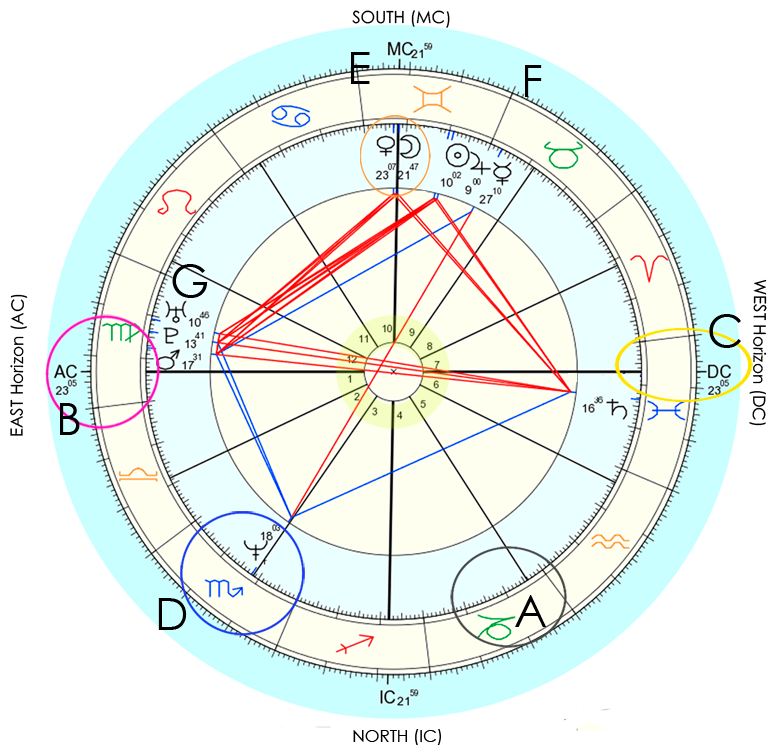 The image comes from this page which explains roughly how it's supposed to work, for example the red and blue lines connecting different planets are called "aspects". And according to wikipedia's astrological aspect page:

In astrology, an aspect is an angle the planets make to each other in the horoscope, and also to the ascendant, midheaven, descendant, lower midheaven, and other points of astrological interest. Aspects are measured by the angular distance in degrees and minutes of ecliptic longitude between two points, as viewed from Earth.

So, presumably a 90 degree angle would mean they are 90 degrees apart on the circle, with the center of the circle (corresponding to our position on Earth looking up at the circle in the night sky) as the middle point that the angle is measured relative to.

I'm not sure whether this is what JKR is going for, but....

Picture the planets as points projected onto some hypothetical sphere at a given radius. One would speak of the angle between those two planets (or indeed any celestial objects), as the difference between one of the angular coordinates of the two points on the sphere in a coordinate system where the other angular coordinate is held constant. That is to say, the angle between two planets uses the Earth as the third point. That's why we can speak of the angular size of objects in the night sky: it only makes sense from a given vantage point.

I would note that this sort of terminology appears in actual astrological texts:

Let's do a similar analysis for the Part of Sickness. The two malefics are Mars and Saturn. Mars rejoices in the 6th house of illness, and Saturn delights in the 12th house of confinement. The angle between Mars and Saturn must symbolize something about the querent's sickness and confinement. By subtracting the longitude of Saturn from the longitude of Mars, you get the angle between them.

13
How are Time Turners made?
2
How Confidential/Safe are Howlers?
9
How dangerous are Thestrals?
39
How old is Voldemort, and how old are his ideals?
3
What abilities exist in the Potterverse and how common are they?