Why did Negan think this punishment was enough and would be so soul-destroying?

In the last episode of season 6,

Negan kills one of the Alexandria citizens. He says this is repercussion for killing his men (the group at the base with a satellite, the group Carol killed, and the group that Daryl RPGed - although he may not have known about this one).

Considering all of the characters that have died that were held amongst the current characters as beloved (Herschel, Lori Dale, Carol's daughter, Beth, Andrea, etc), what is Negan's justification for killing only one member of a group he must surely have realised have gone through far worse hardships than one death? He said he wanted them to work for him, which would explain why he didn't kill them all. But why would one death seriously faze Rick's team, given their past experiences? It seems that Negan's best move would've been to kill a handful of them, even if that would reduce the manpower at Alexandria.

TL;DR: The point wasn't to crush people's souls or even the score, it was to make Rick look powerless in front of his own people. The deaths the group has already endured are irrelevant, because they weren't like this - Negan kills someone in front of Rick and says "This is your fault for going to war with us. If you hadn't attacked us, I wouldn't be killing this person right now. You got this person killed".

It's not the one death alone that he's depending on - it is the utter hopelessness Rick's group felt when they realized that there are hundreds of Saviors and they're totally ruthless. According to my count1, Rick's people had killed 43 Saviors prior to the season finale. Before the finale, Rick probably thought the Saviors were all but wiped out. When he saw them all around him in that clearing at the end of the finale, he realized he had barely made a dent in their numbers, and they were going to teach him a lesson and bring him to heel.

And think about what this means for Rick - when he was at the Hilltop, he stepped into a war against an enemy he knew nothing about. He personally rallied the troops to attack Negan. A lot of people in Alexandria will blame HIM for this. Rick looks weak, he looks like he cost someone their life in an unbelievably brutal way, and he looks like he just cost Alexandria half of its resources. That's what Negan wanted.

The message isn't "Two of your lives (Denise and the unknown victim in the finale) balances out 43 of our lives" (actually, it is now 44 lives - Morgan killed another Savior). The message is "We can (and will) do whatever we want to you, and you can't fight back or we'll murder all of you".

Negan pretty much explains his MO in his speech. Negan's speech on the show was taken almost verbatim from the comics, aside from his non-stop torrent of naughty words, which were omitted from the show. I've left the naughty words in these screen caps (except for one very explicit sexual reference), but I've redacted dialogue - and omitted a number of entire panels - that would give away the identity of his victim. So if you've seen the episode where Negan is introduced, you don't have to worry about spoilers here, but if you're offended by foul language, you might want to skip this part of the post.

I've circled the dialogue bubbles containing the most important points Negan makes in red. They're not freehand circles, but this looks better. 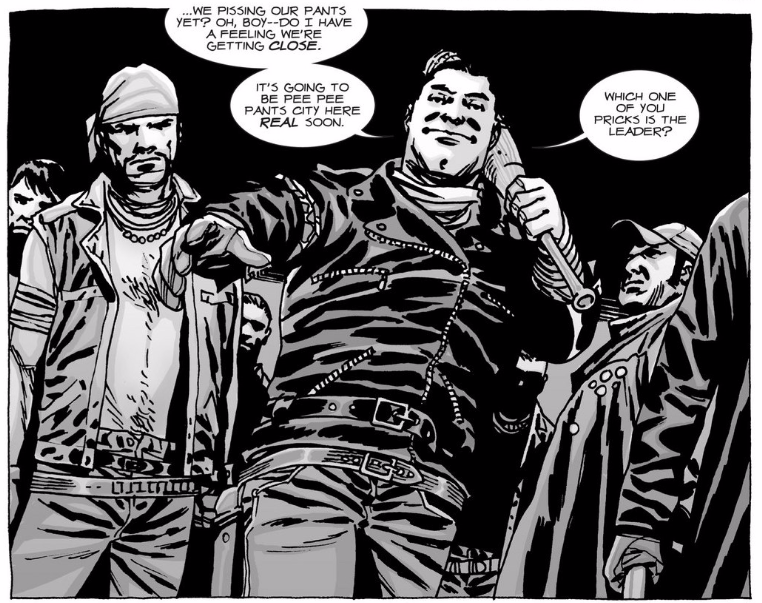 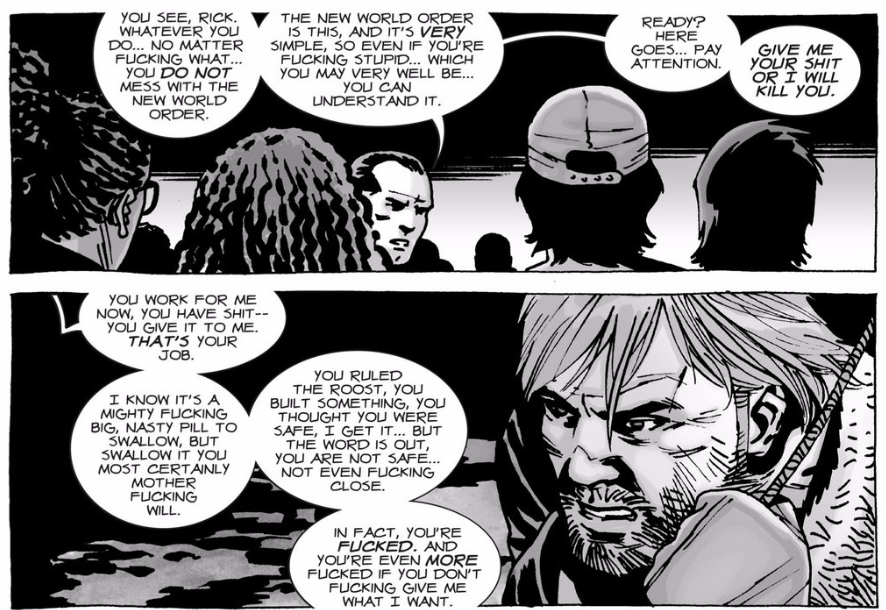 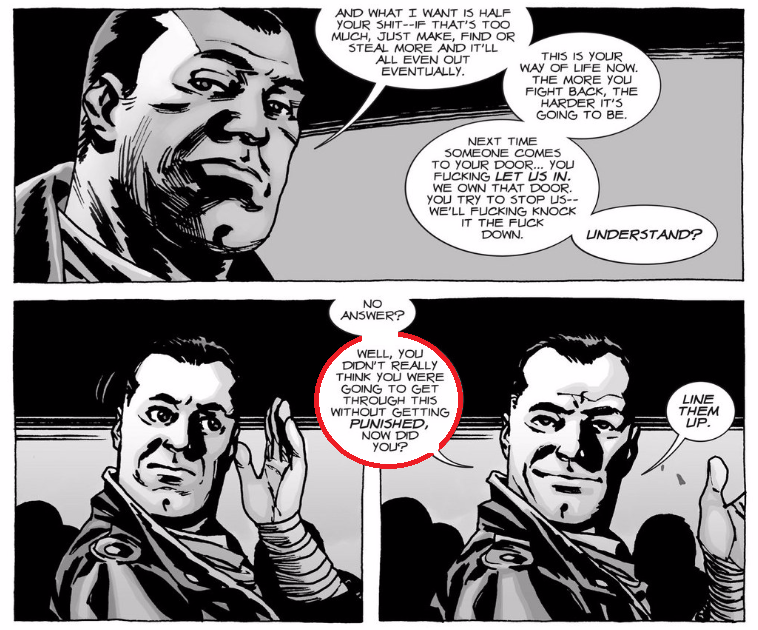 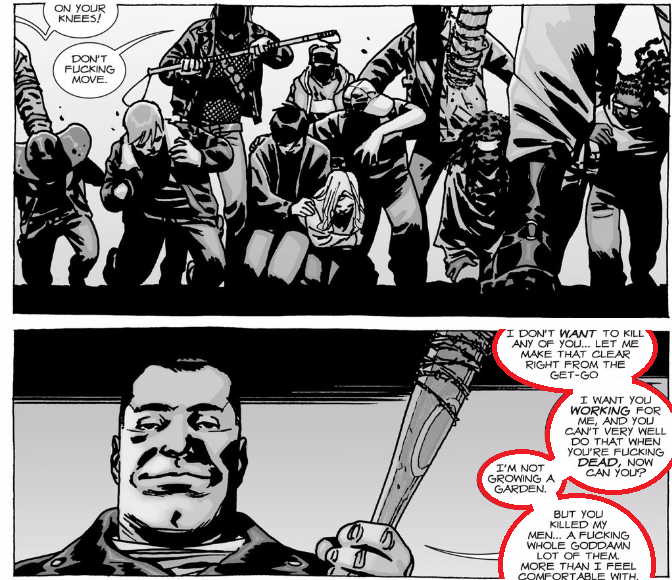 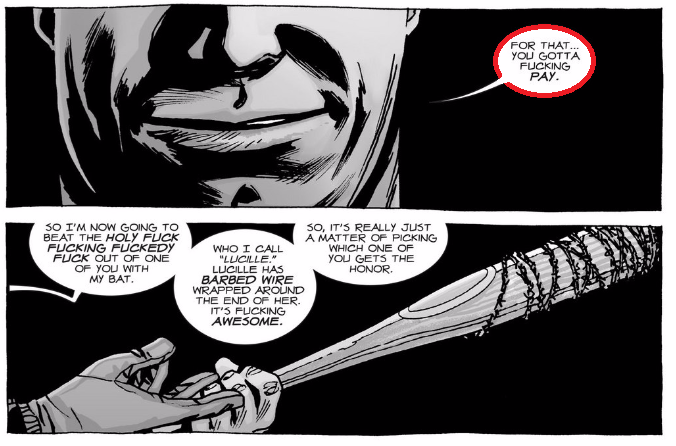 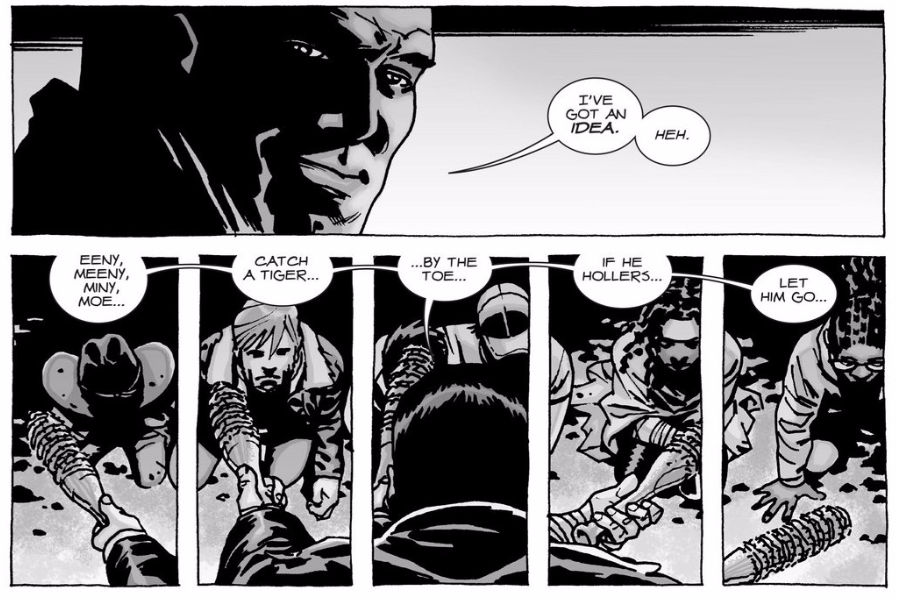 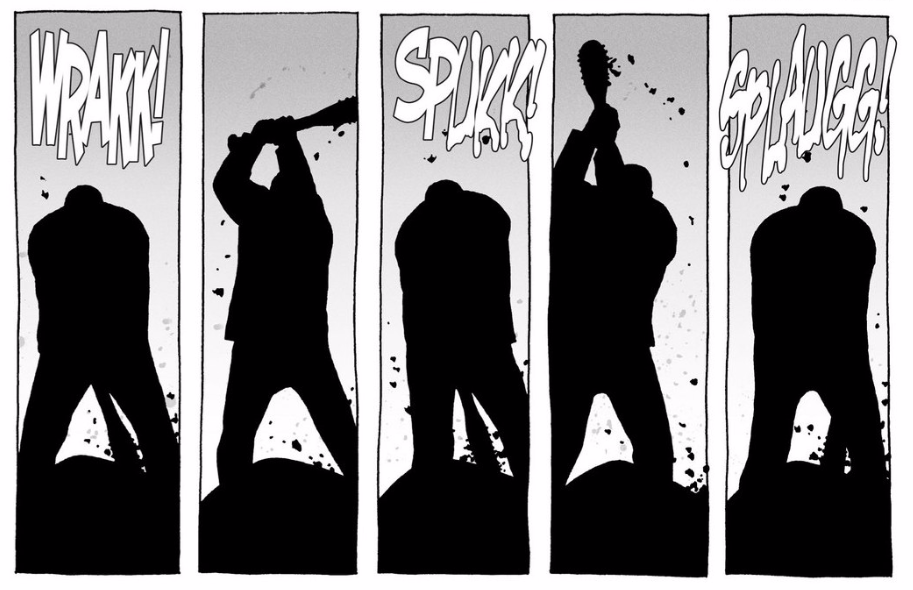 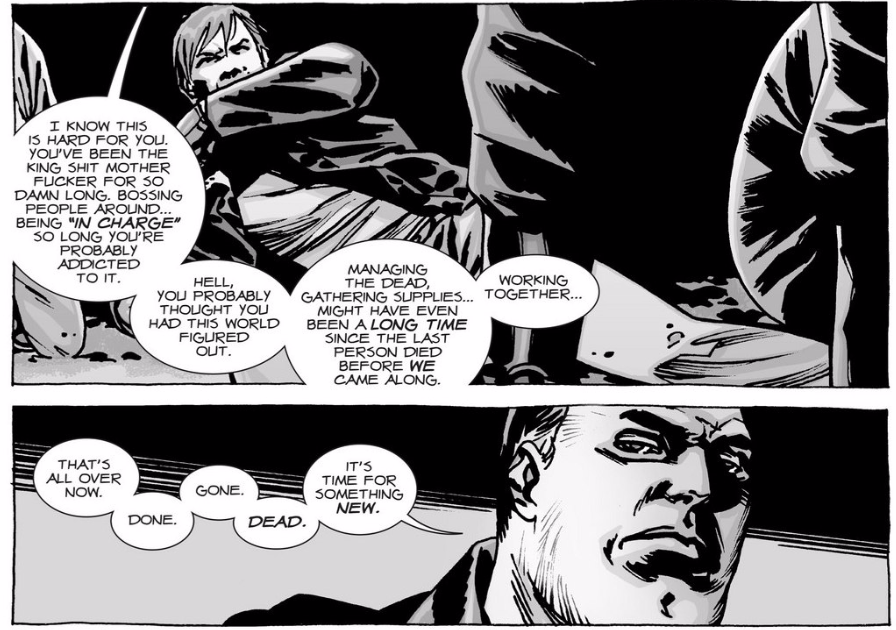 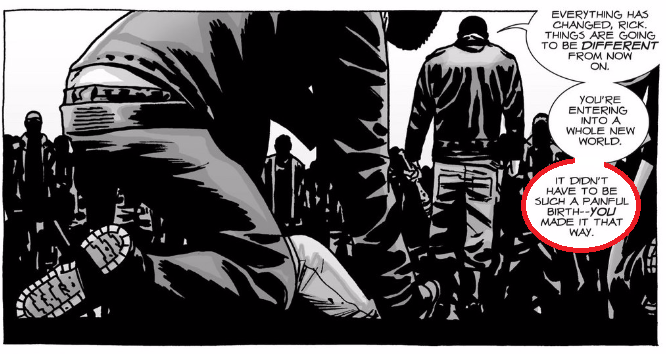 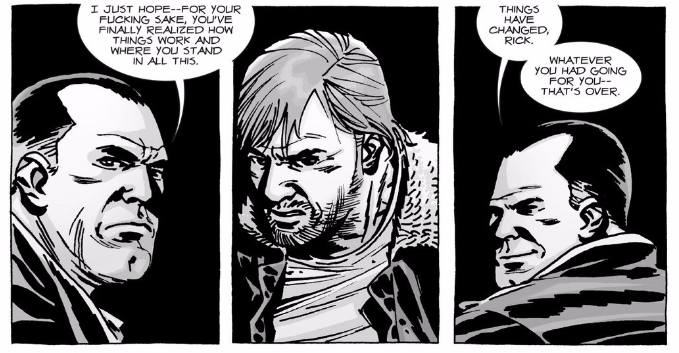 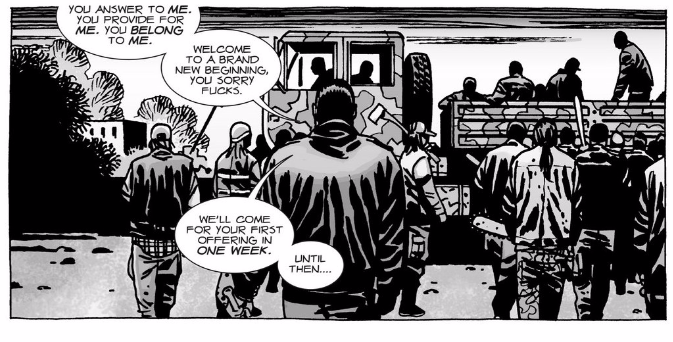 Well, you didn't really thing you were going to get through this without being punished, now did you?

I don't want to kill any of you... Let me make that clear right from the get-go. I want you working for me, and you can't very well do that when you're fucking dead, now can you? I'm not growing garden.

But you killed my men. A fucking whole goddamn lot of them. More than I feel comfortable with.

For that.. you gotta fucking pay.

You? How stupid do you think I am? You're practically invincible. You're missing a fucking hand for fuck's sake - and you're the leader. What have these people seen you live through?

I bet they fucking worship you. I'm not going to turn you into a martyr.

The name of the game is breaking you in front of them. I'll slide my [REDACTED] down your [REDACTED] and make you thank me for it. Then they'll all fall in line.

It didn't have to be such a painful birth - you made it that way.
- The Walking Dead, Issue #100, Something to Fear (all emphasis in the original)

Most importantly, Negan explicitly says that he wouldn't have killed anyone if Rick's group hadn't killed so many of Negan's men. If Rick hadn't gone to war with the Saviors, Negan would have either left him alone or simply said "Gimme half your stuff" without hurting anyone.

Of course, all of this is just how Negan expects it to work. Anyone who watches the show knows that Rick won't just roll over and say "that's it, we lost - he's our boss forever". And in fact, just after Negan kills [NAME REDACTED], Rick says "I'm going to kill you".

The fact that Negan doesn't retaliate for this threat probably means that Negan believes he's made his point, and everything has gone according to plan.

Would a single death phase Rick?

Yes. You mention some people Rick has lost over the course of the show. Let's take a look at them:

In a fundamental way, the situation we saw in the season six midseason finale is totally unprecedented. Rick is personally responsible for getting his group into this situation, and he made all the decisions that led Negan to kill [NAME REDACTED]. He told his group everything would be okay, he led his people to war, and now someone else is paying for it.

1The Saviors have killed 1 of Rick's people before Negan caught Rick and the others.
By this same point, Rick's group has killed:
8 Saviors on motorcycles.
18 Saviors at the armory.
7 Saviors at the slaughterhouse.
3 Saviors from Dwight's group on the railroad tracks.
4 Saviors in the pickup truck.
3 Saviors from another group, also on railroad tracks.

The number of Saviors killed by Rick's group may be slightly higher - I only included clear, incontestable deaths, but there was a lot of shooting at the armory, and there may have been some Saviors killed off-camera.

10
How did the Saviours know where Rick and the team would be travelling in the Season 6 finale?
4
Why did Lizzie think the walkers were still human?
2
Why did Edwin Jenner compare himself to Edward Jenner and his wife to Einstein?