What went on between Darth Vader and Ahsoka?

In Twilight of the Apprentice, Ahsoka's surprise attack slashed open Vader's mask. Vader called out to her, and she called back out to Anakin, stating that she will not leave him this time. For a moment, Vader's eyes appeared to show hesitation before finally hardening back and returning to his Vader persona, determined to push forward and kill Ahsoka. In the next scene, the season ending, Vader was seen emerging from the temple ruins, visibly weakened as he trodded slowly forward. The video I watched was not very HD: I thought I saw Ahsoka in the scene after that, disappearing into the darkness, but then it could just be the owl thing. The video isn't good enough to tell what happened.

What went through Vader/Anakin's mind at that moment when he hesitated? And what happened to Ahsoka? Was she spotted again in the episode after that?

It's not really hesitation, but it is a moment. Dave Filoni, the showrunner of Rebels, talks about this in a recent interview (emphasis mine):

Absolutely. As far as how Vader would treat Ahsoka and react to her, I base that interaction – the attitude, if not the dialogue – on my conversation with George about how that would go. I asked him pretty pointedly, "How would this conversation go? How would he feel about her?" We both agreed that the one thing that Ahsoka can't represent in any way is any path of redemption for Vader, or the hope that that's there because Luke is the only one that’s going to be able to make that happen. And that's the story that we see. It was our belief that we could have this moment, but it's not even a moment of hesitation for Vader. Because he says then, "You will die," and he means it. He is going to destroy her, and the reason that is, is that she has knowledge of him as a good person. She represents and is a vessel for everything that he once was, and he finds such pain in that, and hatred, and anger. He doesn't want to face what he’s become, but he just wants to destroy anything that reminds him of that former self. He doesn't even talk about Anakin in the movies, at first, and if he is that person. "That name no longer means anything to me." So we have to establish that Darth Vader and the destroyed character of Anakin. The moment you see it reach out in hope is when he says her name finally, and you hear the voice of Anakin. That's the only thing, is beyond this horrible person is this trapped person inside that calls to her.

As I understand Filoni's words, there is a little bit of the old Anakin reaching out, but it's basically immediately crushed by Vader. It's perhaps worth noting that this isn't wholly unprecedented for Vader; although it doesn't cause Anakin to resurface in any real sense, a flood of memories causes Vader to temporarily lose control in the canon novel Lords of the Sith, set about ten years earlier:

He'd floated alone in an escape pod over Ryloth once, spinning high over its surface, after crashing a cruiser into a droid control ship. Another name bobbed up and broke the surface of the sea of memory.

Ryloth filled the viewport as the ship descended. Seeing the mottled browns of its surface, the smears of green and tan, dredged memories of other times up from the sludge of his distant past, names he rarely thought of anymore. Anakin. Mace. Plo Koon...

Flames from the friction of atmospheric entry sheathed the ship. Fire surrounded them. Fire.

He used his ever-present anger to burn away the memories, but the charred husks of the past clung to the forefront of his consciousness.

He rarely allowed himself to think her name.

His rage slipped his control and he squeezed the control stick so hard it cracked. His breath came hard, fast, loud.

Lords of the Sith Chapter 10

The question of what happened to Ahsoka is answered (as much as is possible) here. However, I will at least confirm that the figure we see walking back into the Temple is not the Convor; it's clearly humanoid: 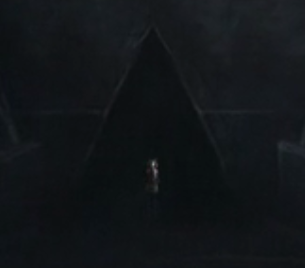 Although many fans speculate that it's Ahsoka, this has not yet been confirmed.

we can't "know" what went through his mind until that is revealed so anything currently would be speculation.

Regarding her fate and if she was spotted again:

Yes. It does appear that Ahsoka survived - http://i0.wp.com/makingstarwars.net/wp-content/uploads/2016/04/Twilight_of_the_Apprentice_61.jpeg

Ashoka is alive Filoni confirmed it and Vader left limping. Somhow she got the upper hand and was at a point where she could kill Vader. Vader pleaded to Ashoka "Finish me" but she couldnt bring herself to do it. She turns her back and leaves Vader limps away.

6
Where is Ahsoka Tano during the events of the original trilogy and beyond?
3
Who was speaking to Ahsoka when she spoke of revenge?

15
What comic is this scene between Darth Vader and C-3PO from?
0
Did JKR intend any parallels between Wormtail's sacrificed/artificial hand and Darth Vader?
5
Is Darth Vader Going to Appear in the Upcoming Star Wars Rebels Series?
42
What and how does Darth Vader see?
0
Did Darth Vader ever see Ahsoka again?
3
What does Rey know about Darth Vader?
2
Why didn't the Emperor and Vader learn from the encounter with Ahsoka?
8
Difference between Darth and Lord
3
How did Ezra save Ahsoka in “World Between Worlds”?