When were the Peverell and Slytherin families joined?

Voldemort was a descendant of Salazar Slytherin and Cadmus Peverell. Is there any source stating when the two families joined?

We aren't sure of the exact date or descendant, but we have upper and lower bounds; it was somewhere between the 13th and 18th centuries.

As Cadmus Peverell lived in 1214, we can say for sure that the two families were not united before that time, despite Salazar Slytherin being alive in the 10th century.

As Corvinus Gaunt is the descendant of both houses and was said in Pottermore to have defended the location of the Chamber of Secrets when Hogwarts first had plumbing installed, we can definitely say that the families were united by his lifetime.

As such, that leaves us with a range from the 13th through 18th centuries. This is a large space of time, but it's still the best answer we currently have. 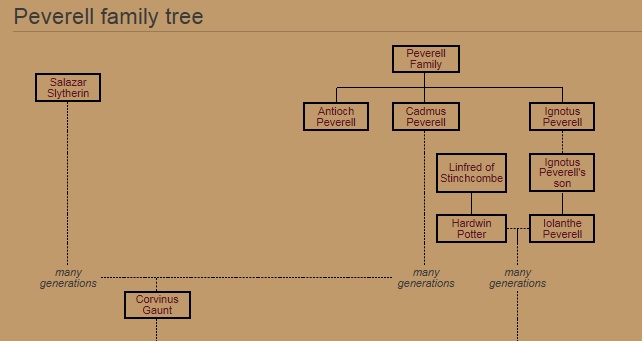 Not the answer you're looking for? Browse other questions tagged harry-potter voldemort slytherin genealogy or ask your own question.

8
Were the Peverell brothers and Salazar Slytherin related?