How is Anakin’s nickname spelt?

This question was inspired by Valorum’s answer to the question on what the Tuskens did with Shmi Skywalker.

In it, he quotes the following from the official Attack of the Clones novelisation:

Annie was her comfort, her place to hide from the pain the Tuskens had, and were, exacting upon her battered body.

Shmi (as it were) uses her usual nickname for her son, Anakin, which is pronounced /ˡani/. In this instance, it is spelt Annie, like the familiar female name/pet form of Anne.

Having seen most of the Star Wars movies with subtitles (usually either English or Danish)1 at one point or another, this surprised me, because the only spelling I have ever seen in subtitles is Ani, which I have to admit is at least a bit less gender-bendy than Annie. It never even occurred to me, truth be told, that Anakin’s nickname was homophonous with the female name.

Now I don’t know offhand where the subtitlers got their spelling from—movie scripts are frequently made available to subtitlers, but not always, and they may have had other means of enquiry as well—so I cannot say for certain which, if either, is more ‘authentic’.

I’m also not sure if subtitles for the movies or the novelisations should be considered higher canon—they seem about equal to me.

Is there any canon information (including out-of-universe commentary by directors, George Lucas, etc.) on what the preferred spelling of Anakin Skywalker’s nickname is?

1 I’ve seen one or two with Chinese subtitles, too, but that doesn’t really adduce much—the Chinese form, which I seem to recall is 阿尼, is based on the pronunciation, not the spelling.

It's "Annie" in the Phantom Menace Script, the Attack of the Clones script and the Revenge of the Sith script.

It's also "Annie" in each of the novels

The old lady smiled. “The heat’s never been kind to me, you know, Annie.”

Attack of the Clones Junior novelisation

"When you say Annie it’s like I’m still a little boy. And I’m not.”

Attack of the Clones Adult novelisation

“Oh, Annie, you’ll always be that little boy I knew on Tatooine,” she said

Revenge of the Sith Junior novelisation

Revenge of the Sith Adult novelisation

And the Attack of the Clones Cine-Manga

And the Attack of the Clones Graphic Novelisation 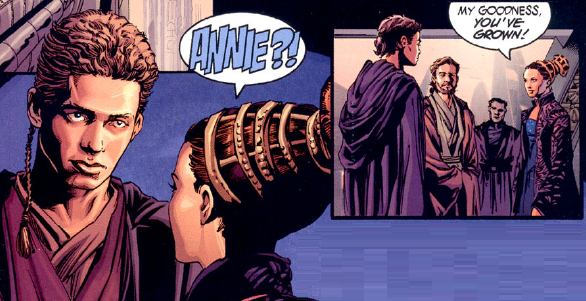 It's important to remember that novels tend to spell things a bit more phonetically (or in some cases in a familiar way) so that the reader pronounces it correctly. For instance, in the Timothy Zahn EU novels, Luke refers to R2D2 as R2, but the novel prefers to spell it Artoo (article with phonetic spelling).

Every spelling I've seen outside of novels or screen plays has his nickname spelled as Ani (and that would be in keeping with the spelling of his name, which is typically shortened and not radically changed). The Star Wars Wikia page seems to suggest this was in the subtitles of Episodes I and III

I couldn't help but notice that you didn't specify what language/script you were talking about.

Anakin (and most people in the Galaxy Far Far Away) uses Galactic Basic.

Thus, his preferred spelling of his name is

Not the answer you're looking for? Browse other questions tagged star-wars names the-phantom-menace attack-of-the-clones anakin-skywalker or ask your own question.

22
Padmé's change of role in Naboo and in the Senate
21
What do the sand people do with Anakin's mother?

32
How powerful was Darth Maul?
7
Why is Jon Vander's nickname "Dutch"?
10
How force-powerful is Anakin?
13
Why is Luke Skywalker's nickname "Wormie"?
6
How did the Jedi rescuers arrive on Geonosis?
7
How did Anakin Skywalker learn Force Choke?
6
Did Anakin’s childhood friends hear of Luke Skywalker?
11
How was Jango Fett chosen?
11
How does Anakin get his weapon back?