Who is Lex Luthor referring to at the end of Batman vs Superman?

In Batman vs. Superman, after Lex Luthor is put in prison. Batman visits him and he says "Wherever you go. Whatever you Do. I'll be watching you." For which, Luthor replies...

Lex Luthor : But, the bells have already been rung and they've heard it. Out in the dark. Among the stars. Ding dong, the God is dead. The bells, cannot be unrung! He's hungry. He's found us. And He's coming!

It's a setup for a sequel, so there is not enough information in the movie itself to say for sure, but it's a pretty good bet it'll be Darkseid, since one of Batman's dreams featured Darkseid's Omega symbol and winged beings that look like parademons, Darkseid's flying troops. See this article for some more discussion.

As for how Luthor would know, I can't say for sure, but KutuluMike pointed out in a comment that Warner Brothers has released this deleted scene of Luthor on a Kryptonian ship, apparently communing with the hologram of a being that seems to be holding some mother boxes (the type of computer used on Darkseid's planet Apokolips, as well as his enemies on New Genesis), some have speculated this being could be one of Darkseid's generals named Steppenwolf, or Darkseid's father Yuga Khan. Hopefully the Justice League movie will explain Luthor's knowledge of the threat in more detail, along with explaining why Batman would be having some kind of precognition of the future when he isn't normally psychic, rather than just treating this stuff as "foreshadowing".

From this page which offers a good rundown on Darkseid, here's a shot from a comic of Darkseid showing off his Omega symbol:

And here's the same symbol burned into the landscape in Batman's dream:

Here are the parademons in the comic: 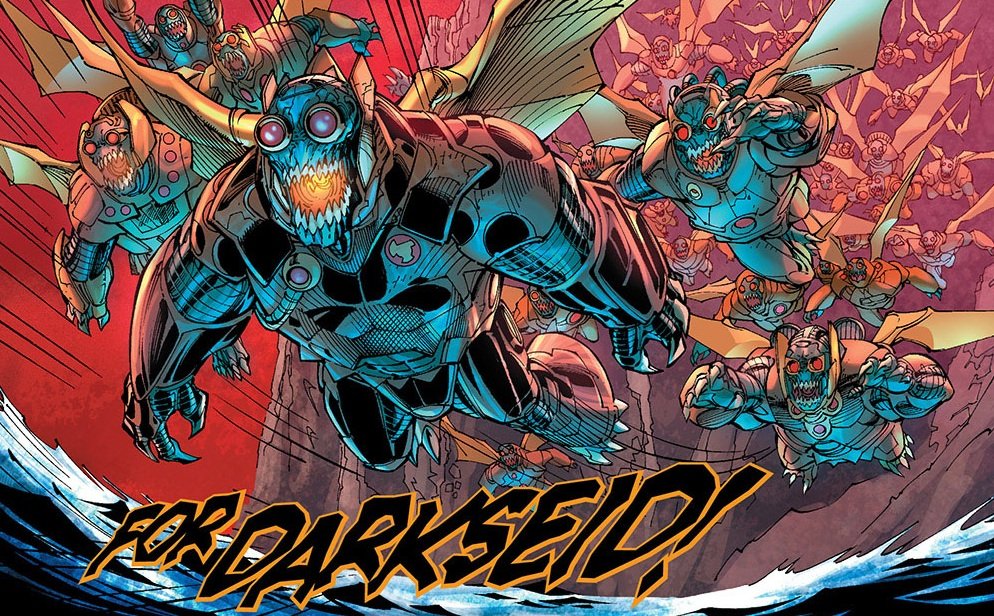 And some of the flying things in Batman's dream:

A close up showing what looks like glowing red eyes: 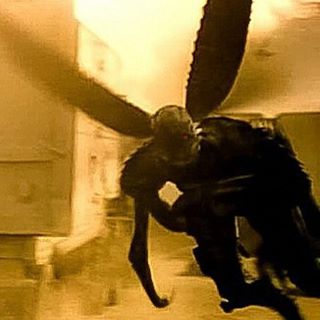 The reference is to the villain Darkseid, hence setting up the sequel. There are many other references to Darkseid's coming in the movie itself such as the dream which Bruce had about a universe where Superman turned evil.

At the starting of the scene there is a big juicy reference for us, the Omega Symbol, symbolizing Darkseid.

The main question at the end of the movie is how in the world did Lex Luthor know about Darkseid? The answer is that there is a deleted scene in the movie.

Titled rightly so as "Communion", it shows one of Darkseid's minions showing/telling Lex about Darkseid.

Flash run to the future or other demsion. I beleive he was able to run fast enough to comunicate to bruce but not for long.

A simple explination of how batman saw the premonitions is that batman exist in multiple universes, what he might have been seeing is a parralel universe bleedover, like when a superhero sees a split decision alternate. Another explination is that some of the justice league has pyscic ability, and he was therefore recieving a jumbled up peice of a message from a possible future timeline from say aquaman or martian man hunter or even wonderwoman all of which at some point have shown psychic ability of one sort or another. Finally batman has come into contact with many pyschic heroes and villans, and it is entirely likely that they will use the ol magick explination (dc has been known to do that) after all we are talking about a universe where wonder woman the daughter of a god exist (therefore gods and magick must also exist) some stuff to chew on in any case

Not the answer you're looking for? Browse other questions tagged dc dc-extended-universe batman-v-superman-dawn-of-justice lex-luthor or ask your own question.