Are Hera Syndulla and Kanan Jarrus in love?

Watching the interactions between Hera and Kanan - especially when they are alone - I get a weird vibe that there is more to their relationship than just close friends and fellow rebels. It could be just me, maybe it's really just a boring normal friendship - I don't really have experience in this field. I just find it intriguing that Hera and Kanan open up to each other in ways they don't to others, not even Ahsoka - not just with regards to the secrets they hold inside them, but also a hidden side of their selves altogether.

Of course, Jedi cannot have that kind of relationships, but that does not mean they are not liable to experiencing the same underlying emotions - it won't be the first time, after all.

Is there any romantic attraction at play here, either reciprocal or just one-sided?

The implication is that their relationship status is pretty well established. They appear to be in a committed monogamous relationship, albeit one they keep almost totally hidden from the rest of the crew and us, the audience. There's also a certain element of not really wanting to admit to each other how close they've gotten. Hera also uses her close relationship with Kanan to manipulate him (emotionally) into doing things her way, especially when she calls him "love".

This dialogue from "A New Dawn" (before the start of Rebels) strongly implies that while Hera is open to flirtation, she's really not interested in maintaining a serious relationship.

He obviously liked her starship, she could see as he walked around it. That was good. He was also smitten with her, she could tell—and she was all right with that, too. She didn’t want to tell him that her war had already begun, and that in war, there was no time for anything else. He would probably understand that eventually.

With that in mind, in the short "The Machine in the Ghost", they're clearly about to kiss when interrupted by Chopper. After a brief bit of banter, they give him a bunch of chores to do elsewhere on the ship, the metaphorical equivalent of giving him $10 to bugger off to the cinema.

And in the Star Wars: Rebels - Rise of the Rebels novel, we have the following internal voice from Hera's perspective:

There was nothing but static. If the TIE’s blasts had somehow hit the turret and she’d lost Kanan, she didn’t know what she’d do. Kanan Jarrus was more than a friend or a colleague. The human meant the world to her—although she’d never admit it to him.

and this quote from Hera's character actor Vanessa Marshall shows that the relationship is a lot deeper than even she's been told!

So I don’t see much schmaltzy romance, on the page. When I watch the episodes and I’ve seen some gestures and body language that wasn’t described in the script, as far as I recall, I thought, “woah, wait a minute!” I remember being at Star Wars Weekends and they played that initial short where the two of them are bickering and Chopper is going between them. At the end, they sort of come together, and I remember sitting there watching it, going “hey now! What was that?” Everyone was asking me, and I had no idea! I didn’t get a sense of that while reading it or recording it! So it’s interesting to me to allow what may happen in the animation, a caress or a look, that indicates a deeper connection.

And of course, the final season makes it abundantly clear. They kiss, she tells him that she's in love with him and they ultimately have a child together

I'd always assumed that they were in a full de facto relationship, but because Rebels was made for a younger audience the writers wanted to keep it relatively PG. There is something about their body language when they're together. Here's one example: 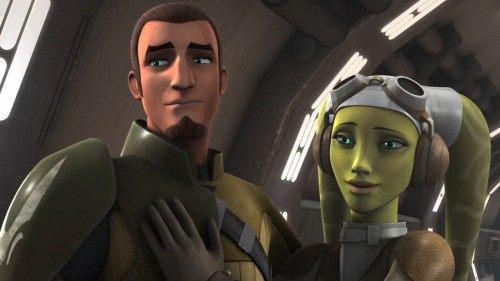 A man and a woman just don't get in each other's personal space like that unless they've been given permission. Although nothing is ever said, in dialogue, most older viewers pick up on the body language and draw the inevitable conclusion.

So, there's probably some smooching and kanoodling going on, but it's all happening behind closed doors. And the kiddies notwithstanding, if they're in an established relationship there probably isn't much to be gained (in a dramatic sense) from showing the romantic stuff anyway.

Welp Hera does refer to Kanan as "my love" in one of the last two episodes of the current season (the season with the episode "twin suns") so unless this is a figure of speech that I've never heard of seems fairly indicative of a relationship.

From part 2 of the Season Three finale:

Hera: Kanan? Kanan, do you copy?

Hera: Oh, that is only funny because you're still alive. Now, please, come home, love.

Not the answer you're looking for? Browse other questions tagged star-wars star-wars-rebels love or ask your own question.

23
When and why did Harry Potter fall in love with Ginny Weasley?
8
Are Rey and Finn in Love?
9
Are Love Potions actually banned at Hogwarts?
3
Why Does the Blinded Kanan Jarrus Wear a Mask?
1
How are programs from the Matrix capable of love?