What short story is about an invasion from metallic creatures?

I used to have a bunch of used short form books when I was growing up that I have since long lost, and I remember a story about an invasion of Earth by some metallic creatures that I never finished but still intrigues me.

A guy comes home from work and finds that the key to his house doesn't work. He tries to open the lock but finds that he can't even force it open, so he calls a friend over and he can't open the door either. So he calls a locksmith and neighbors, etc., who can't get it open.

After a while the door (and his house) are becoming metal. Ends up that his house is the target of some kind of alien invasion and they are slowly transforming the world into metal and using his house as a foothold.

Over time his neighborhood and surrounding countryside are metal and by the end humans are fighting the creatures that are trying to "terraform" the planet, and they too are made of metal.

I remember that in the story the growth of this invasion starts to raise the temperature of the planet and I don't remember how it ended ...

The name of the book is No Truce With Terra by Phillip E. High. 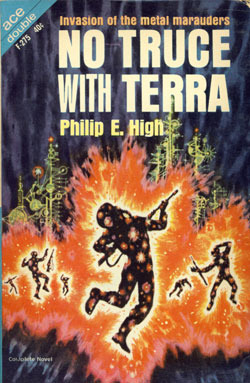 A summary can be found here:

This novel begins with a scientist returning to his home only to find it impregnable -- apparently occupied by some strange being, quickly identified as an alien. These aliens seem to be metallic in nature, and to use electricity as a motivating force. They also seem all-powerful, capable of vaporizing attackers. They come in many rather terrifying forms. Soon all of England, and by extension the world, is under threat.

The scientist and a couple of friends, however, are able to analyze the aliens' means of transport, some sort of interdimensional warp gate. They copy the technology and by hit or miss open a gate to yet another planet. Their main thought is to hope at best for a lucky solution to the invader problem, or at least possibly to use this new planet as a refuge. This planet is at a low-tech developmental state, but it is also being monitored by some very advanced aliens, who soon detect the humans. These aliens make contact with the humans, and quickly offer their help.

Meanwhile, back on Earth the battle against the electronic invaders is going poorly. Even nuclear weapons are useless. But the new aliens do have some ideas ...

Here's a sample from the early stages of the book itself, showing how the story develops as described in the first couple of paragraphs of the OP:

Lipscombe turned the car off the road and pulled up in the short drive leading to the garage. [...] He inserted his key in the lock and turned. "Funny!" He pushed slightly at the door and turned the key again.

Lipscombe said, "The door won't open." He turned the key again, frowning. "Damn funny." He made three more attempts, then walked quickly across the small lawn and peered through the window. "Strange, can't see a thing; looks as if the pane has been blacked on the inside. Hold on, I'll try the back."
He returned some seconds later, scowling. "Back door won't open either and I've tried the spare key."
[...]
A police car containing one constable and a sharp faced individual with a tool box arrived within ten minutes.
The constable first satisfied himself as to Lipscombe's ownership of the property then permitted the locksmith to attack the door.
[...]
"This is strange." Collard was bending down studying the door. "This resembles no plastic I know."
"What!" Lipscombe was shaken; Collard was a specialist in plastics.
[...]
At the end of the week an army of experts equipped with drills, torches, a power-ram and even a small bulldozer had retired defeated. But the house had aroused other interest: experts measuring the surface reported that the structure did not conform to the plans provided by the local surveyor. Further checks showed that, slowly but surely, the house was changing shape.
[...]
One night, during their absence, and close to the front door, something grew. The scientists, after long conference, decided it was a plant but it didn't look like a plant.
[...]
Two days later there was another growth. This was a small brass colored sphere about the size of a walnut perched on the top of a thin black rod about two feet in height.

I think I have read this book or something very similar.

I think that the title was something of a play on words or possibly something involving the letters "tri" as the metallic creatures were possibly triangular in shape.

I seem to remember that an atomic bomb was used to attempt to kill the massing creatures, but that this didn't work.

Hope that helps someone else trying to remember the title, I would probably have read it around the same time as the person asking the question.

Perhaps it's this book?

I believe this might be Invaders from Rigel, by Fletcher Pratt. A comet (actually the invaders' spaceship) mysteriously causes everyone to turn into metal robot-like creatures (!). I remember buying it as a kid in the 1970s from a bargain bin at K-Mart.

Having trouble uploading the picture, but this cover is the version I have.