Evidence of what the big alien at the end of Men in Black looks like?

At the very end of Men in Black (the movie), we zoom out into space and then eventually it appears that our galaxy is just something inside a marble that some huge alien is playing with, but we never directly see what this alien looks like... or do we? 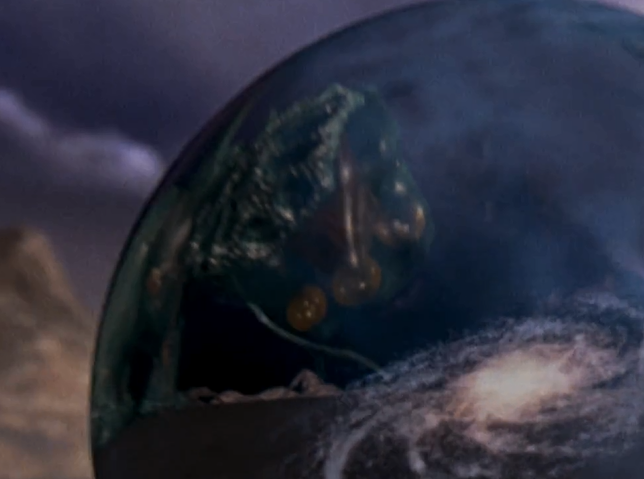 If you pause on the Milky Way during zoom out, you can see a warped reflection of the alien. You can see the foot in the reflection raise up off the ground at the same time as the real alien's foot, so there is a bit of reference there, but other than that, it's hard to tell. There also appears to be an extra arm sticking out somewhere. You can also see a reflection off the marble that the alien fires the first marble at. 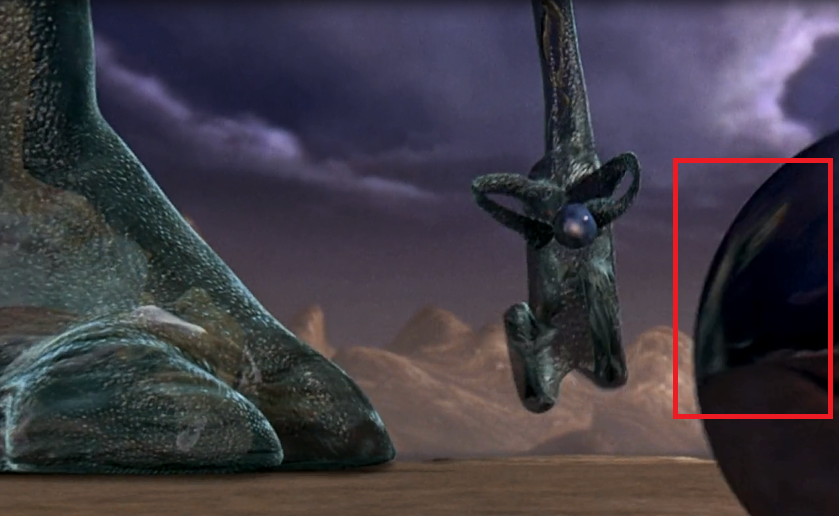 However, I can't tell what on earth I am looking at. I get confused over the fact that the fingers don't really show up in the reflection as he reaches down. In fact, the reflection sort of recedes away from the marble. So the three yellow orb things I cannot tell if that is part of the head, or an arm, or what. The other marble shows the alien as tall and hung-over in some way.

And then a final zoom out shows that there's some kind of head or blob on top of this thing. 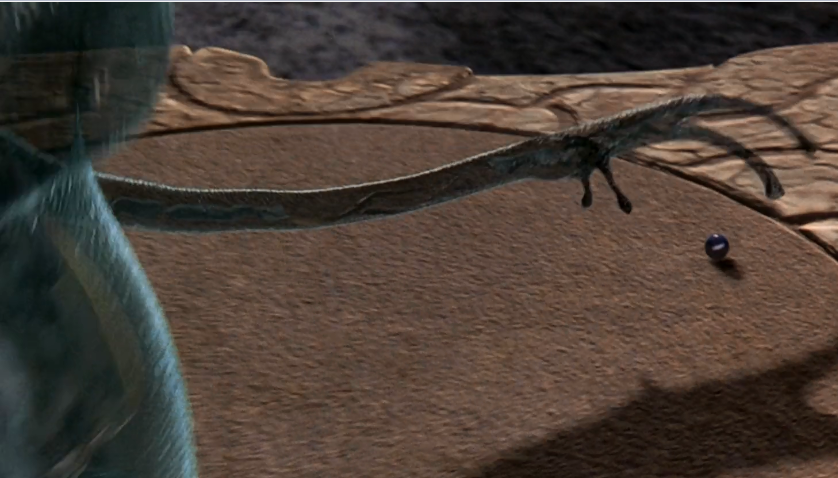 Maybe someone else here has a better understand if reflection physics. What exactly do the reflections imply the alien looks like?

The things we know from the scene are limited, so I did the same thing: snap the film and analyze.

Here are two shots of the alien's palm: 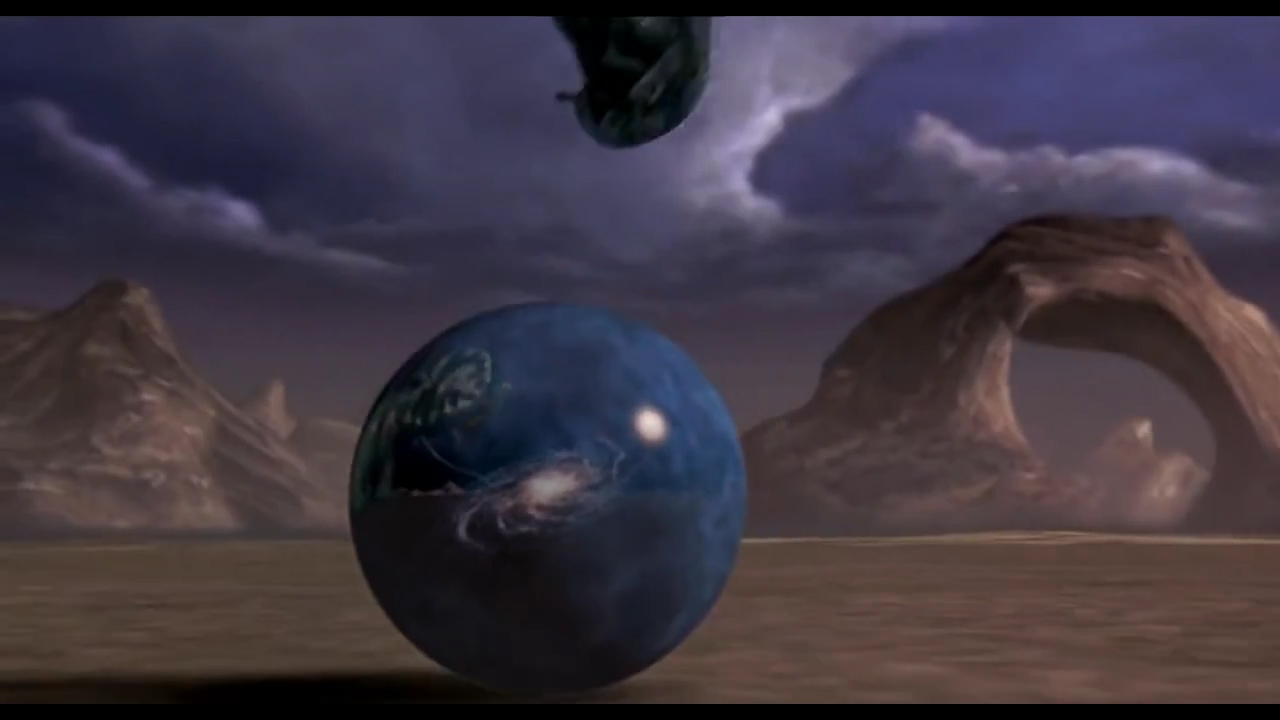 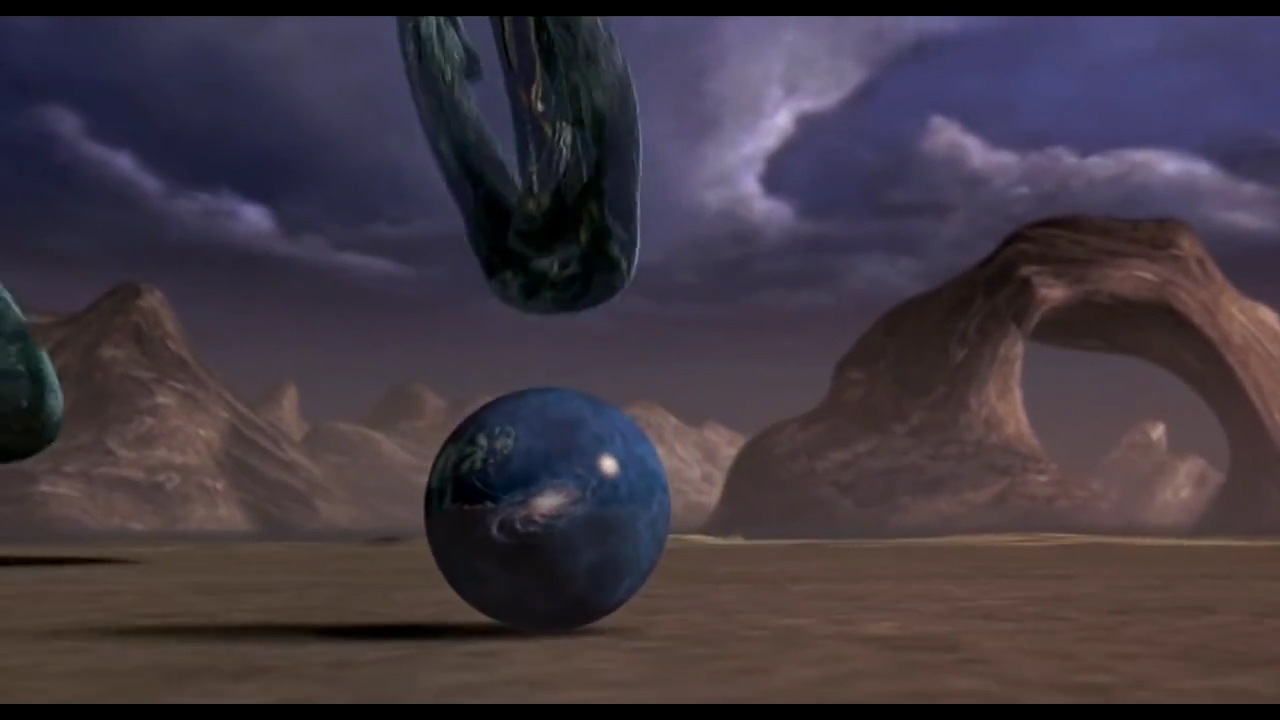 From the yellow things you mention, I guess it is the eyes of the alien. We can also see a red triangular thing, which I guess is the part of the alien's nose. So the scene we can imagine is that the alien curls up its finger, bends over and watches the marble closely, then raises its body，moves its foot，stretches out the finger and picks up the marble.

To sum up: we know the alien has transparent skin，and we know what its finger, arm, foot, and head look like. I can't tell you what the alien look like in full. I thought the director would reveal the truth in Men in Black 3, but they didn't. The quality of the stills I took isn't very clear, perhaps we could see more detail if we took stills from the Blu-Ray release.

Not the answer you're looking for? Browse other questions tagged movie character-identification men-in-black or ask your own question.

-4
How big is the alien shown at the end of the first Men In Black?

11
In “Men in Black,” why did Agent K neuralize every civilian who saw an alien?
16
Are the Men in Black an international organisation?
5
Seeking alien invasion movie
13
Looking for a sci-fi movie in which a human astronaut befriends an alien on a reddish planet
10
Looking for name of sci-fi/horror movie about alien disguised as father
11
Movie in which aliens disguise one of them as a cartoon chicken, mistakingly thinking it will help him blend on Earth
5
Movie about teenagers who get abducted by aliens after they enter a house
7
Movie where child-sized, mushrooms-eating aliens are us from the future