Upon arriving in 1984, Skynet's T-800 is disabled by Sarah and a reprogrammed T-800 Guardian sent from an unknown origin to protect her when she was nine years old; Sarah has nicknamed the T-800 "Pops". Kyle arrives a short time later and is immediately attacked by a T-1000 Sarah and the Guardian join Kyle and destroy the T-1000 using acid. It's revealed that Sarah and the Guardian have constructed a makeshift time machine similar to Skynet's, and Sarah plans to travel to 1997 to prevent Skynet from becoming self-aware. Realizing the timeline has been altered, Kyle is convinced that the future has changed due to the warning he received in his childhood vision. He persuades Sarah to travel to 2017 instead to stop Skynet. sarah raised by pops in 1973, visions of kyle reeses kid self, Matt smith is skynet, john conner is a terminator

The video you've linked was apparently written by someone who really didn't understand the films. There are far more than three timelines and far more inconsistency then they're giving credit for.

Terminator (1) is best described as the Prime timeline. In it, Skynet becomes self-aware on its own and initiates Judgement day. After a brief war with the humans, it realises it's lost and sends back a Terminator to kill the head of the Human Resistance, not realising that in doing so, it's actually creating a predestination paradox in which it's complicit in John's birth.

Terminator 2 opens in the Prime timeline (in which John and his mother have been working to undermine Skynet and to prepare him for war) but Skynet once again becomes the instrument of its own destruction by forcing John to send a T-800 into the past along with detailed plans on how to stop Skynet from being built. This creates a new timeline in which Judgement day doesn't happen at all (Timeline 2).

Unfortunately, Skynet isn't an idiot and has already sent back a T-X (which arrives in Timeline 2) to make sure that John's lieutenants are killed and to jump-start its own creation. This works and it creates a third timeline in which Skynet once again becomes self-aware and initiates Judgement Day. (Timeline 3).

T4 (Salvation) takes place shortly after Judgement Day. The events occur within Timeline 3 and can largely be ignored. 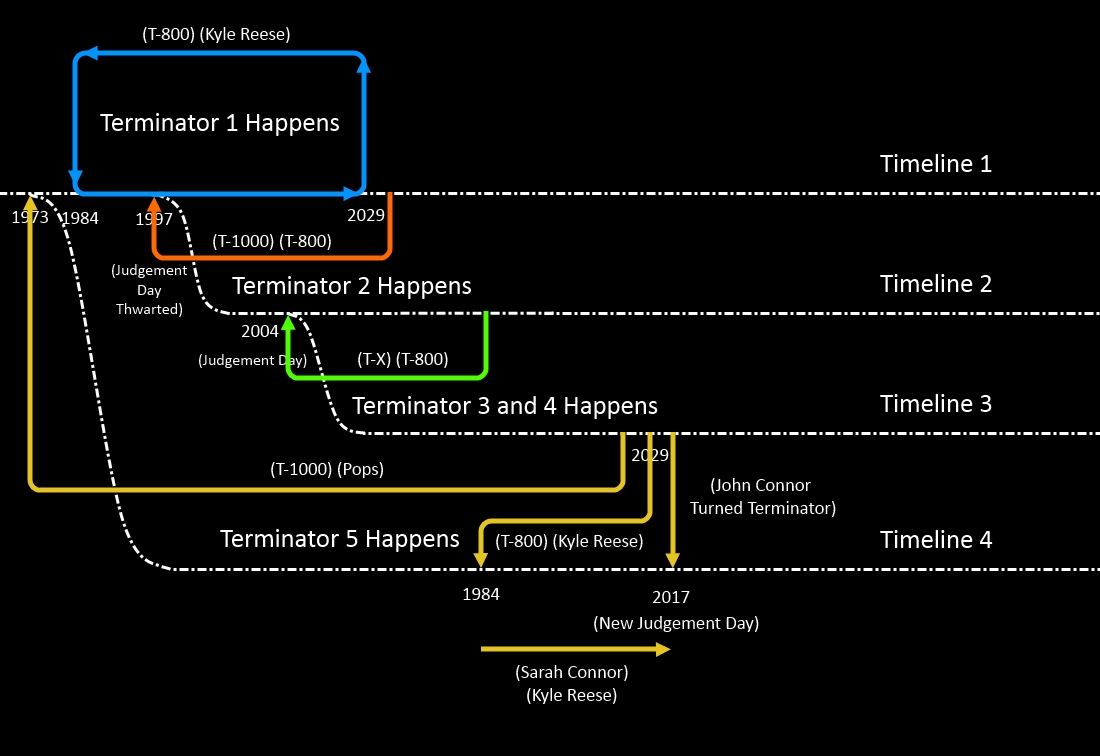 Not the answer you're looking for? Browse other questions tagged the-terminator-series terminator-genisys or ask your own question.

28
How was Skynet created in the original timeline?
10
What stops Skynet from just sending later cyborgs back to the same time they sent the first terminator?
7
Did Future John experience the events of Terminator 2?
10
How did the T-1000 reactivate the young T-800 by putting the liquid metal into his eye?
25
Who sent the T-800 nicknamed "Pops"?
23
How did the Resistance manage to win the war and destroy Skynet in the future?
4
Why didn't Reese and Sarah go to 1997?
5
Why was Kyle Reese so important in Salvation?