Why was Snarl not in The Transformers: The Movie?

Snarl appeared only very briefly in The Transformers: The Movie: 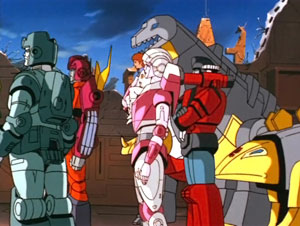 However, neither the Wikipedia article nor the Transformers wiki provide a decent answer.

I'm looking for a real world answer, but if there is a decent in universe answer as well, then that is a bonus.

I decided to email the voice actor (Hal Rayle) who played Snarl in the original Transformers series.

Question: Was there any reason that Snarl had such a limited role in The Transformers Movie (1986) ?

Hal Rayle: It was out of my control. Based on other powers that be.

Question: Perhaps you could elaborate a little more. Was it simply that the character was forgotten (due to the large cast of the movie) or was there a decision by someone to minimize that character?

Hal Rayle: It was out of my hands. I suspect it had to do with toy sales and the powers that be.

I think it's because Snarl is solar powered and therefore may not be of use in space missions. This was the only excuse I could come up with that is nerd-worthy.

His unique design makes Snarl particularly useful in sunny, arid environments. The large golden plates protruding from his spinal assembly are solar collectors. Although he can operate without sunlight, solar energy can increase his strength tenfold and his endurance to a virtually limitless degree. A swipe of his tail can shatter a 20-foot concrete cube. His heavily armored hide makes him resistant to most missile fire.

Snarl's dependency on sunlight makes him extremely vulnerable to attack at night. Although he can use the same fuel the other Autobots use, he operates at only a fraction of his strength when he does. He is also very slow and his uncooperative behavior patterns sometimes hinder his effectivess in dangerous situations.

- Wikipedia's page on him