The Prometheus class ship is said to be the fastest in Starfleet at a blazing 9.99 warp. Please forgive my maths shortcoming but I can't get my head around this number. I know the equation is here on Stack Exchange and elsewhere but it's Greek to me. I know light speed is 186,000 miles per second and that warp 9.99 is not 186,000 x 9.99. In laymen's terms, how fast is that? Ten times light speed? Ten thousand times light speed? What? Please speak slowly. 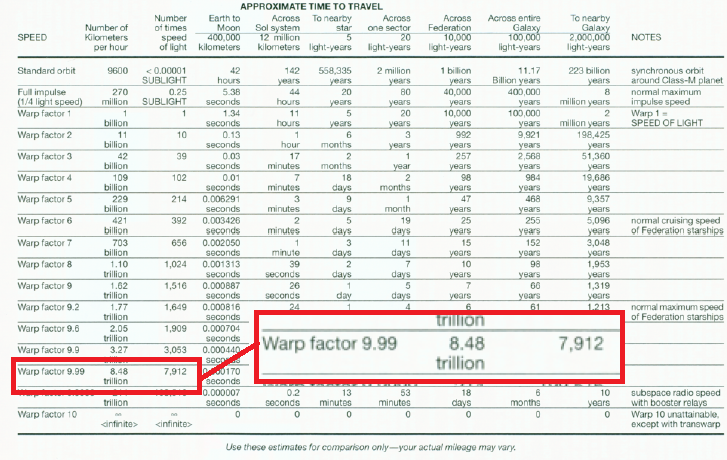 As you can see from the handy diagram below, as you approach Warp 10 (infinite speed), your velocity increases exponentially. Warp 9.9 is half the speed of warp 9.99 and warp 9.9999 is over 30 times faster than warp 9.9, etc. 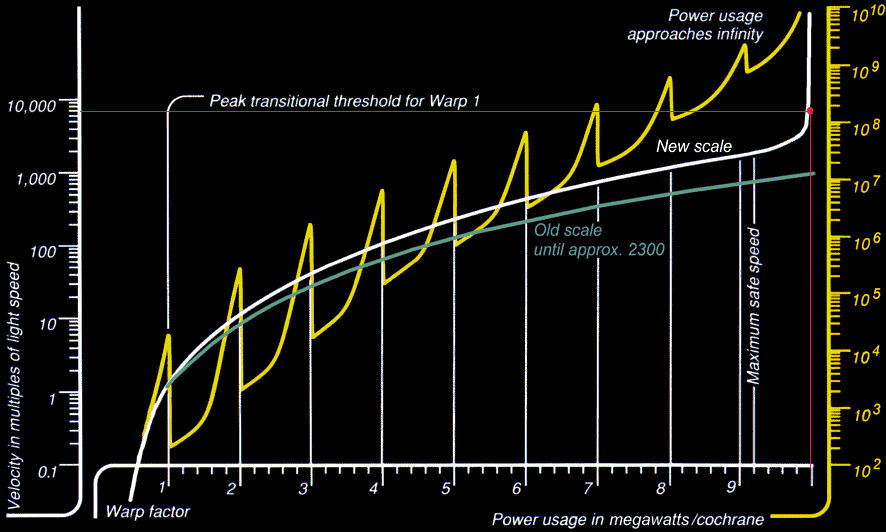 The answer is 7912 times the speed of light, but, as the equation is good up to Warp 9 only, this number has been

extrapolated from the hand-drawn curve from the Star Trek: The Next Generation Technical Manual.

If you omit the number and the "TNG" part, you get a calculator with a drop-down menu to choose either TOS or TNG formula.

A problem with the warp chart is that warp 5 is shown to travel 214 times the speed of light, but that is incorrect according to Star trek enterprise. In Enterprise, the ship can only go at top speed of warp 5, meaning Enterprise could travel 214 light years in one year. But the Enterprise is able to make it to the Klingon home world, Qo'nos, a few weeks. But Qo'nos is in the Leonis system, 108 light years from earth. So going by the warp chart, it should've taken the Enterprise half a year to reach Qo'nos, but that definitely isn't the case.

Actually, from on-screen dialogue, the USS Prometheus traveled towards Romulan space at Warp 9.9 (not 9.99).

And since no SF ship prior to Voyager (nor even Voyager) was actually seen using Warp 9.9 (even though it was stated that Voyager's cruising speed was Warp 9.975), its safe to say that the writers were overzealous in their sustainable cruise speed for Voyager. Either that... or Voyager was indeed the first ship capable of achieving Warp 9.975, but the damage they suffered in the transition to the DQ destroyed that capability.

And indeed, we mostly see Voyager cruising at Warp 6 back to the Federation, with minor increases to Warp 8 or even 9 to make up for lost time. The only time we saw them using Warp 9.9 was in the episode 'Threshold', and in that episode, when they approached Warp 9.9, the computer said 'nearing maximum Warp velocity, structural collapse is imminent'.Chakotay then ordered to slow down to Warp 9.5 to stop the ship from shaking itself apart.

We also know from TNG 'Where no one has gone before' episode in Season 1, that at Ent-D maximum Warp, it would take the ship just over 300 years to get back to the Federation. At that time, The Enterprise-D could achieve Warp 9.6 for limited period of time (which we could say would be a rough 'maximum velocity). That's also roughly 9,000 times the speed of light.

Also, there are at least two instances in TNG where raising the velocity of the ship from Warp 8.7, to Warp 9, cut the time needed to arrive at a destination from 14 hours to 5 hours (that's about 180% increase in speed from just 2 decimals). Most notably, in TNG it was in the episode Gambit (season 7).

The base premise behind this is that past Warp 9.9, every increment results in exponential (double) increase in velocity (and also power expenditure). Granted, SF would eventually find a way to compensate for the power expenditure, and hull stresses, allowing greater speeds at Warp.

I wouldn't be surprised if SF decided to use aspects of soliton wave technology to greatly increase the efficiency of Warp engines though.

But, as for the USS Prometheus, the official on-screen dialogue never says what the ship's maximum speed is. However, when the EMH Mark 1 said they were at Warp 9.9 heading straight for Romulan space, the EMH Mark 2 promptly responded with 'this ship was designed to go faster than anything in the fleet, so we'll never be rescued'.

The USS Prometheus was comfortably sustaining Warp 9.9 without any issues. But whether that was its maximum speed is unknown. Warp 9.9 could have been the maximum sustainable cruise velocity for USS Prometheus.

One way of another, what we saw on-screen tells us that Voyager never attained Warp 9.975, let alone sustained it. It didn't even manage to sustain Warp 9.9 in Threshold episode for more than 30 seconds. And it was seen cruising usually at Warp 6.

Now, if Paris statement is taken at face value (and he's a Starship pilot), so the claim that Warp 9.9 = 21 473 times C actually fits what we saw generally of most SF ships when they were using Warp from TNG, to DS9, and even VOY.

32
When/How would Star Trek captains update their log?
7
How many Star Trek species possess 'mega-strength'?
13
Was warp 14.1 the fastest warp in Star Trek?
12
How fast can Data run?
10
Canon inconsistency regarding Star Trek warp drive
3
How did Voyager reach the wreckage so fast going warp 2?
12
How are residences assigned in Star Trek?
4
Warp - Warp collisions / battle in Star Trek