How much of Wolverine has to be left to heal?

Clearly, if Wolverine bleeds on the ground, a new Wolverine doesn't reconstitute himself from the drop. Presumably, if somehow his arm could be severed, that wouldn't happen there, either. If his head were cut off...probably not either.

So it seems that there's a minimum amount of contiguous body mass Wolverine has to have from which he can heal.

Maybe limbs are the limit...are there examples of Wolverine regenerating a lost limb? If so, well, this question. If not, is there anything else in the canon to suggest an answer?

To answer this, we'd need a couple of experiments:

In one comic, he was burned to ashes using Napalm, so even living tissue in pockets in the andamantium would have been cooked, so the last one has been answered. I haven't seen him being cut enough because of his skeleton, though. Shooting his head doesn't kill him, either.

My current stance is that is ability isn't in fact linked to his body - if there is a body left, it will use it as a starting point but he would regenerate from thin air even with the whole body completely destroyed.

But to answer this, we'd need to know whether the authors at Marvel have an idea how Wolverine really works. Maybe they just make things up as the stories unfold and don't bother too much about continuity.

Wolverine's healing powers evolved over time. At first, he could just heal simple wounds faster than average. At 1:50, he says: "After being caught in an atomic explosion, Wolverine was capable of regenerating all his tissue and muscle within minutes."

The important part starts around 2:00: "According to the Xavier Protocols, created by Professor X, the only way to truly kill Wolverine is to decapitate him and to keep his head far from his body."

From the Xavier Protocol:

Long range attack, sever the head, and place the head and body far apart.
Note: This assumes Wolverine is without his adamantium skeleton.

I'm not sure why the adamantium plays a role here. If the adamantium was just a coating or replacement of the bone structure, you can easily pull the neck bones apart after removing the tissue: They don't interlock in any way.

But if that was his weak spot, I'd design his backbone to prevent separation.

In the Civil War Marvel event, Wolverine is standing right next to Nitro when he goes off and we see him stripped away down to his Skeleton. He is able to regenerate from this, so presumably the only thing he couldn't regenerate from would be someone removing his Adamantium and then annihilating his entire body.

In Ultimate Wolverine vs. Hulk,

Hulk rips Wolverine in half (at the waist).
After he awakens, Wolverine has to crawl to the top of the mountain to retrieve his legs. He does not regenerate during this time.

Later in the same series, Wolverine is

a "head on a platter", and he does not regenerate until later.

the anterior lobe of the pituitary gland in the brain SHOULD by all accounts of logic and science, need to be in tact and functional. So as long as that is withstanding, he should be able to regenerate along with a single cell.

Depends on the incarnation, but assuming we're talking about "616" Wolverine, the answer is nothing of Wolverine needs to exist for him to regenerate. How do we know this? Because this has happened in the comics.

Basically it works out that Wolverine can regenerate normally so long as 1 cell of his body exists. If all cells of Wolverine are destroyed he... It's been a few years since I looked into it so I might be wrong on this part, but I think it's that he battles or plays a game with death where if he wins he comes back to life and regens, but if he doesn't win. I don't know because apparently it has never happened.

Wikipedia says the following to correct me on the above paragraph:

Among the more extreme depictions of Wolverine's healing factor include fully healing after being caught near the center of an atomic explosion and the total regeneration of his soft body tissue, within a matter of minutes, after having it incinerated from his skeleton. An explanation is given in a recent mini-series starring Wolverine for the increase of his healing powers. In the series, Wolverine is referred to as an "adaptive self-healer" after undergoing numerous traumatic injuries to test the efficiency of his healing factor. Wolverine has endured so much trauma, and so frequently, that his healing factor has adapted, becoming faster and more efficient to cope with increasing levels of trauma. 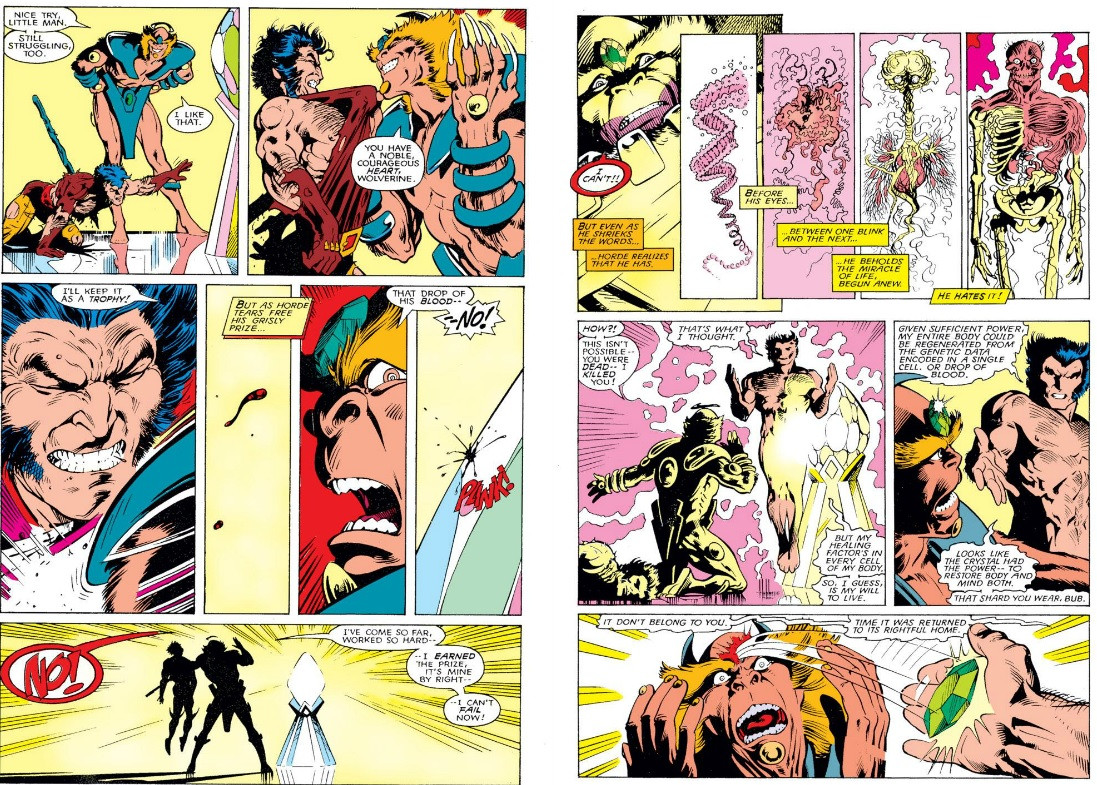 This shows Wolverine healing from a single drop of blood due to amping up of his powers... Since that above is true, then the amping seen here could be true of his modern state before his recent depowering, without the need of an amping agent like the crystal.

In Wolverine vol. 3, #57 it is revealed that, when Wolverine is injured so seriously that his body actually dies before his healing factor can repair the damage, he returns to life by fighting with Azrael, the Angel of Death, while trapped in Purgatory, due to Wolverine defeating Azrael in combat in the real world during the First World War. However, after Wolverine's soul was damaged following his resurrection and brainwashing by the Hand, he made a new deal with Azrael to repair the damage that had been done to his soul that negated their previous arrangement, with the result that, the next time Wolverine sustains death-inducing injuries, he will remain dead, and his healing factor has apparently been slightly weakened in the process.

In Ultimate Marvel though Wolverine was killed off by drowning him which means all you have to do to kill that version is keep him from getting oxygen to his blood and he can't regen, or phrased another way, Ultimate Wolverine can recover from anything so long as the cell can get oxygen to fuel the regen.