How did Newt graduate from Hogwarts if he got expelled?

JK Rowling revealed1 on twitter that Newt Scamander got expelled from Hogwarts.

J.K. Rowling
@JK_Rowling
Dumbledore was a young teacher at the time Newt was expelled. He wasn't able to revoke expulsions.
(Source)

Yet we know from Fantastic Beasts and Where to Find Them2 that Newt had graduated Hogwarts:

Upon graduation from Hogwarts School of Witchcraft and Wizardry, Mr. Scamander joined the Ministry of Magic in the Department for the Regulation and Control of Magical Creatures.
(Fantastic Beasts and Where to Find Them - About the Author)

There really should be no way to miss that fact considering how J.K. Rowling's lawyer has said (under oath) that this is a small book.

For example, the evidence will show that there are 274 entries in the Lexicon pulled from Ms. Rowling's 64-page Quidditch Through The Ages book. I'm holding it up, your Honor. It is not a very big book and they have 274 entries about it alone. Similarly, in her 63-page book, Fantastic Beasts and Where To Find Them, there are 222 Lexicon entries pulled from this book.
(Warner Bros. vs RDR Books, Day 1, Opening - Ms. Cendali)

How did Newt Scamander graduate from Hogwarts if he got expelled?

1 In as much that the movie isn't a reliable canon source.
2 The book, not the movie. (Nothing about this question concerns the movie.)

The tie-in book The Case of Beasts: Explore the Film Wizardry of Fantastic Beasts and Where to Find Them contains the following article which relates to Newt's supposed crimes.

A closer inspection reveals that Newt was indeed formally expelled, but that his expulsion was never "enforced" (whatever that means). This presumably includes allowing him to graduate and to keep his wand.

NOTES: Proposed expulsion from Hogwarts School of Witchcraft and Wizardry due to the illegal possession of a magical beast causing endangerment of human life and violation of animal welfare laws 101/304.

Punishment: Expulsion from Hogwarts School of Witchcraft and Wizardry.

The Ministry of Magic Animal Welfare Department were also informed of the violation and required to rehouse the magical creature. 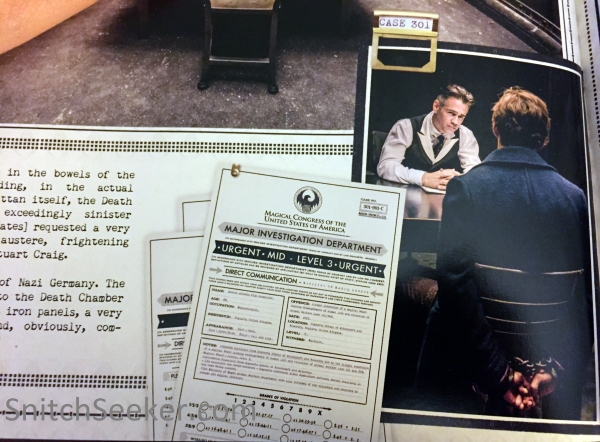 This is probably just a case of Rowling retconing a minor fact where she felt it would improve the story. It remains to be seen if the upcoming "expanded edition" of Fantastic Beasts will change that line.

Lots of these ideas were inspired by comments from Jonah, ThruGog, and Pwassonne. 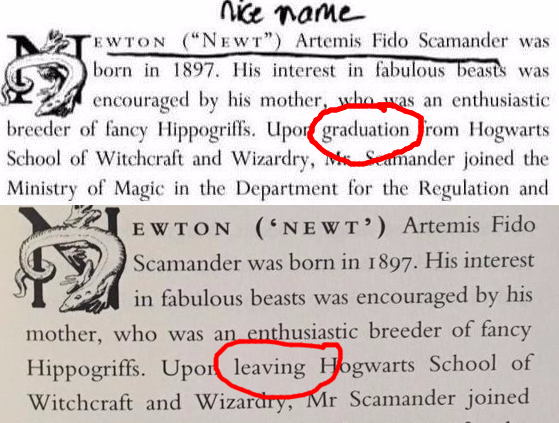 2001 Edition: Upon graduation from Hogwarts School of Witchcraft and Wizardry, Mr. Scamander joined the Ministry of Magic in the Department for the Regulation and Control of Magical Creatures.

2017 Edition: Upon leaving Hogwarts School of Witchcraft and Wizardry, Mr. Scamander joined the Ministry of Magic in the Department for the Regulation and Control of Magical Creatures.

There's nothing to say you can't go back. Hermione went back after going to hunt horcruxes with Harry.

JKR: Harry and Ron didn't go back. Hermione did.

JKR: Did you bet right? I mean, come on, nobody's going to think Hermione wouldn't go back.

Furthermore, Hagrid was expelled and became a teacher.

And we all know rules can change, like how Harry got a broomstick and became the youngest seeker in a century.

"That's a broomstick," he said, throwing it back to Harry with a mixture of jealousy and spite on his face. "You'll be in for it this time, Potter, first years aren't allowed them."
- Philosopher's Stone

Anything is possible in Hogwarts, especially under Dumbledores rule because we know he just didn't care and yolo'd everything xD

Not the answer you're looking for? Browse other questions tagged harry-potter hogwarts jk-rowling continuity fantastic-beasts or ask your own question.

38
In canon, has anyone other than Hagrid been expelled?
13
How famous was Dumbledore before 1945?
10
What does it take to be expelled from Hogwarts?