Do Starfleet personnel ever salute each other?

The organisation of Starfleet is somewhere between military and civilian: Captain Picard and Gene Roddenberry both describe it as being non-military, but in some ways it has a very militarised structure, with military-looking uniforms and ranks, a strictly stratified command structure, and so on.

This is one of the main ways Star Trek differs from its fellow cult sci-fi TV show Doctor Who. In the latter, the main character is strongly against soldiers and any sort of military organisation. One of the most common ways he expresses his dislike is in not wanting people to salute him.

So when I started watching Star Trek, having heard about its much more militarised nature as opposed to Doctor Who, I was expecting a lot of saluting between the Starfleet officers. But so far (12 episodes into TNG) I haven't seen a single salute. Is this always going to be the case?

Do Starfleet crewmembers and officers ever salute each other?

Starfleet personnel don't salute each other, even on formal occasions.

Although Starfleet can be characterised as maintaining certain military traditions (ranks, standing to attention, chain of command) they don't hold with all that silly saluting. Gene Roddenberry in his "writer's bible' made that abundantly clear to scriptwriters and for the most part, this view has held sway throughout the various shows.

In practice this means that our armaments and militarism have been de-emphasized over the previous series and very much de-emphasized over the movies. We will not see saluting. We may hear the word "sir", but it is extended as the same kind of courtesy used by junior and senior officers on civilian airliners.

That being said, there are some (very few) instances where we do see some saluting. When it occurs, it's invariably intended ironically or when captains are showing respect to alien cultures. 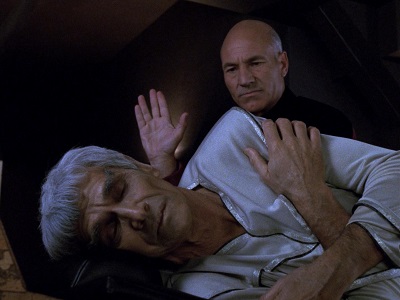 Interestingly, the various movie scripts do refer to personnel saluting each other (and the Federation flag) but in each case, this has been replaced by the person either standing to attention or simply having the scene cut entirely. I think we can put this down to writing error that was picked up during production.

Infrequently. Despite what most people think about the military, as an former military member, we don't actually spend a whole lot of time saluting each other.

In boot camp, we are trained and conditioned to salute anything that moves. The expression was: "Recruit, if it moves, salute it. If it doesn't, paint it." This structural adherence was to socialize the recruit into understanding their place in the overall social structure of the military. You are always subordinate to SOMEONE.

However, once you leave Boot, you find there is less and less saluting. Meeting new officers under specified conditions, morning reveille (only if you are outside in the public with a nearby flag) a new command, meeting for the first time, disciplinary hearings, there is an opening salute to the interaction, usually the obligatory: "Reporting for duty" or "reporting as ordered," or some such and then that's it.

Only the most strict commanding officers will insist on everyone saluting every time they meet.

Star Trek has taken that same structure and for the most part, people obey a particular discipline. In the regimented moments, passing in review, new command, funerals, the crew is at attention, hands at sides, heads up. Federation members rarely slouch, even when they are just hanging out. Personal pride and professional appearance are very much a Starfleet thing. They know HOW to salute, they just rarely, if ever do it in day to day life, especially aboard ship. As a member of the Navy, I can assure you, if you had to salute every time you passed a senior officer on a ship, you would take twice as long to get anywhere or get anything done.

They have obviously had the same kind of drilling we have on Earth, the same kind of discipline but with an understanding such salutes are either unnecessary, don't provide anything significant or undesirable.

The Federation may teach salutes for alien cultures, however, as an act of diplomacy or historical reference. Alien cultures however, may not have achieved that kind of understanding or may find salutes, particularly in militaristic cultures an acknowledgement of their rank or allegiance.

As an aside, military units on field ops rarely salute anyone. Saluting has the habit of indicating who is in charge of an operation. Since everyone is expected to know everyone else, there is no need for saluting. Proper respect is paid with "sir" and everyone keeps it moving. During live military operations, a salute can give away a commanding officer who might be promptly shot by a sniper (or perhaps in today's military, drone bombed) removing vital intelligence from the theater of war.

Somewhere on my large shelf of books is one from approximately the time of The Motion Picture which has a lot of cast and writer interviews about the show. It includes a section where Gene Roddenberry is explaining that the culture of Starfleet sees all individuals as social equals, even if they are of different ranks in the command structure. As such, salutes are never required. Nor is standing when an officer enters the room, or any other such military traditions. Which is not to say that it's forbidden, just that it's a personal choice on the part of the performer, not a requirement.

I honestly can't think of all that many places in any of the series or movies where any kind of salute is offered. The ones that do occur tend to be either ironic, or a sign of deep, personal respect. There are a few places where young, eager-to-please officers jump to their feet, but it's very much a culture where such things are optional and most people opt not to.

In the U.S. services of naval tradition (USMC, Navy, Coast Guard) you do not (except for very specific circumstances) salute indoors or while actively in the field, and never without a cover (hat) on.

The nature of Star Trek means that 99.9% of the time they will be indoors or in the field (since when traveling about space in a spaceship you'd either be in the spaceship or actively in the field on a planet). Not to mention the dress of the typical uniforms they wear does not have a cover anyway (probably due to the fact that on a ship you are always indoors, and naval services do not wear covers indoors...so covers probably just stopped being normal at all for most crew).

So even if Starfleet protocol were supposed to be highly based on U.S. naval service tradition you still might not ever see much saluting on the show. And given that information it seems reasonable to assume that saluting has probably fallen into nearly solely a ceremonial/historical role in the Starfleet universe.

41
Is Starfleet a military or civilian organization?

41
Is Starfleet a military or civilian organization?
4
Can Starfleet personnel be fired?
4
What's the junior officers' uniform variant Memory Alpha mentions?
13
What creature or object is represented during the time travel sequence in Star Trek IV: The Voyage Home?
3
Is there any official correspondence between Starfleet and Bajoran Militia ranks?
24
Why was conn held by low-ranking officers?
10
What universities provide a path to a Starfleet commission?
6
Does Starfleet still rate personnel on ESP?
30
How do ordinary citizens get around the Federation?