Was this scene in VOY: 'Alliances' the inspiration for a similar scene in 'Star Trek Into Darkness'?

WARNING: Spoilers for both Voyager 'Alliances' and Star Trek Into Darkness

In VOY 'Alliances', we see a scene where Janeway and a bunch of Kazon leaders meet together and are then attacked by a Trabe flying vehicle: 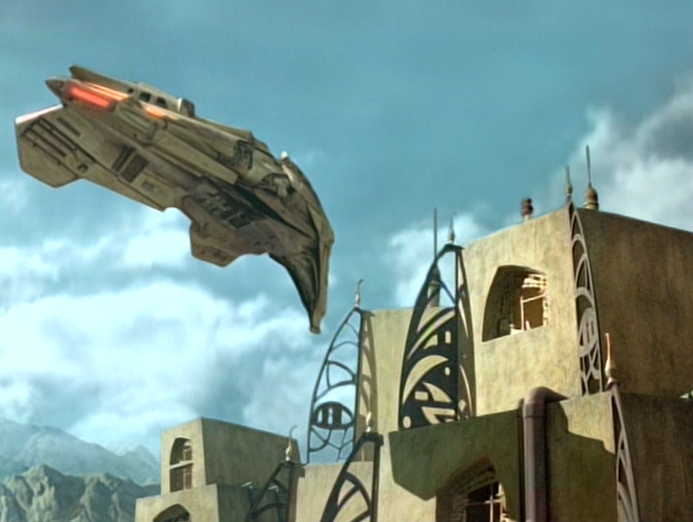 In Star Trek Into Darkness, we see the following scene:

I think anyone would agree there is quite a significant similarity between the two. My question is: Did this scene from VOY 'Alliances' at least partly inspire the other scene in Star Trek Into Darkness?

First of all, there is no explicit public comment by any of the Into Darkness staff that connects this scene to Voyager.

More generally, director J.J. Abrams has said on a number of occasions that he is categorically not a Star Trek fan (although I'm sure he is a fan of his own work), and so his prior knowledge of scenes such as this would be limited. On the other hand, writers Bob Orci and Alex Kurtzman are Star Trek fans, but of The Original Series almost exclusively. In particular, they have not commented about any inspiration from the later series. Finally, none of the production staff for Into Darkness overlap with Voyager's staff.

It is hard to prove a negative, but combining all of this with the fact that Abramsverse Star Trek has distanced itself from Rick Berman-era Star Trek, and given that Paramount has seen Voyager and Enterprise as the nails in the coffin of that era, I suspect that any similarity with that Voyager scene is pure coincidence.

Not the answer you're looking for? Browse other questions tagged star-trek star-trek-voyager star-trek-into-darkness or ask your own question.