Why does the Kryptonian space ship that is capable of genetic engineering fail to distinguish a kryptonian from a human?

In movies, the Superman's ship is shown to be very highly technologically advanced. In the latest Batman Vs Superman movie, it is shown to be capable of genetic re-engineering. Also, It is shown to have information regarding many galaxies etc. Why does a ship like that use very simple authentication techniques like 'S' logo pendant , 'fingerprints' etc ?

The prequel comic for Man of Steel informs us that the Kryptonian Scout Ship (the one at the crash site in Batman V Superman: Dawn of Justice) was originally an exploration and terraforming vessel piloted by Captain Kara-El and her crew. Unbeknownst to her, a criminal known as Dev-Em had stowed away on board and took over by compromising the ship's internal system while the crew were in hypersleep. Apparently even at that point a hand-print was all that was required to give access to "everything".

Over the next decade it seems likely that if there were any other security features in place (biometric or otherwise), that Dev-em systematically stripped them out, leaving the ship entirely vulnerable to Luthor's ruse, 20,000 years later. 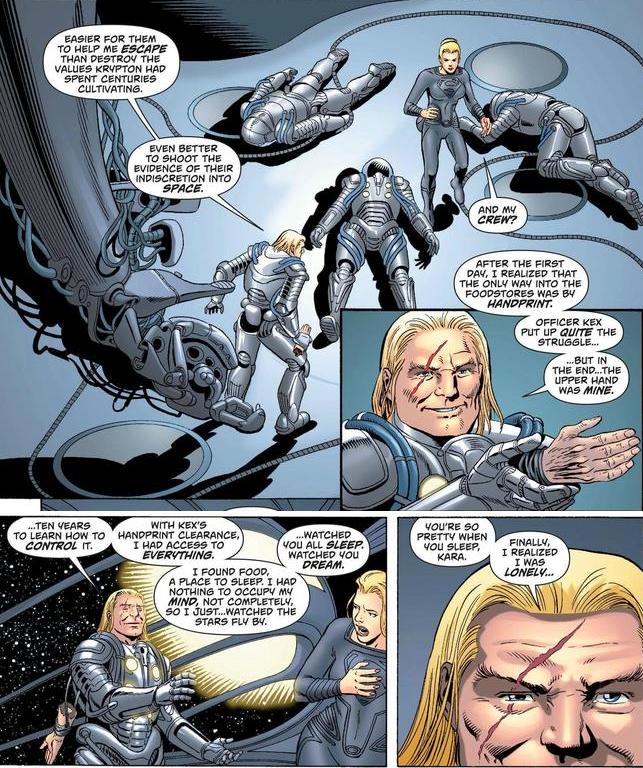 The fact that "Zod" is able to add another administration-level user simply by asking the computer to do so implies that the ship's security has been utterly compromised in a way that was never intended.

Note also that the ship's AI is capable of being reasoned with. That in itself is a massive security fail...

Ship: It has been decreed by the Council of Krypton that none will ever again give life to a deformity so hateful to sighted memory. The desecration without name.

Lex: And where is the Council of Krypton?

15
Why has Superman allowed humans to control the Kryptonian ship, Zod's body, and the World Engine wreckage?
14
Why did the Kryptonian colonies fail?
6
When Superman bleeds, does that mean he is killing the Kryptonian race?
17
Does the catchphrase "Why so serious?" come from a previous Batman property?
4
Why does All Star Superman have the space shuttle Columbia in the Fortress of Solitude?