Does marriage exist in the Star Wars universe?

Has anyone ever been definitively married in Star Wars? Luke's adoptive parents certainly seemed like husband and wife, but did they ever actually refer to each other as such? Having now watched The Force Awakens several times, I can say there is no mention of a past or current marriage between the parents of Kylo Ren. Is there any evidence that marriage exists in that galaxy, far, far away?

I have heard mention of things called prequels. I don't know of those, but, if it's canon, I'll buy it.

While answers to earlier questions also answer this question, the answers that have already been posted to this question answer it far more completely. It's not a duplicate; if I hadn't seen the prequels (I haven't), I wouldn't know to look for Anakin and Padme.

Anakin and Padme were married. Their wedding occurred in Episode II: 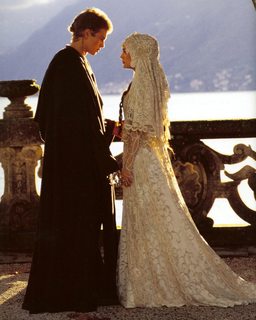 Cliegg Lars took Anakin's mother Shmi as his wife after he freed her from slavery (in Episode II):

Shmi is my wife...Come on inside. We have a lot to talk about.

Bail Organa mentioned his wife when he took Leia as a child in Episode III:

My wife and I will take the girl. We've always talked of adopting a baby girl. She will be loved with us.

From @Richard's answer to another question, Han and Leia were married according to the official novelization:

Left alone again, husband and wife also embraced. Han murmured over her shoulder, “I saw him. He was here.”

I can't find a direct confirmation that Luke's adoptive parents Owen and Beru were married, but the archived profile on Owen Lars from starwars.com mentions that

Owen dated Beru Whitesun when he was a young man. The two soon married, and worked hard together to eke out a living in the deserts of Tatooine.

For example, the wedding of Anakin and Padme.

Additionally, from Attack of the Clones:

CLIEGG (continuing) Cliegg Lars. Shmi is my wife... Come on inside. We have a lot to talk about.

And The Force Awakens:

She sees Han and is stunned. A silent beat, husband and wife reunited for the first time in years. In the smoke and embers, no one says a word.

Here are some other canon marriages.

I don't care if they know we're married.

Also, let us not forget in Star Wars: A New Hope, Luke's uncle and aunt could most likely have been married before being murdered.

This excerpt is taking from Wikipedia:

Link can be found here:

22
Are Han and Leia still married?
8
Who were the witnesses at the marriage of Padmé Amidala and Anakin Skywalker?