Have Vader's eyebrows been retconned?

In Rebels Season Two's finale, Twilight of the Apprentice, it was revealed that Vader has eyebrows, which are missing in RotS & RotJ.

In the old days of the Holocron system, G-canon would override T-canon as in the aforementioned instance. In the present Disney system, however, I'm unconvinced the same approach applies. Further elaboration in the spoiler tag below because it's slightly off-topic, but it explains how I arrived at that belief. You can skip the elaboration if you want.

The override approach allowed tolerance of any contradiction introduced, which is extremely confusing and unfriendly to newcomers to the universe. At one point, George Lucas decided to abandon his prior vision of Star Wars and overwrite it with a new vision. That was how the second, still-canon Clone Wars came into being. This was eventually formalised in Disney's official canon revamp. The new system worked on creating a singular, consistent world with content planned for commercial release decades into the future. That implies no override, and as such "all content are created equal". However, these material in George's and subsequently Disney's new vision have significant differences from even the movies before this vision change by George. One notable disconnect I felt when rewatching RotS recently is that the encounter between Grievous, Obi-Wan & Anakin feels too strongly like a first encounter as opposed to a meeting between familiar foes. Vader's eyebrows is just another difference. If we continue with the movie-over-TV approach to determining canonicity, most if not all Grievous-Kenobi-Skywalker scenes would have to be non-canon for the scene in RotS to make sense, so much so that the Clone Wars can hardly be worth calling.

As explained in the elaboration, I find it difficult to accept that the movies can still be considered to override everything else, such as TV shows, even if they are all Disney canon. My current headcanon, therefore, is that instead of "movies are more canon than television", it's now "the more recent work is canon". I can't prove this to be true, however, but it seems to be the more appropriate policy that doesn't contradict with what Disney retained as canon imo.

Considering that Rebels (which is canon) is produced more recently than RotS & RotJ (which are also canon), can we say that Vader's eyebrows are retconned into existence?

Interestingly, Vader's eyebrows have apparently been a bone of contention at LucasFilm for decades. They were originally present in the theatrical release of RotJ

but were then digitally removed for the 2004 DVD release, presumably to line up with the injuries that we then saw in RotS 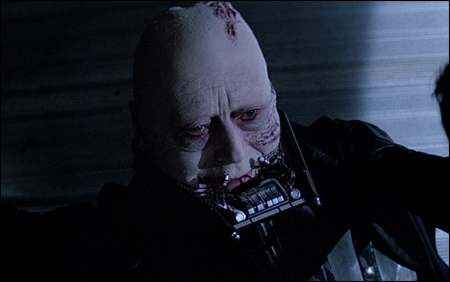 Since his eyebrows are present in Star Wars: Rebels but missing in Return of the Jedi (both of which are fully Disney canon), we can presume that they're not entirely missing and that he probably just removes them because they aren't as comfortable in his new helmet, bearing in mind that we just saw Ahsoka breaking the original one.

Lucasfilm's Pablo Hidalgo weighed in on this discussion with a series of tweets. Suffice to say, his responses are as helpful as ever.

"To grow back eyebrows is a power only one has achieved. But if we work together I know we can discover the secret." - Darth Sidious

According to the doctrine of Darth Bane, Vader's eyebrows follow the rule of two. #CANON.

Not the answer you're looking for? Browse other questions tagged star-wars darth-vader star-wars-rebels or ask your own question.

2
Did Darth Vader post-ROTS ever engage in sexual activity in canon?
12
Did Disney officially call Legends/EU material "Not canon"?
6
Is the content from the X-wing miniatures game canon?
37
What Star Wars Legends (EU) content has successfully become a part of Disney canon?
3
Is the 501st Legion accorded any special status or purpose in Disney's canon?
19
In canon, has a Jedi ever used the light side to kill a Sith?
15
Is the Mandalorian War canonical again?
11
What were Darth Vader's day-to-day tasks/duties?