A cartoon/anime with a blonde-haired boy with blue eyes and his father(?), they're looking for 7 gems/diamonds

I'm not sure if it's an anime, or just an anime-styled cartoon. The main character seems to be somewhere around 14 y.o. He had short, curly blonde hair and blue eyes.
In the first episode, he receives a map from his father(?) that has 7 gems/diamonds marked on it, and he has to find them.
I think his uncle comes with him, and then they're in a forest. i think they got biten by,...something,and they couldn't move.But then a dark green-haired girl in a dark red dress with darker skin comes and helpes them.
She later joins they're quest, aaaaand that's about it.
Also, later on, i remember they become friends with a big yellow bird that helps them. They also end up in some sort of desert before they meet that bird.

I believe this is Deltora Quest 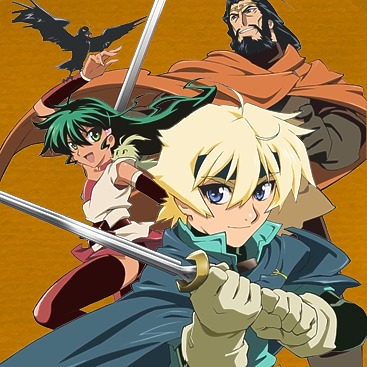 The evil Shadow Lord has taken control of the kingdom of Deltora and has driven the land and its people into misfortune and suffering. Lief, the son of a blacksmith, has just turned sixteen and is entrusted, along with his two companions Bard and Jasmine, with an important mission: to retrieve the stolen seven magical stones that once reunited within the Belt of Deltora, will bring power to the true heir of Deltora and give him the power to free the kingdom from the tyranny of the Shadow Lord. There is just one problem; the seven stones have been scattered all across Deltora and currently reside in the hands of seven wicked men who are not easily willing to give them up.

The series is an anime adaptation of a fantasy novel series written by Emily Rodda (real name Jennifer June Rowe) who is an Australian as such this isn't your traditional "Japanese Light Novel turned Anime". i am unsure if the books were ever translated into Japanese but on Jennifer's Wikia Page in regards to the Anime Adaptions she said she

chose this option because she and her kids "love" Japanese anime and because she wanted any adaptation of Deltora to be "cool".

The main character seems to be somewhere around 14 y.o. He had short, curly blonde hair and blue eyes.

As you can see in the image Lief matches this description

In the first episode, he receives a map from his father(?) that has 7 gems/diamonds marked on it, and he has to find them.

the first episode if i recall correctly goes though how the Shadow Lord took over the Kingdom of Deltora then it fast forwards to the present day where Lief is asked by his blacksmith father to locate the stones that belong on the Belt of Deltora which were separated during the Shadow Lord's invasion. Lief's father has repaired the belt that the locations of each stone is guarded by a servant of the Shadow Lord

I think his uncle comes with him, and then they're in a forest. i think they got biten by,...something,and they couldn't move.But then a dark green-haired girl in a dark red dress with darker skin comes and helpes them.

this happens i think in the second episode. Lief and Barda go to a forest where the first gem is located and they are attacked by creatures which paralyze them. while paralyzed Jasmine finds them and initially steals their belongings until later she has a vision of her mother saying she should help them on their quest where she then saves them, leads them the stone and it's guardian and continues to travel with them

i belive this is Prim

Prim is a Kin who were driven from their home by gnomes who started using poisoned arrows, the poison coming from one of the Gem Guardians. bellow is an image of other Kin. 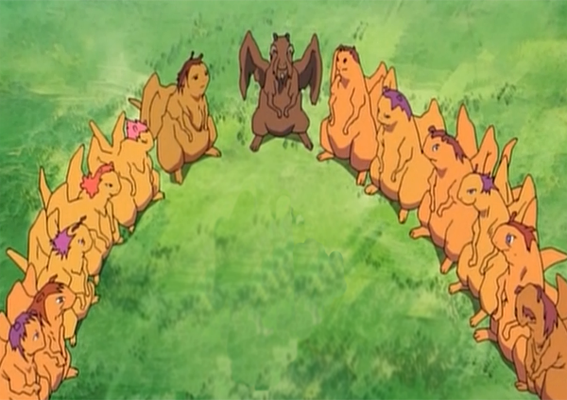 They also end up in some sort of desert before they meet that bird.

before meeting Prim the trio did go to the Shifting Sands where one of the Gem's were located. after getting this Gem their next gem they go to get is on Dread Mountain which is where the Kin used to live before the Gnomes drove them off

I think his uncle comes with him

as i said the Kin i am thinking of aren't birds, at least i don't believe so. they aren't described to be birds, just intelligent flying creatures

4
Girl traveling to space with her uncle and aliens they meet on the way (novel and animation)
1
Cartoon/anime where a girl turns to stone and the boy has a "hoverboard" and travels around with her body
6
Anime with male protagonist who conceals his red eyes
7
Trying to identify a high fantasy movie on the SyFy channel, two women accidentally bewitch men?
7
Anime show featuring a blue boy with arm cannon
4
90s/2000s anime/cartoon with a boy, a girl, and a robot looking for seven gems to prevent the planet from blowing up
4
Anime/cartoon: Tony and his 2 companions find the gems that fit into the legendary book
5
Medieval cartoon with blonde prince wearing blue, searching for 7 magical gems with a knight
3
Cartoon/anime where thunder hits a robot and the boy hero can then control it to fight evil with
3
Old anime with isekai and gems / crystals