This is another one of those books that I remember from my childhood that I just can't place. I read it as a paperback book, probably from Scholastic, somewhere in the late 1980s to the early 1990s, in English. A family moves to a new house. I don't remember the circumstances. There were either one or two kids, but one was a girl. She starts to see strange things out of the corner of her eye, including the ghost of a small boy. She tries to track down who he might be, and discovers that a boy of that description and his father disappeared from the house some years ago.

Ultimately, she comes to realize that the boy's father was a thief of some sort, and that the item stolen was a set of rare stamps, which I think turn out to be inside a picture frame. There's a scene near the end where they're trying to recover the frame while in the middle of a storm, with part of the danger being that the father is also a ghost, and may be able to cause actual harm. But, of course, they do find the stamps, which I think lays both ghosts to rest.

The cover showed the ghost boy, I think in a blue outfit and translucent, in front of a swingset with the protagonist girl also in the foreground. I believe that the boy was reaching up to her with a sad expression on his face. I'm pretty sure that the boy was blond, and was not wearing a hat.

I think that I found this one at least once before a few years ago, but I'm having no luck remembering what the title was.

Found it. As is typical, my memory was very fallible, but the keywords led me to the right work. Christina's Ghost

After Grandma gets sick, Christina must spend lonely days with her grumpy Uncle Ralph in a spooky, isolated Victorian mansion, but things change when she meets the ghost of a little boy, who may be linked to a thirty-year-old murder. 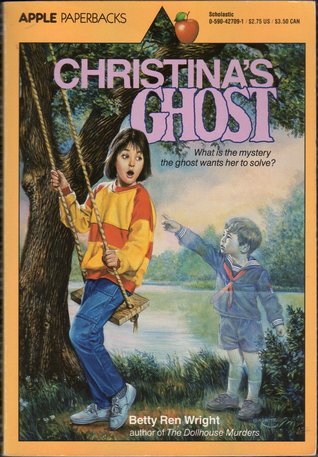 Wikipedia has a more spoiler-laden summary:

The book centers on 10-year-old tomboy Christina who, to her displeasure, has to spend her summer with her grumpy uncle after her grandmother becomes ill. Uncle Ralph is house sitting for a friend in an old, spooky, and isolated lake-side Victorian mansion. Once she gets there she finds a room that looks as if it had once belonged to a little boy. There she sees, for the first time, a little boy in a blue sailor suit, who disappears before Christina can talk to him. She also finds out that whatever she does, she cannot get inside the attic even though she hears noises coming from there. Christina decides she wants to know why the little boy is there. On a trip to the nearby city, Christina looks for old newspapers to see if she can find any information about the house. She finds a newspaper dated 30 years ago. It says that a murder took place in the house after a man stole some valuable stamps. The men whom he stole from found out where he was staying and went to kill him. The little boy was killed simply because he had witnessed the murder. One of the murderers confessed and said that they never found the stamps. When Christina gets back she finds the stamps inside an old comic book that she had taken from the boy's room. Suddenly she hears something descending from the attic. Once again she sees the boy, but this time his expression is of terror, pointing at the attic door where the ghost of his sitter is about to come out. Christina and her uncle flee the house as the ghost of the sitter causes chaos. They manage to escape and spend the night in a nearby town. They turn the stamps in to the local sheriff's office the next morning. When they arrive back at the house, that morning, they find the doors and windows all open from the previous night. Upon further investigating, Christina concludes the ghost of the little boy is finally at peace now that the mystery surrounding his untimely death has been solved.

So basically, I got wrong the reason why she was there, what the killer's relationship was to the boy, and where the stamps were hidden... but I did remember the cover art!

Not the answer you're looking for? Browse other questions tagged story-identification young-adult ghost or ask your own question.

6
YA Series about alive boy sent to ghost fantasy world by ghost to prevent him from being killed
5
Looking for short horror story about graveyard and family of ghouls
6
TV series about a boy and a ghost girl who was abused?
9
The rich playboy is dead, and he's a ghost, but his wife still loves him
8
Book about a teenage boy who helps ghosts stop a poltergeist and they help him win at football
13
A novel or novelette length ghost story, "You can't trick me the same way twice"
3
Romance/Supernatural book about a girl who falls in love with a male ghost after moving into her grandmothers house
7
Book where a girl lives on a farm and plays with a ghost boy only she can see
4
Book about a pair of girls who help a ghostly girl in a locked room move on