I know that area really narrows it down by a lot, since barely anything happens in NYC, but this was a black and white book. It involves the search for some item (I think it was a subway token?) and it needed to be given to some evil spirits. I know one of the villains of the book was a man who worked a lot with neon lights.

City of Light, City of Dark 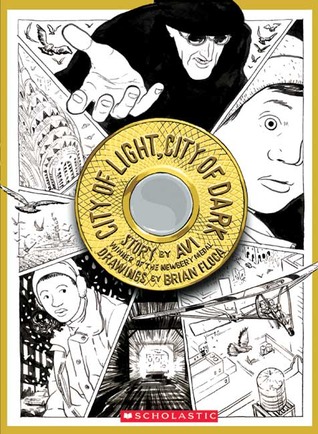 Two kids fight to save their city from eternal winter in this gripping fantasy by Newbery Medalist Avi, illustrated by three-time Sibert honouree Brian Floca.

The Kurbs give people light and warmth to establish a city, on one condition: The people must return the Power every year or risk losing the city — forever. This system works for centuries until evil Mr. Underton tries to steal the Power. If he succeeds, the Kurbs will take back the City, reducing it to a dark and frozen tundra. It's up to Carlos and Sarah to find the Power — housed in a subway token — and keep the City safe, despite secrets of Sarah's history that are entwined with the token. What ensues is a race against darkness. A race against the lies of the past. And most of all, a race against time

8
Sci fi book about knights with swords and armor and “arc” weapons
5
Comic - woman in dystopian world
6
Can anyone help identify a book about a group of outsider teens sucked into another universe?
46
A futuristic book I am sure was titled “Grandfather Bank”
20
Future Archeology in New York City
7
Old story about New York City having become “Black New York”
11
Graphic novel involving xenoforming of Earth by a malicious intelligence