Which of the Warhammer 40k races have allied with one another most often?

I know that permanent alliances in the WH40k universe are impossible, all races are too prejudiced, too proud, or just too mindless to achieve such an alliance. In the grim, dark future of the 41st Millenium there is only war.

However, there are situations where members of two (or more) races have to work together for a common goal. While they inevitably split and/or betray each other, they, for a time, fight together, plan together, and have to place limited trust in one another.

Massive operations (entire armies/fleets working together) hold most value to this question, but even single individuals would count, and the longer an alliance lasted, the more valuable it is here.

And one condition: cases where members of one race ditch their original affiliation don't count, for example, humans leaving the Imperium to join the Tau wouldn't count here.

That might be a cheating answer to your question but what we call the Tau empire is actually made from many allied races, two of the most common ones are Tau and Kroot, the latter is also known to work as a mercenaries for anyone who is willing to pay, including Chaos.

If you ask about the information from the tabletop game, here is a helpful diagram: 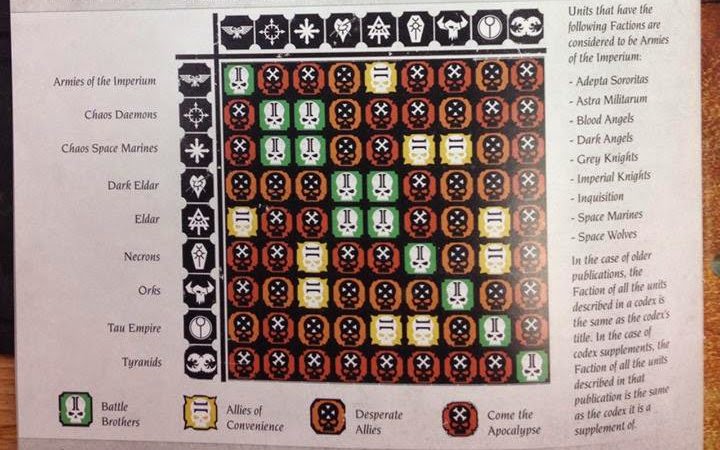 Which kinda agrees with what you can read in the books - eldars are the one that are most likely to give a hand to someone, usually for their own gain (especially the Harlequins, which are sort of masters of themselves focused on fighting Slaanesh) and are known to cooperate with almost everyone (except for Chaos, Necrons and obviously Tyranids).

Second place (or maybe even first?) would go to...Orks, especially the Freebooterz, that are happy to deal with almost anyone for the loot and the fun of Waaaagh (and contrary to the picture above, they have been working with humans as well).

The Necrons formed temporary alliances a few times when it benefits them, note though they did not need to do this in order to win they did it so as not to waste their own ships/resources.

Word of the Silent King by LJ Goulding

The Silent King had met Sanguinius, the primarch of the Blood Angels, and had great respect for him; he believed a true alliance between the Necrons and Imperium could have been formed if Sanguinius had not fallen. Its unknown if the Silent King would have helped another chapter of space marines.

Perhaps, had he not fallen to illogical and prideful infighting, their Sanguinis-Angel might have steered them towards a more enlightened destiny. Certainly, he would have made a more amenable emperor than a preserved witch-corpse. If ever there were a human to be mourned, noble Szarekh would say it was him. That alliance - the first alliance, perhaps?

There is another example of the Necrons helping the Tau against the Tyranids but this could not really be called an alliance. The Tyranids attacked a Tau world which was a tomb world. The Necrons woke up, killed the Tyranids and left the Tau alone. After the battle, when the Tau went to thank them, the Necrons flayed them and killed everything left on the planet.

I'm having trouble locating the exact stories but Eldar and Space Marine fight side by side when a greater threat arises.

Space Marines in general have a lot of respect for the Eldar warriors but betrayal is a common theme when any alliance is formed.