Why do the 12th Doctor's clothes change between series?

After reading a question about why each Doctor changes out of the previous one's clothes, it made me think that in series 8 the Doctor had a set outfit like all the rest: a shirt without tie (nice touch I think, especially when you know Matt Smith removed his bow tie and he is decided to not take one up), pants and jacket with silk inside a different colour so it shows when he puts his hand in his pocket.

Then you come to series 9 and it changes to checkered pants that look like Hartnell's, with a hoody and jacket or t-shirt and then towards the finales he goes back to the same style but with a velvet jacket (which Clara mentions in the finale, saying how she likes it). Is that his clothes set now as homage to Clara, or will we see the scruffy t-shirt and hoody again? And has anyone seen found a reason as to why he dressed scruffy - was there a reason why he changed clothes?

The Doctor's personality has changed between Series 8 and Series 9.

Quoting from my own review of Series 9 on this site's blog:

Peter Capaldi has now really settled into his role as the Doctor, bringing some of his own flair to the show and ensuring his place in the annals of Whovian history. In Series 8 he had to spend too much time acting grumpy and proving that he wasn’t Matt Smith, but now he’s been able to spread his wings, let his hair down a bit, and establish himself as (in my view) the best speech-making Doctor in all of New Who.

The strict, no-nonsense, dour, often grumpy Doctor of Series 8 - playing up these aspects of his personality in an attempt, perhaps both in and out of universe, to distance himself from his previous regeneration - was replaced by the more laid-back and even 'cool' Doctor of Series 9, with his greater propensity for hugging. This change has been reflected in the way he dresses himself, as you've described, and also in his hairstyle: 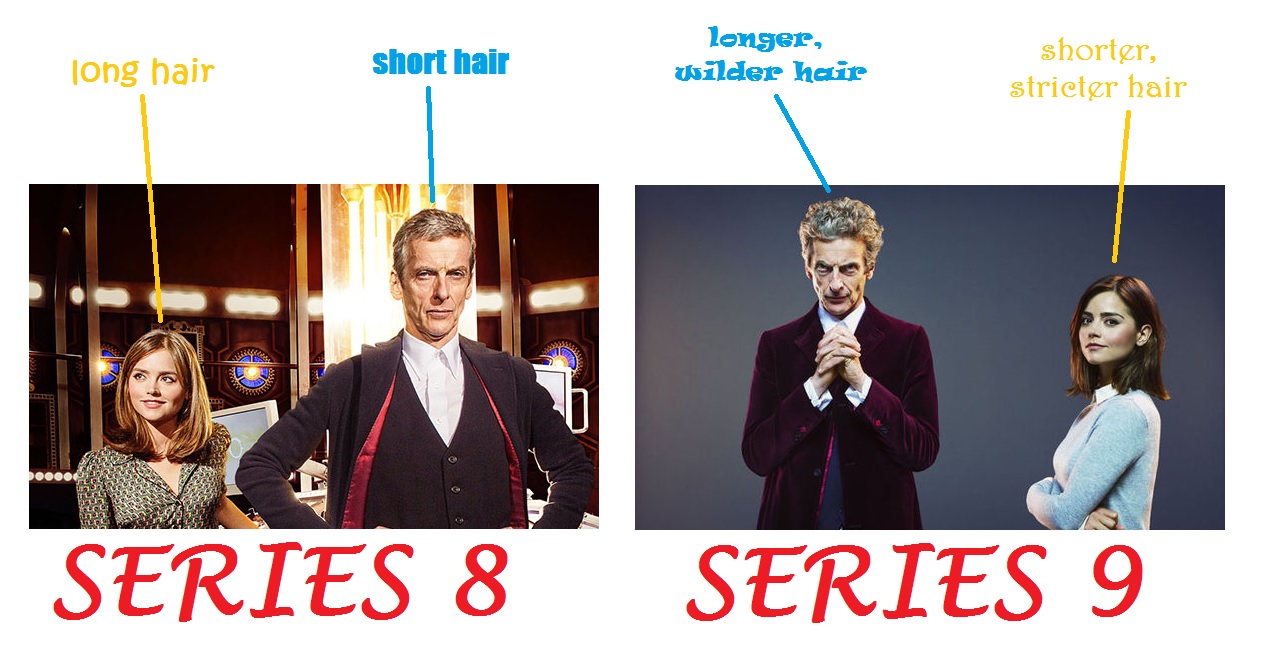 As for whether this will change again in Series 10 or whether he'll keep on wearing the velvet jacket that Clara liked, the only answer is wait and see. We've no idea at this stage what's going to happen in Series 10, including how the Doctor may or may not change.

The clothes reflect how the Doctor is changing throughout his run. For example, after the Christmas episode of season 8 this article states that the Doctor is lightening up a bit:

Steven Moffat has revealed that the Peter Capaldi's Doctor will return to season nine much different than he was in season eight. “We’re not bringing him back exactly the same as we left him, at all. I think that was already evident at Christmas,” he explained. “He’s left some of the burden of being the superhero of the universe behind.”

So considering he's not going to be showing off himself as a hero he may have felt that he didn't have to bother too much about whether or not he looked good.

The Doctor's initial outfit, chosen within the narrative of "The Eleventh Hour" from an array of clothes found in a hospital, is a brown tweed jacket with elbow patches, bow tie, suspenders, black trousers and black, ankle-high boots. He has a fondness for bow ties and fezzes, proclaiming them as "cool."

The details of the outfit vary, switching from a braces and bow tie combination in red to the same in blue. In later stories, a green military coat makes its way into the Doctor's ensemble, occasionally replacing the Harris jacket.

On other occasions he does not wear a coat and wears a bow-tie and dress shirt. After the Doctor loses his original tweed jacket in the episode "Flesh and Stone" he replaces it with a plain brown jacket which he wears until the Christmas special "A Christmas Carol", which aired the Christmas after the eleventh Doctor's first series. In this episode the Doctor wears his most famous "Prince of Wales check" tweed jacket which he wears, with some switching to a green military coat, until parting ways with Amy and Rory in "The Angels Take Manhattan".

As to the red coat, Wikipedia says:

In "Face the Raven", the Twelfth Doctor sports a red velvet variant of his Crombie coat. After briefly ditching it in "Hell Bent", Clara comments that it made him look more 'doctory'. At the end of the episode, he dons the red coat in honour of her, and is given a new sonic screwdriver by the TARDIS.

So depending on how he remembers Clara in season 10, he may keep it as a reminder (although he hasn't done this with the other Companions as far as I know - and you'd think that because he was so attached to Rose at the start he would have kept something).

Of course it could be something of a midlife crisis as this article suggests.

The simplest answer, the clothes make the man. A very essential part of the Doctor's regeneration is establishing the fact that along with a new face there is a new personality, the new clothes help to reinforce this change.

9
What is the inspiration for 11th Doctor clothing style?
1
What was the point in the Silence trying to kill the Doctor when Clara saves him anyway?
18
Why was the Doctor's memory wiped?
6
Why didn't Clara say the Doctor's name?
1
Why doesn't the 12th Doctor die?