Elvish transcription - Upon the Hearth the Fire is Red

Does anyone know if this transcription is correct? It's a portion of Upon the Hearth the Fire is Red.

Home is behind, the world ahead,
And there are many paths to tread
Through shadows to the edge of night,
Until the stars are all alight. 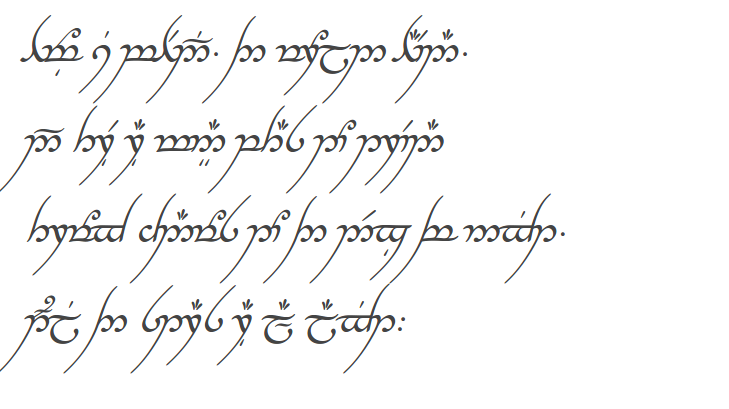 As far as elvish goes, the transcription is incorrect. Rather, your idea that this is elvish is incorrect. What you have there is the same text in English language using the Tengwar alphabet. The alphabet can be used with English, but it doesn't make it "elvish". I think the English version is okay, though. But if you want real elvish, carry on reading.

Translating that is not a trivial task at all. First of all, there are more than one "elvish" language. Prof. Tolkien created many languages, of which there are two usable elven languages called Quenya and Sindarin. Quenya is more like an elven latin whereas Sindarin is more like a lingua franca amonsgt elves and Numenoreans (Aragorn's people).

And even these have different flavours. There is an "Old Sindarin" and a third age version. There are some examples of Sindarin in the books and several in the films. Galadriel's farewell is one of the rare examples of Quenya, yet Quenya is more complete than Sindarin. That's because originally Quenya was supposed to be the lingua franca, but Tolkien changed his mind while writing The Lord of the Rings.

So, I'm assuming you want to translate into Sindarin, in a fashion any Numenorean or elf in the third age would be able to understand.

If you are trying to achieve a "canon" type of translation, that's virtually impossible. Prof. Tolkien never finished designing the language and left many gaps behind. There is, however, an effort to reverse engineer the language and fill the gaps. The thing is: Quenya and Sindarin share a common root and Quenya can be deconstructed to be re-arranged as Sindarin. This is what we call Neo-Sindarin, and this is what linguists like David Salo are known by. Most elven speech you listen to in the films is Salo's reconstructed Sindarin, so this is the place to start.

Now, I can try and show what is behind translating your text. Yet I am no linguist, so I may have made some mistakes, so don't go tattooing this anywhere. Sindarin is a very complicated language, it is full of mutations and odd verbal issues. But let's try to do something.

There are many words for night, many variants of "to walk". "To walk" could use gerund "baded". Gerund can be used in place of participle sometimes, and the "to be" can be negleted. Composite words can be created. Perhaps "edge of night" can become a single word? I haven't tried. As you can see, a lot of mistakes can be made.

You might be able to recognise some words like "amar" (world). Galadriel speaks that in the film: "i amar prestar aen" = "the world is changed/affected". That's actually the very first thing you hear.

Now to the alphabet. Tengwar is a phonetic alphabet. There are two ways Sindarin is often reproduced in tengwar, I will give you both. The first one is the standard mode and is probably the one an Elf would prefer in The Lord of the Rings. It uses symbols similar to accents (åáàãâ) to represent vowels. There are no examples in the books, except from earlier sketches.

The second way is the Beleriand mode. This mode uses whole characters for vowels. In the standard mode, some characters are left unused because the sounds they represent don't exist in Sindarin. With the Beleriand mode that issue is minimised. This is the one used in the western doors of Moria and is how the Sindar elves used to write their language. Celeborn is supposed to be a Sindar.

You can learn more here:

Phrases used in the films:

Not the answer you're looking for? Browse other questions tagged tolkiens-legendarium quotes tolkien-languages or ask your own question.

70
Elvish tattoo - can it be translated into English?

12
Sailing West from Middle Earth as a Human
18
When Eru reshaped Arda, did he also change the cosmos?
5
What does the Elvish word "Ai!" mean?
8
How can Tolkien's characters see stars during the daytime?
11
Why does Frodo see the eye of Sauron in Galadriel's mirror?
16
How long can elves go without sleeping?
6
What would be the translation of "non-elf" in Elvish?
11
Dragons on Middle-earth: How did they reproduce?
14
Was Gandalf astray, or had the land changed, on the road to Moria?