Did Dumbledore unnecessarily hinder the life-chances of students by cancelling all exams in Chamber of Secrets?

I know I'm not the only person to think of this (in part due to this Tumblr post) but why did Dumbledore/McGonagall cancel all the exams at the end of Chamber of Secrets? 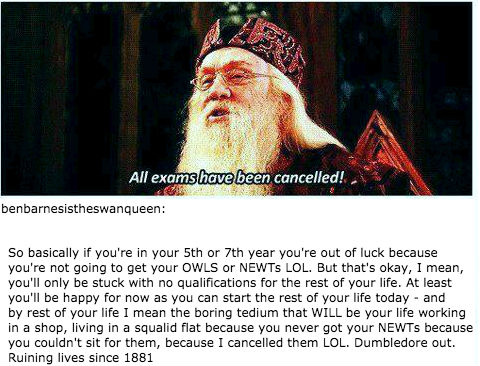 So basically if you're in your 5th or 7th year you're out of luck because you're not going to get your OWLS or NEWTs LOL. But that's okay, I mean, you'll only be stuck with no qualifications for the rest of your life. At least you'll be happy for now as you can start the rest of your life today - and by rest of your life I mean the boring tedium that WILL be your life working in a shop, living in a squalid flat because you never got your NEWTs because you couldn't sit for them, because I cancelled them LOL. Dumbledore out. Ruining lives since 1881

I can see why it fits in the ending of a children's novel. Rowling needs to get to a happy ending pronto so she's all like: Lockhart is gone forever, Hagrid's released, the petrified people are OK, Gryffindor wins the House Cup, exams are cancelled, huzzah! For the lower year students not having to do exams is a treat (though obviously not for someone as studious as Hermione!) as it circumvents hours of boring revision.

However, for the older students, exams are the means of getting a foothold in the adult world by gaining OWLs and NEWTs. Cancelling the exams seems cruel to those people, especially in the light of this quotation:

Ten minutes into the class, Professor McGonagall told them that their exams would start on the first of June, one week from today.

There was a loud bang behind Harry as Neville Longbottom's wand slipped, vanishing one of the legs on his desk. Professor McGonagall restored it with a wave of her own wand and turned, frowning, to Seamus. "The whole point of keeping the school open at this time is for you to receive your education," she said sternly.

"The exams will therefore take place as usual, and I trust you are all revising hard...Professor Dumbledore's instructions were to keep the school running as normally as possible," she said. "And that, I need hardly point out, means finding out how much you have learned this year."

If holding the exams was still important when people were at risk of life and limb before the Chamber is closed then why cancel them when that threat is no longer there?

Moreover, how did a generation of Hogwarts graduates survive in the wizarding world with no formal qualifications?

Most probably Dumbledore just cancelled the "regular" exams done internally in the school at the end of the year.

For OWL and NEWT - Hogwarts only hosts them. The exam content comes from the Ministry and the examiners are from the Wizarding Examinations Authority.

Harry Potter and the Order of the Phoenix, chapter 31

'Of course, it's not what you know,' he was heard to tell Crabbe and Goyle loudly outside Potions a few days before the exams were to start, 'it's who you know. Now, Father's been friendly with the head of the Wizarding Examinations Authority for years - old Griselda Marchbanks - we've had her round for dinner and everthing . . .'

Harry's Charms practical exam done in front of Professor Tofty (Harry Potter and the Order of the Phoenix, chapter 31):

'Professor Tofty is free, Potter,' squeaked Professor Flitwick, who was standing just inside the door. He pointed Harry towards what looked like the very oldest and baldest examiner who was sitting behind a small table in a far corner, a short distance from Professor Marchbanks, who was halfway through testing Draco Malfoy.

'Potter, is it?' said Professor Tofty, consulting his notes and peering over his pince-nez at Harry as he approached. 'The famous Potter?'

Out of the corner of his eye, Harry distinctly saw Malfoy throw a scathing look over at him; the wine-glass Malfoy had been levitating fell to the floor and smashed. Harry could not suppress a grin; Professor Tofty smiled back at him encouragingly.

That's it,' he said in his quavery old voice, 'no need to be nervous. Now, if I could ask you to take this egg cup and make it do some cartwheels for me.'

For the regular exams it is the teachers who define the tasks/questions AND do the scoring.

For the OWL exams the teachers only know what they should teach the students. Several times teachers mention that "most probably" this and this would be part of the OWL exam. Still they don't know what exactly.

Harry Potter and the Order of the Phoenix, chapter 12 - Snape gives the task for the day:

'Today we will be mixing a potion that often comes up at Ordinary Wizarding Level: the Draught of Peace, a potion to calm anxiety and soothe agitation. Be warned: if you are too heavy-handed with the ingredients you will put the drinker into a heavy and sometimes irreversible sleep, so you will need to pay close attention to what you are doing.'

Harry Potter and the Order of the Phoenix, chapter 13:

They then spent over an hour revising Summoning Charms, which according to Professor Flitwick were bound to come up in their OWL, and he rounded off the lesson by setting them their largest ever amount of Charms homework.

Also OWL exams are done in front of an external commission. The teachers only facilitate the procedure.

So most probably OWL and NEWT exams were done if not on schedule, then a bit later during the year.

Whether Dumbledore was irresponsible is more of an opinion-based question. I can, however, guess as to why the exams were canceled.

First, it is possible that they had make-up exams

It is possible that the exams were indeed cancelled for that school year, but that there were makeups, either in the summer or the at beginning of the next year.

But more likely, N.E.W.T.s and O.W.L.s were not cancelled.

McGonagall only said that exams were cancelled. I suspect that this category does not include the out-of-school examinations, which are in a category of their own (and probably Ministry-mandated).

Cancelling the yearly exams would do very little harm, since apparently everyone passes, even Crabbe and Goyle. Well, everyone except Marcus Flint.

Not the answer you're looking for? Browse other questions tagged harry-potter hogwarts albus-dumbledore or ask your own question.

11
How did Colin Creevey pass his tests?

17
How does Professor Binns read books or grade student's papers?
10
Why didn't Ron and Harry ask Professor McGonagall for help instead of Lockhart to enter the Chamber of Secrets?
25
Why are Hogwarts students threatened with expulsion so much?
29
Did Dumbledore and McGonagall cheat so the Gryffindors would win the House and Quidditch Cups?
4
Does Dumbledore know from the start that Voldemort is the one attacking the students in the Chamber of Secrets?
11
In Book 6, why were Dumbledore's and Snape's combined efforts in making Malfoy reveal his murder plans so feeble?
48
Why didn't Gryffindor already have a Quidditch Seeker before Harry's appointment?
14
What favor did Moody owe Dumbledore?
18
Why didn't Hogwarts shut down after these type of events?
9
What was the original version of this post on JK Rowling's website?