Few years ago I saw movie about a special forces team, that was send to wild planet through teleport for searching the missing team. In the end it turned out that their goal - to find a wonder drug for an evil corp and bring it to Earth. This drug (some kind of water I think) was found in the cave of prehistoric bear. In the end of the movie was scene where evil corp. presents new cure with name similar to Vita Nova.

It's possible that the name of the drug found in the movie title.

This is probably Savage Planet 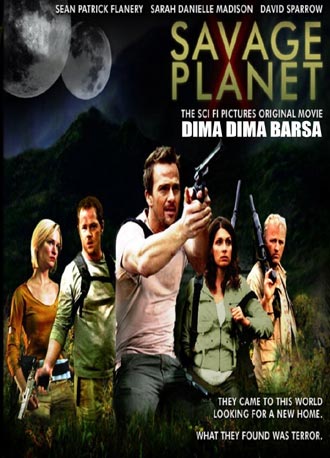 The synopsis from Wikipedia says it all:

In the year 2068, Earth can no longer sustain human life with its natural resources depleted beyond repair. Whereas other companies are seeking to colonize the Moon, Calron sets its aim much higher: the planet Oxygen whose potential could save billions of lives. However, since it is 20,000 light-years away, a technology known as DST (or deep-space teleporting) has to be used to get there. A team, led by Cain (played by Sean Patrick Flanery), arrives but soon discover that it is home to a terror in the form of voracious, enormous, prehistoric bears and the planet itself is in an unstable condition. The team soon tries to escape from the planet, but are confronted by many ordeals. By the time the movie is over, the only two left alive is Allison Carlson (played by Reagan Pasternak) and Cain (played by Sean Patrick Flanery), who manage to teleport back to Earth.

From the IMDB reviews page:

The plot has something to do with getting air from a planet, but I couldn't really follow it because the movie has SPACE BEARS. Isn't Sci Fi supposed to be about delving the depths of your mind to create new creatures who have never seen the light of day, truly exorcising [sic] your imagination. And when I think Sci Fi, the first thing that pops into my mind is SPACE BEARS. For about 3 days after I saw this movie I went around shouting SPACE BEARS. Yeah, its that bad.

I suspect these are the prehistoric bears mentioned in the question.

There is also a well, not of water, but of green slime that can cure anything:

Anyway, as the number of humans drops to an all time low they suspect one of them has double-crossed the rest. He discovered a well of green slime in a cave that cures all disease and even regenerates lost limbs! The traitor then tries to make it back to Earth to get rich off this stuff, and leave his buddies behind on the "Savage Planet" to become bear food.

Not the answer you're looking for? Browse other questions tagged story-identification movie teleportation or ask your own question.