This has been nagging at me for quite some time:

Where are the cannons that are seen firing above the cockpit of the Millennium Falcon?

Their use can be distinctly seen approximately 40 seconds after dropping out of hyperspace near what was Alderaan. A lone patrolling TIE fighter overtakes them and Han throws a quick switch in the ceiling, firing as the fighter zooms past.

I just rewatched the scene mentioned above, just to confirm I'm not imagining things. Then I went and looked at various shots of the Millennium Falcon, models and in the movies.

Just to be safe, I allowed that it might actually have been the TIE that took a quick pot-shot, but to me it's definitely Han shooting first (har har!)

There's nothing I can identify as looking like cannons above the cockpit.

The film's official novelisation indicates that the flash you see was a strike (by the TIE fighter) on the Falcon's deflector shields:

“A survivor, maybe—someone who might know what happened,” Luke ventured hopefully.
Ben Kenobi’s next words shattered more than that hope. “That’s an Imperial fighter.”
Chewbacca suddenly gave an angry bark. A huge flower of destruction blossomed outside the port, battering the freighter violently. A tiny, double-winged ball raced past the cockpit port.

and from the junior novel

As if in response to Ben’s words, a huge explosion burst outside the cockpit window, then an Imperial TIE fighter streaked past the Falcon. The Twin Ion Engine ship was immediately recognizable by its two hexagonal solar array wings on either side of a small, spherical command pod.

You can actually see the explosion from the rear view in the Manga adaptation (BAM! BOOM!) 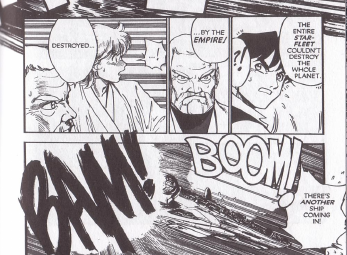 And from the top-down view in the 2015 comic adaptation A New Hope: The Special Edition (WHANG!) 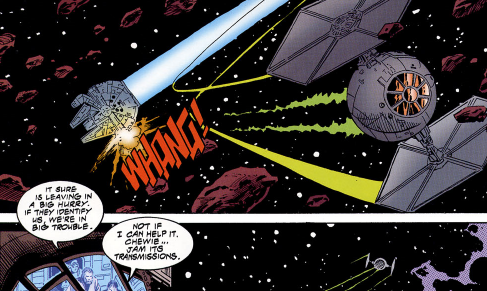 There are a few reasons to believe it was actually the TIE fighter shooting at the Millennium Falcon, and not the Falcon firing those shots.

All this leads us to believe that it was actually the TIE fighter shooting at the Millennium Falcon, and not the Falcon firing those shots.

18
Did the Empire know the Falcon was going to Alderaan?