What is the name of this movie I saw on tv many years ago?

I recall many years ago watching a vampire type movie. It seemed to be a low budget film, but I know that at least one of the actors I had seen before. Unfortunately I cant give you a name. The two main things about this one was that they had landed on this planet as I guess a sort of exploration. I missed the first part of the film and did not get the title.

When they were on the planet they realized after a while that there was some sort of life form there which was killing or infecting the members of the crew so they would become vampires.

So they finally made a lift-off from the planet, but no one could be certain that one of the crew was not now infected and would make it back to their home and infect the place with these vampires. It turned out that it was the captain and a person who you were led to believe was not infected. There was a machine on the space ship which allowed them to pass through asteriod belts etc and deflect the asteriods or other objects so they could make it back. They also had light speed etc. During the course of things they all got infected, but the last two (a couple of course) had survived and were determined they would not allow the ship to get back to their home. This had been assumed by me and intentionally by the movie plot that the home planet was earth. So they defeated the others and wrecked the machine so no one could get back.

At the last scene they had been circling around the solar system of a nearby sun which they could manage to reach and they picked out a planet they could land on and live out their lives. In the view port you finally see a view of earth from space, so it is obvious they had not come from earth but were about to infect this planet with vampires. I thought that part of it was well done. I recognized some of the actors but could never figure out the names of them and have never been able to find this movie again. I would sure like to view it again if possible. So anyone with a clue as to what the name of the movie is, send me an email.

This is likely Planet of the Vampires, a 1965 Italian/Spanish science fiction horror film. It starred Barry Sullivan and Norma Bengell. Barry is more likely the one you would have recognized, being more famous. 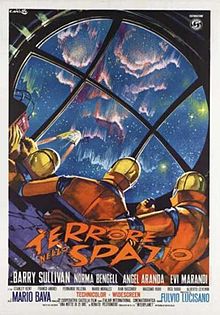 The story follows the horrific experiences of the crew members of two giant spaceships that have crash landed on a forbidding, unexplored planet. The disembodied inhabitants of the world possess the bodies of the crew who died during the crash, and use the animated corpses to stalk and kill the remaining survivors.

Markary and his crew rush to the Galliott to retrieve the Meteor Rejector. They are successful, and manage to place explosives in the ship. During a struggle with the Aurans, Dr. Karan (Fernando Villeña) and Tiona are killed. Markary and Sanya return to the Argos and manage to escape as the Galliott is destroyed. After takeoff, however, they reveal themselves to be possessed by Aurans. They ask Wes, the last survivor, to join them. Wes refuses and tries to sabotage the Meteor Rejector, but fatally electrocutes himself while doing so. Because the device has been broken beyond repair, Markary and Sanya decide to change course for a nearby planet...Earth.

It's not difficult to find the full movie on YouTube, but a trailer is more likely to not be taken down:

Not the answer you're looking for? Browse other questions tagged story-identification spaceship vampire or ask your own question.

6
Name this children's sci fi show from my childhood
4
Why did this person die in The Vampire Diaries?
2
1950s short story: alien ship and vampires
5
Short story from many years ago: the ancient, brilliant, cruel race was Earthlings
13
What vampire movie is this?
14
What is the name of this scifi movie with an AI robot on another planet gone rogue
3
1980s Vampire Movie Name
13
What TV show or movie did I watch on TV years ago where diseased people are exiled to a spaceship?
10
First work in which vampirism was cured