Was Harry ever attracted to anyone other than Ginny or Cho?

We know that Harry has crushes upon both Ginny and Cho at various points in the books. However, is there any canon evidence of him showing any form of attraction whatsoever to anyone else at any point?

On several occasions, Harry describes Madame Rosmerta, the landlady at the Three Broomsticks as being "pretty" as well as noting her curvaceousness

It was extremely crowded, noisy, warm and smoky. A curvy sort of woman with a pretty face was serving a bunch of rowdy warlocks up at the bar. -

Madam Rosmerta, the pretty landlady, didn’t seem to think much of this; she was looking askance at Moody as she collected glasses from tables around them

‘Nothing,’ said Ron, hastily looking away from the bar, but Harry knew he was trying to catch the eye of the curvy and attractive barmaid, Madam Rosmerta, for whom he had long nursed a soft spot.

He also noted that Parvati was not unattractive

The common room looked strange, full of people wearing different colours instead of the usual mass of black. Parvati was waiting for Harry at the foot of the stairs. She looked very pretty indeed, in robes of shocking pink, with her long dark plait braided with gold, and gold bracelets glimmering at her wrists. Harry was relieved to see that she wasn’t giggling.

and nor was her identical twin Padma

‘Hi,’ said Padma, who was looking just as pretty as Parvati in robes of bright turquoise. She didn’t look too enthusiastic about having Ron as a partner, though; her dark eyes lingered on the frayed neck and sleeves of his dress robes as she looked him up and down.

He also managed to finally notice that Hermione was kinda attractive, in the right light, with her hair done up.

The oak front doors opened, and everyone turned to look as the Durmstrang students entered with Professor Karkaroff. Krum was at the front of the party, accompanied by a pretty girl in blue robes Harry didn’t know

Harry was physically/magically attracted towards the Veela.

Veela were women ... the most beautiful women Harry had ever seen ... except that they weren’t – they couldn’t be – human. The Veela had started to dance, and Harry’s mind had gone completely and blissfully blank. All that mattered in the world was that he kept watching the Veela, because if they stopped dancing, terrible things would happen ...

A young woman was standing in the doorway, a woman of such breathtaking beauty that the room seemed to have become strangely airless. She was tall and willowy with long blonde hair and appeared to emanate a faint, silvery glow. To complete this vision of perfection, she was carrying a heavily laden breakfast tray...

And he blushed when kissed by her in The Goblet of Fire (although to be fair it was in public by a girl he hardly knew).

Fleur bent down, kissed Harry twice on each cheek (he felt his face burn and wouldn’t have been surprised if steam was coming out of his ears again),

In the "movies" he finds this waitress attractive: 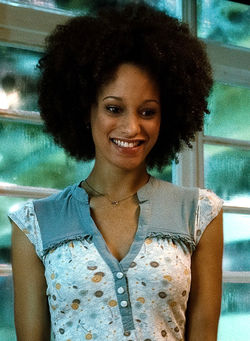 When Hermione warned Harry that Romilda Vane had crush on Harry, he enjoyed that.

This can be counted as attraction.

The 2001 edition of Fantastic Beasts and Where to Find Them included a note from Ron teasing that Harry was in love with Moaning Myrtle. It would be just that, but however we also see that Harry tried crossing it out. According to standard playground rules, crossing out a note only indicates that it's true. 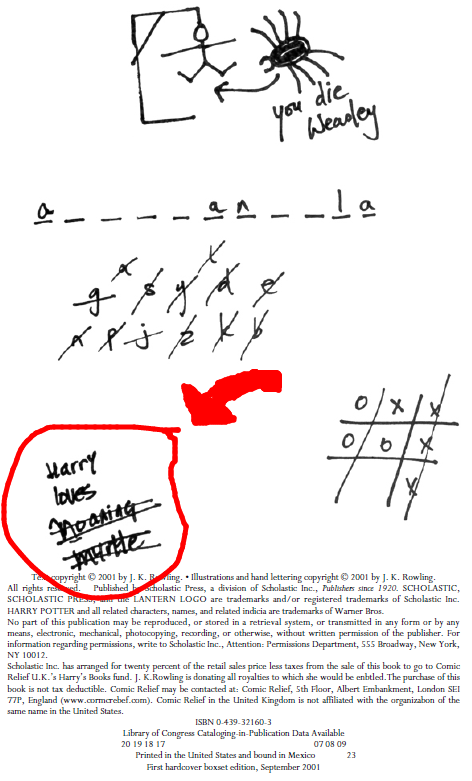 It should be noted that, like all of Harry's and Ron's annotations, this no longer appears in the new 2017 edition of the book.

In Book 7, when Harry is in Luna Lovegood's room and he sees the artwork she made of him and his friends, Rowling writes that he "felt a great rush of affection for Luna" (DH, Chapter 7, p. 417 [American paperback edition]). This is a case of attraction based on emotion rather than physical attractiveness - and it could just be friendly affection, rather than a desire to date Luna, especially since Harry and Ginny are already an established couple at this point in the books.

Still, I think that one moment fits the bill for what this question was asking about. I have often wondered what might have happened between Harry and Luna if this scene had occurred earlier in the books - would it have sparked a romance? Alas, we can only speculate.

Edit to clarify in light of lengthy discussion in comments

This answer is based on two premises:

In addition to the characters mentioned in the other answers, there are a bunch of females whom Harry considers pretty throughout the last three books of the series:

Not the answer you're looking for? Browse other questions tagged harry-potter love or ask your own question.

29
How does the new edition of the Fantastic Beasts book differ from the old one?

19
Did Harry ever tell anyone else about Snape's memories?
1
What were the other injuries to Weasley family members?
18
Where do Harry and Ginny live after the events of the books?
38
In canon, has anyone other than Hagrid been expelled?
11
Was it ever definitely confirmed that it was Ginny who sent Harry his Valentine's Day song?
17
How many times has Dumbledore outright lied to Harry (or anyone)?
8
In the poem she writes Harry, why does Ginny Weasley refer to Lord Voldemort as "The Dark Lord"?
15
Was Ginny really used as bait because she was Ron's sister?
3
Harry Potter fanfic where Ginny is determined to marry Harry who has no interest in her
20
When did J.K. Rowling decide to make Harry and Ginny a couple?