What is the spike on Klingon boots for?

Some Klingons wear boots with a spike near the toe, as seen in some episodes of Star Trek: The Next Generation. Is there an in-universe reason for this design? Is this for battle as an additional weapon, ritual, only style or maybe because of Klingon anatomy? 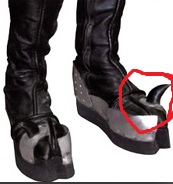 If you're Klingon and you're going to be kicking someone in the gut, you really want to make 'em bleed!

In TNG: Heart of Glory, the two Klingons are shown in the brig assembling a disruptor from parts strategically hidden in their uniforms. Some of those parts came out of those 'spurs'.

Star Trek 'Visual Effects Producer' Dan Curry drew the following sketch to demonstrate Klingon anatomy. You may wish to note that the bone spur on the Klingon foot lines up perfectly with the spur on the shoe, strongly suggesting that a Klingon's foot-talon fits neatly into the talon on the shoe. 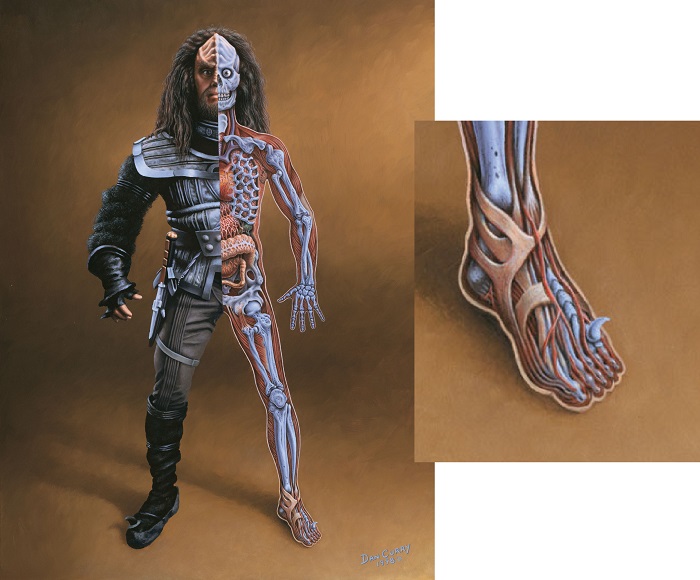 [about the appearance of early Klingons] Worf: We do not discuss it with outsiders... (Deep Space 9, season 5, episode 6 'Trials and Tribble-ations')

Perhaps the original Klingons did have the talon as part of their anatomy and it has simply been bred out of them (like how Klingons in more recent Star Treks look considerably different from their 'Original Series' counterparts).

Or it could have simply changed from a dominant, to a recessive gene, like blue eyes (a trait that is more rare, inherited only if both parents are carriers.)

So now it is worn to honor their history, AND as an added weapon, or as a hiding spot.

In a warrior culture such as theirs it makes sense for their appearance to be multipurpose in function. See Sihk Warrior Weaponry; a culture whose appearance is both spiritual and practical wearing their weapons upon their bodies, or hidden within their clothing for ease.

20
Do we ever see Klingon feet?
11
Why were these Klingons wearing platform shoes in Heart of Glory?

12
What is the significance of the different styles of, and emblems on, Klingon baldrics?
32
Why did the Klingon language flourish?
20
Are there in-universe explanations for how some species' appearances change between series?
22
Are Klingons obligate carnivores?
10
Why are the Klingons so friendly in The Undiscovered Country?
4
Are Klingon threats towards the Federation serious?
11
Why were these Klingons wearing platform shoes in Heart of Glory?
1
Why did some Klingon faces change while others did not?
54
Starship Enterprise: Always flying left-to-right?