I was looking over the MSPA Wiki and I noticed that Lil Hal had a human looking sprite that I had never seen before. 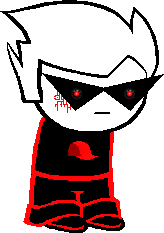 So, from my understanding, unless it had a preface that it isn't canon, what is on the wiki is canonically-backed. When is it that we see this form for him, because I never remember seeing it.

Lil' Hal's human appearance is taken from the flash [S] MSPA Reader: Mental Breakdown, when the MSPA Reader realizes the quote from Doc Scratch where he asks Rose to consider him one of her 'human uncles' has a more literal meaning as Lil' Hal is a clone of Dirk*, who in turn is the post-scratch version of Dave's Bro, who is Rose's genetic father. During this sequence, a human version of Lil' Hal appears.

* Lil' Hal becomes a part of ARquisprite, who is in turn a part of Lil' Cal, along with one half of Gamzee and Caliborn. Doc Scratch is created when Cal is combined with a magic cueball by the A2 Black Queen.

Not the answer you're looking for? Browse other questions tagged homestuck or ask your own question.

4
When is the not whole truth quote that Doc Scratch says?