Who is the green bearded painter unicorn in S6 E4 “On Your Marks”?

The recent episode S6 E4 “On Your Marks” of My Little Pony: Friendship is Magic has a short scene of a painting lesson in a studio. There are eight ponies in that scene. We (the fans of the show that is) know who seven of those ponies are, and I'm asking here who the eighth pony is.

First, let me list who the other seven ponies are. The first two are easy. One pony is the main character of this episode, the only one important for its story. The green mare with red mane in the center, who serves as the model, is Tree Hugger, the character who was featured in S5 E7.

Three of the ponies are expies for famous real world painters. Although their appearance also resembles that of the real world artist, we can identify them more certainly because each of them is shown with a painting that parodies the style of that real world artist.

Two other ponies are one-off characters who had spoken lines in S4 E12 during the Party Planner song, but have not or barely appeared since. 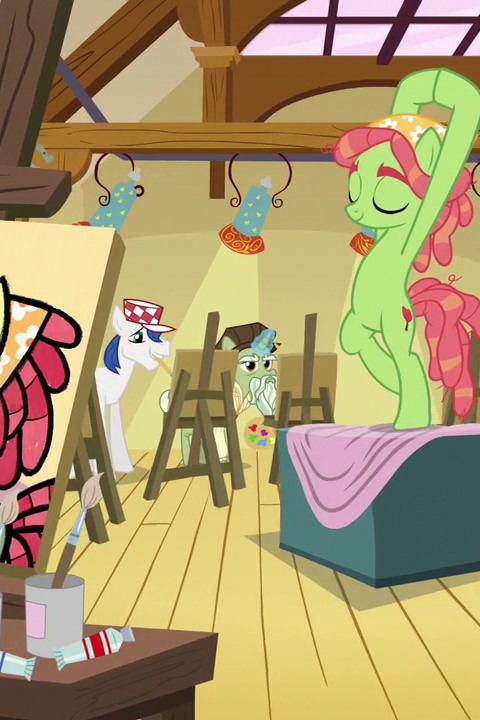 That leaves us with just one pony in the background in the above image. It is a green unicorn with big white beard and moustache, thick white eyebrows, white tail, yellow eyes, blue dweomer, wearing a pale bright yellow shirt and a black painter's hat. We only see it from far away in the background, partly covered, and never see its cutie mark or painting.

Since the other seven ponies refer to something, it seems likely that this eight one isn't an incidental background pony either. (Mind you, that's what I said in my last impossible to answer question as well, so you shouldn't trust me.) Who is he?

Please don't just give a name as the answer, give some evidence on what matches this green unicorn.

I dunno about FIM, but that's Leonardo da Vinci 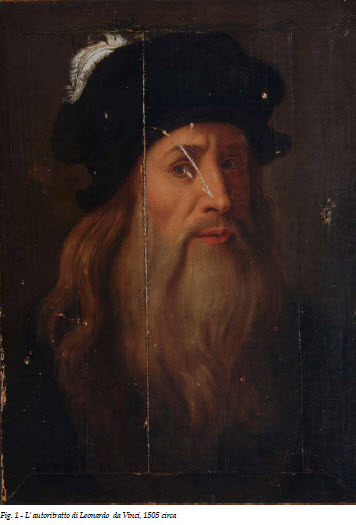 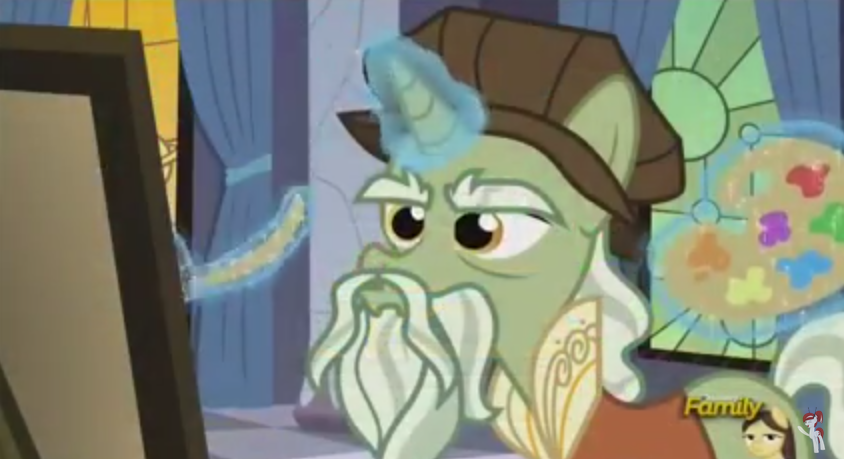 5
Who are the two yellow mares in the season 5 poster?

11
Why do the Cutie Mark Crusaders live with their sisters instead of their parents?
5
Who are the two yellow mares in the season 5 poster?
14
Do My Little Pony: Friendship is Magic ponies have coats?
5
Why did Starswirl the Bearded invent an 'amniomorphic spell'?
4
When was Starswirl the Bearded alive in relation to the events of the MLP: FIM TV show?
6
Do we know if mares outnumber the stallions in Ponyville?
2
Does the recognition by the Mane Six’s “Cutie Map” objectively prove the idea of equality as practiced by Starlight Shimmer in Ponyverse as being bad?