How did they create the prop of Han Solo in Carbonite?

Curious if there is anything out there that describes how they made the life size figure of Han in Carbonite.

Was it a full body cast, if so how did they get the clothes, or was it an artistic sculpture?

It was a cast (as was Mark Hamil's hand getting cut off). I haven't found any interviews but this tweet says it took 20 mins to make the face as shown 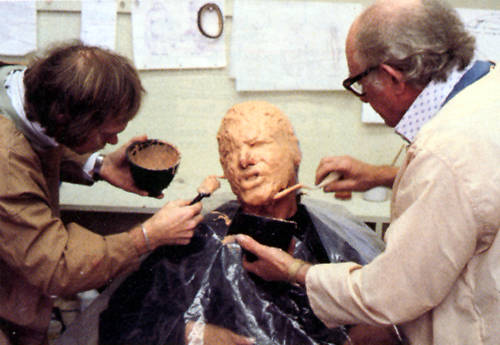 Fun fact: only Harrison's face was cast. They used a body double for the rest (was the same actor who played Bossk the bounty hunter).

Q: You were the body double for Han Solo in carbonite. How did this came to be?

A: Irvin Kershner had the idea. We were in the props room where they put a shroud over me and two drinking straws through my nose so I could breath. They later cut my face out and put Harrison Ford’s in. Irvin Kershner and I looked at the finished product on the set and Harrison came over. He said he was thinking of turning one of these into a coffee table. I don’t know if he ever did.