When was Superman's first use of heat-vision?

When Supes started out, all he could do was leap tall buildings (not fly), and while "nothing less than a bursting shell could pierce his skin", presumably a bursting shell could. There was no heat vision, no super-cold breath, no heightened senses at the very beginning. At some point between now and then (in the comics, one presumes), these powers were folded in.

When did we first see Superman use heat vision?

From the Fleisher's Great Superman Book: 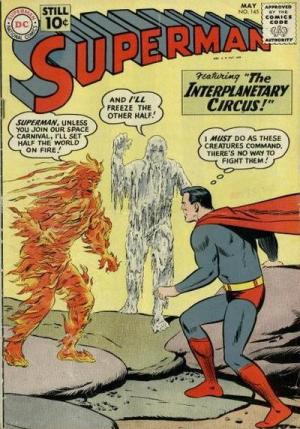 All of these instances are Pre-Crisis Superman and were still feats less powerful than the Silver Age or Bronze Age Superman, whose powers grew so great that he had almost no limits. This would be revisited after the Crisis on Infinite Earths, when the writers would redefine Superman's abilities. John Byrne would be the first major architect of change for Superman's powers.

After the Byrne Superman, his powers were scaled back and defined loosely as a collection of psychic abilities like pyrokinesis, and remote viewing. This did not last long and after the next Universe reboot, his powers went back to a scientific background (that no one explained the science of how they actually worked.)

Doing a little research, it looks like Superman's Heat Vision was introduced in the Silver age (1960's, 1970's). There apparently was no mention of heat vision in the Golden Age. Not a real good answer, but best I could find.

36
Has Superman ever used his heat vision to cook food?