Why was the image of Supreme Leader Snoke not “scaled to fit our primitive screens”?

Holograms are common in the Star Wars universe. The first, or at least the most memorable, being R2's projection of Princess Leia. 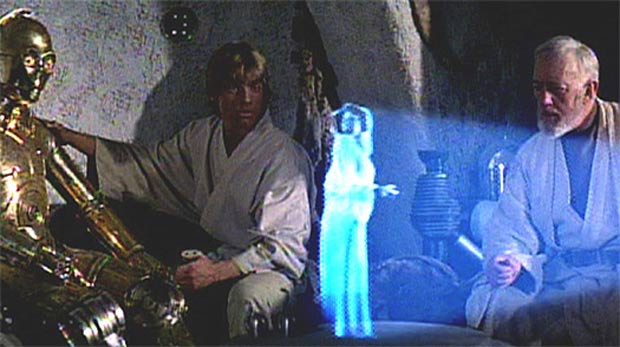 Note that this is a scaled version of Leia. Possibly because that took less memory to store, but importantly supporting that holograms can be easily scaled, even by a humble astromech droid.

Then we come to: 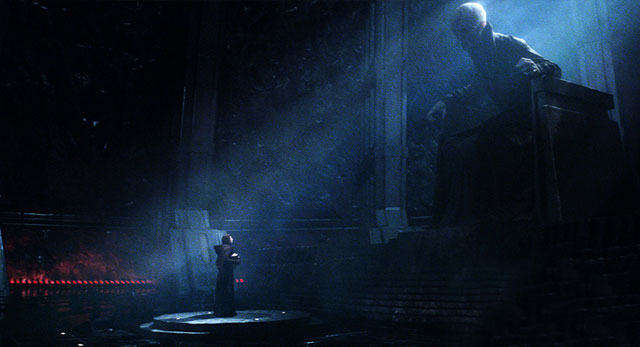 My neck hurts just thinking of a helmeted figure craning to look into the eye of that character.

Why did the viewers not scale the hologram to a convenient size?

(And boy, I sure hope the "I am your father!" shock reveal of this trilogy is not "I'm as tall as Yoda!")

I would say the answer is as simple as an intimidation factor...

From the primary canon, we see Emperor Palpatine use the same technique in The Empire Strikes Back. He wanted to project himself larger than life even though Darth Vader has known the Emperor for years.

A bit of EWAG speculation... the viewer does not have to control over the scale of the hologram. It is based on the size of the projector and/or the size the broadcaster wants.

Looking to the EU we have this scene from The Last Command (part of the Thrawn Trilogy). Emphasis is mine. Thanks to Aaganrmu for the quote

The pause symbol vanished before Thrawn could answer; but it wasn’t the standard quarter-size figure that replaced it. Instead, a huge image of C’baoth’s face suddenly glared out at them, jolting Pellaeon an involuntary step backwards.

To say the least, being the Emperor or Supreme Leader is going to have its advantages...

Don't forget, sometimes holograms are one-way recordings (as was Leia's) and sometimes they are two-way interactions (as with Snoke). In Leia's case, you can see she's looking down. Why? Because she was looking at R2. It would be both easy and convenient for Luke and Obi-Wan to view a small-scale, because it doesn't affect Leia one bit since it was a recording anyway.

When Kylo Ren is talking to Snoke, it's two-way. Not only is Ren looking up, but Snoke is looking down, suggesting that on Snoke's end, the hologram he sees of Ren is small. How odd would it be if both ends were small? You'd be looking down at a hologram, who was in turn looking down at you. Rather like having a video chat with someone whose camera isn't aligned with the screen they're looking at.

So... in order for two-way holograms to make sense, both ends have to agree on scaling, otherwise the participants wind up looking in odd locations. And if the Emperor or Supreme Leader wants to be a giant, who's going to argue?

Not the answer you're looking for? Browse other questions tagged star-wars the-force-awakens hologram or ask your own question.

11
Why did R2-D2 have the ability to record & project holograms?
7
Has Kylo Ren actually met Supreme Leader Snoke?
2
How do Star Wars hologram communications work?