Earth occupation/invasion book I read in the 90s

I remember a TON of details, but I can't for the life of me find the title of this book.

The story takes place during Earth's occupation by a race of red-skinned, black-eyed, three-fingered aliens, and involves an attack on the planet by other aliens that resemble Swiss army knives. That race's name starts with an H.

The protagonists are a young boy whose mother works for the chief of the occupying race and the chief's daughter.

It was a hardcover book. The cover featured both protagonists. The boy was in a blue shirt with a V neck, very 60s era Trek looking. The female protagonist was described as wearing a cloak and was possibly depicted that way on the cover. Her three-fingered hand was DEFINITELY depicted on the cover. And yes, the invading aliens were described as resembling army knives or multitools, but the exact term swiss army knife might not have been used. All of the occupying alien structures were described as open domes. The female protagonist mentioned that her ancient people lived on open plains ...while ancient humans lived in caves, and that's why modern humans lived in houses and this alien race preferred domes. This is a paraphrase of an exact exchange between the two protagonists (taken from comments. Ooops!)

I'm located in the US. I read this book in junior high between fall of 1996 to spring of 1997, but it was not a new book. If I had to guess, based on 20-year-old memories, it felt like, or I remember it looking like, it was published in the 70s. But I can't be certain.

The cover, on top of featuring both protagonists, may have also featured geometric shapes: cones, spheres, cubes. But I watched a LOT of UPN in those days.

Has anybody ever heard of this book?

The book you are looking for is "Under Alien Stars" by Pamela F. Service, published in 1990. Here is a link to its US Amazon page showing the cover, much as you remembered it.

The human boy is called Jason. The alien girl is called Aryl. Aryl's race who have occupied Earth are called Tsorians and the much worse alien race whose attempt at a second invasion is repulsed by Jason and Aryl's efforts are called Hykzoi. One of them is indeed described as being like "a huge, animated Swiss army knife. Its body was flat and elongated, and various-shaped appendages were moving in and out of slots in its side."

It ends on a cautiously happy note but has an absolutely terrifying opening sequence, given that it is a children's book.

Given that Under Alien Stars is potentially also the answer to this recent question I am adding some more detail to my answer of last year.

You said that the occupying aliens were red-skinned, black-eyed and three-fingered. In the first chapter the skins of the Tsorians are described as always being maroon, in contrast to the variety of human skin colours. Jason thinks of Aryl's eyes as being like black marbles or hamsters' eyes. They have three fingered hands with claws.

The protagonists are a young boy whose mother works for the chief of the occupying race and the chief's daughter.

Rogav, Aryl's father, is the military commander of the alien forces on Earth and a proponent of treating humans better. The civilian governor of the planet is called Oimog. She advocates harsh rule. Jason's mother Marylin works for Rogav, much to Jason's shame at first.

The female protagonist was described as wearing a cloak and was possibly depicted that way on the cover.

Aryl is shown in a cloak on the cover, and it is said that the colours of the linings of the cloaks Tsorians wear show their rank. Children are "bonded" or apprenticed to one parent and wear the same colour cloak.

The female protagonist mentioned that her ancient people lived on open plains ...while ancient humans lived in caves, and that's why modern humans lived in houses and this alien race preferred domes.

I'm pretty sure this is mentioned several times, so I'm sure you're right, but the conversation I've been able to turn up without re-reading the whole book is between Aryl's father Rogav and Jake's mother Marylin while she is showing him round her house. Marylin asks what Tsorian houses are like and Rogav answers, "We like open spaces, few angles and confining walls." She replies, "Then this place must feel like a cave to you."

Your memories of the cover were very accurate: it shows Aryl with long white hair and wearing a sweeping cloak, with her three-fingered hands raised in front of her. It also shows Jake wearing a shirt that, while not blue or V-necked, does have a neckline and general look incredibly like the Star Trek uniform from the pilot episode The Cage. There is an alien spaceship and a skyscraper, possibly also alien, in the background, forming geometric shapes.

This sounds like a book in the Xeelee series by Stephen Baxter, and particularly like Reality Dust: 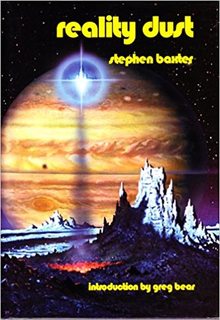 9
Book: alien planet with multiple alien species (underground rats, flying sharks...) at war with each other
6
What is the name of this book with a female character and aliens with six fingers?
6
Looking for a book about aliens on Earth for centuries with a hostile agenda
9
Book with male protagonist struggling against giant (possibly alien) bugs
8
Identify DC Comic Book With Alien Invasion/Occupation of Earth
8
70s science fiction book series with intelligent alien dinosaurs/dumb Earth dinosaurs
26
Sci-fi book about humanity barely winning a war with an alien race, after which the protagonist discovers some secrets about the conflict
4
Book: human-centric galaxy
4
YA sci-fi book where an empathic (or color changing) alien befriends a young girl