Where did Finrod Felagund first discover the Edain?

I know it was in Beleriand somewhere but I want to know the location of their first meeting.

From The Silmarillion (emphasis mine):

When three hundred years and more were gone since the Noldor came to Beleriand, in the days of the Long Peace, Finrod Felagund lord of Nargothrond journeyed east of Sirion and went hunting with Maglor and Maedhros, sons of Fëanor. But he wearied of the chase and passed on alone towards the mountains of Ered Lindon that he saw shining afar; and taking the Dwarf-road he crossed Gelion at the ford of Sarn Athrad, and taming south over the upper streams of Ascar, he came into the north of Ossiriand.

In a valley among the foothills of the mountains, below the springs of Thalos, he saw lights in the evening, and far off he heard the sound of song. At this he wondered much, for the Green-elves of that land lit no fires, nor did they sing by night At first he feared that a raid of Orcs had passed the leaguer of the North, but as he drew near he perceived that it was not so; for the singers used a tongue that he had not heard before, neither that of Dwarves nor of Orcs. Then Felagund, standing silent hi the night-shadow of the trees, looked down into the camp, and there he beheld a strange people.

More specifically, around the feet of the Blue Mountains, near the river Thalos; I've marked the approximate location on the following map, from Karen Wynn Fonstad's Atlas of Middle-earth: 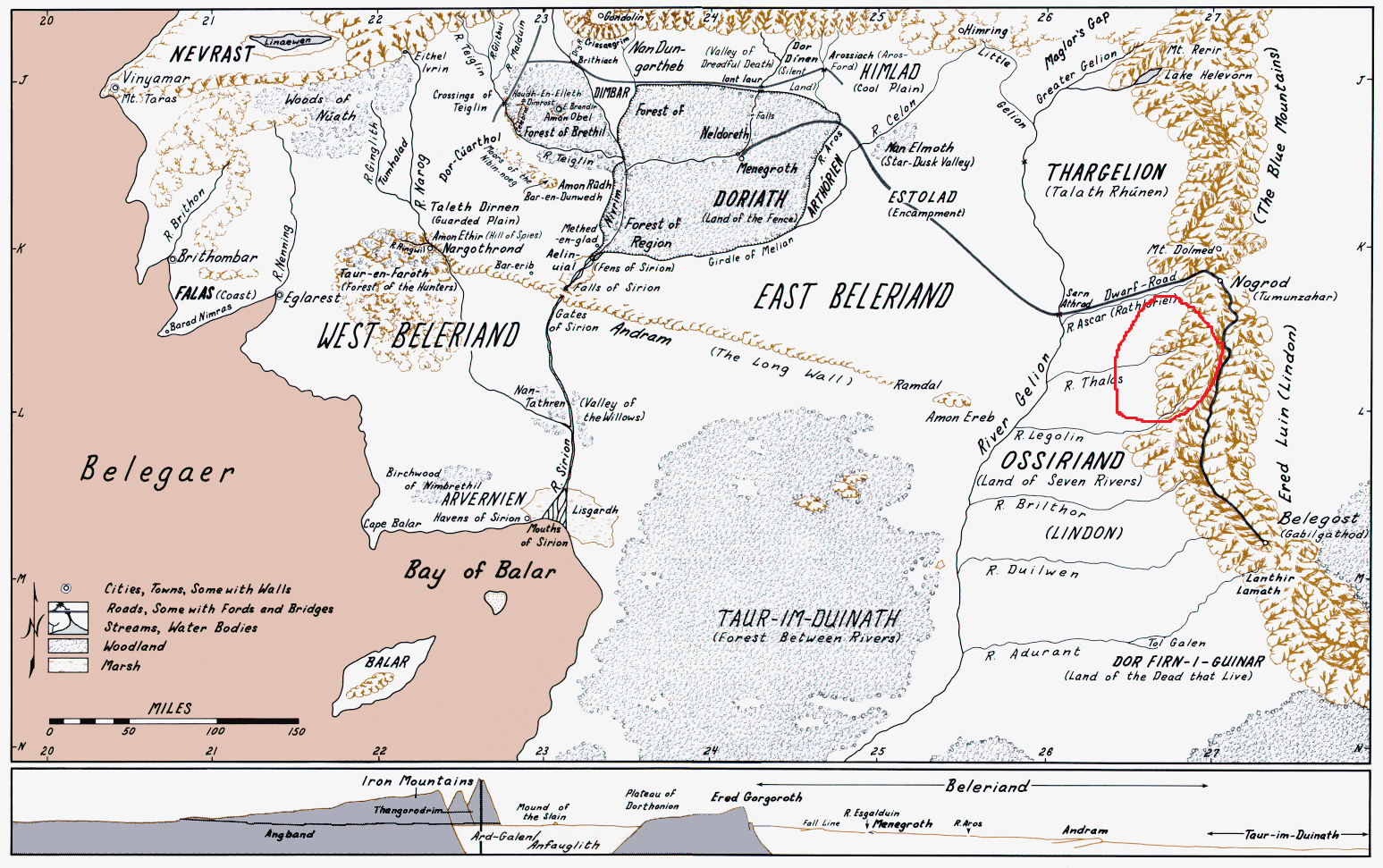 Not the answer you're looking for? Browse other questions tagged tolkiens-legendarium edain or ask your own question.

3
Was Lungorthin the first lord of the balrogs?
20
Did the Peoples of Middle Earth know of Beleriand in the Third Age?
2
What happened to the Moriquendi after the First Age?
9
Did Círdan ever leave Middle-earth?
8
In Tolkien's Middle Earth, did Gandalf meet with Thorin to encourage him to take back Erebor?
1
Was Beleriand Bigger than Second/Third Age Middle-earth?
8
Why did the people of Nargothrond heed the Sons of Feanor over Finrod Felagund?
13
When did Saruman discover Isildur's remains?