What was the highest rated episode of Star Trek?

In all of the televised episodes of Star Trek (TOS, TAS, TNG, DS9, VOY & ENT), what was the single highest Nielsen rated episode?

You can see the Nielsen ratings for ALL modern Star Trek episodes (TNG, DS9, VOY, and ENT) plotted together on this handy graph from here: 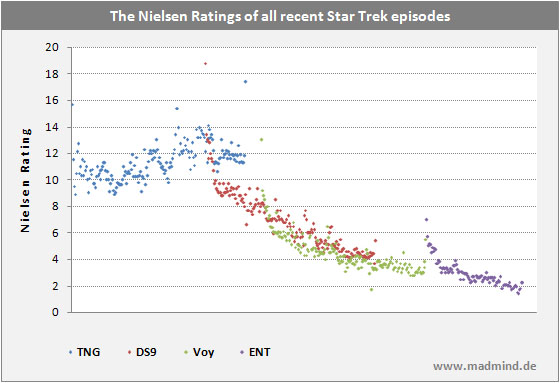 Which confirms Richard's answer (the highest outside of TOS is the DS9 premiere Emissary, followed by the TNG finale All Good Things), but I thought it was worth a separate answer for the complete graph displaying them all so nicely.

The series premiere for TOS (The Man Trap) opened with a Nielsen rating of 25.2 (albeit facing dramatically less competition than future shows). This is a figure that would never again be matched by any trek episode.

The series premiere DS9 (Emissary) garnered the largest overall Nielsen rating for a modern show with a score of 18.8.

The next most popular was the series finale of TNG (All Good Things) with a score of 17.4

The highest rated episode of Voyager was the series premiere (Caretaker) with a score of 13.3.

The highest rated episode of Enterprise (Broken Bow, Part 1) was a limp 9.1, declining to a positively flaccid 2.2 before finally being put out of everyone's misery.

The highest rated episode of Discovery thus far (The Vulcan Hello, Part 1) was a frankly appalling 1.9 but this doesn't take into account that the show had already been broadcast on CBS' own subscription-only service.

Not the answer you're looking for? Browse other questions tagged star-trek star-trek-tng star-trek-ds9 star-trek-voyager star-trek-enterprise or ask your own question.

51
Which actor has portrayed the most distinct roles in the Star Trek universe?
7
What produces the sound of transportation? (Out-of-Universe)
12
What did it cost to make an episode of Star Trek?
7
What technological concepts did Star Trek invent?
10
What Star Trek episodes take place in the Beta Quadrant?
22
Which (non-Earth) planet appears in the most Star Trek episodes?
12
What is the first non-Constitution class Starfleet ship we see in canon?
1
How many episodes were there where a transporter accident was an integral part of the plot?
3
Which Star Trek episodes deal with the Omega Particle?