What is the age gap between Anakin and Padme?

In Star Wars: Episode I, The Phantom Menace, when Anakin and Padme met for the first time, Anakin was a 5 year old child, I think. Does anyone know what was Padme's age at that time? After that, they fell in love and married. So what was the age difference between Anakin and Padme?

By the time of their (sexual) relationship in Attack of the Clones, (set ten years later, set in 22 BBY) he was 19 and she was 24 so the age-difference was just 5 years.

The name resonated in young Anakin’s heart and soul. He hadn’t seen her in a decade, not since he, along with Obi-Wan and Qui-Gon, had helped her in her struggle against the Trade Federation on Naboo. He had only been ten years old at that time, but from the moment he had first laid eyes on Padmé, young Anakin had known that she was the woman he would marry.

As to why she doesn't appear to age (much), I think we can put that down to an excellent moisturisation regime. 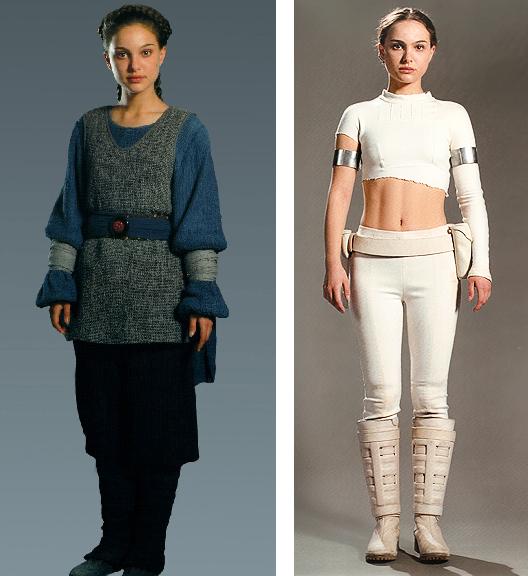 Not the answer you're looking for? Browse other questions tagged star-wars darth-vader the-phantom-menace anakin-skywalker or ask your own question.

21
What does an angel look like?
47
Why did Padme use her real name?
19
How could Padme (and Anakin) not know she was carrying twins?
9
Why don't Anakin and Padme look like refugees in Attack of the Clones?
18
Why did Qui-Gon and Anakin need to hide the fact that Anakin built the pod-racer?
1
When does Padme's & Anakin's relationship start?
3
What is the power source of Anakin Skywalker's podracer?
6
Does Padme know the name “Darth Vader”?
54
Did anybody find out it was Anakin who blew up the command center?