In both Superman and Man of Steel, Kal-El arrives on earth au natural.

The first version is possibly old enough to be potty-trained, but the second certainly isn't.

In the comics, do baby Kryptonians wear diapers? And if not, is it revealed how they "stay clean," so to speak?

Well, in many versions of Superman's origin story, he is wrapped in a blanket, thus obscuring whether he is wearing a diaper or not. This is from Secret Origins #1: 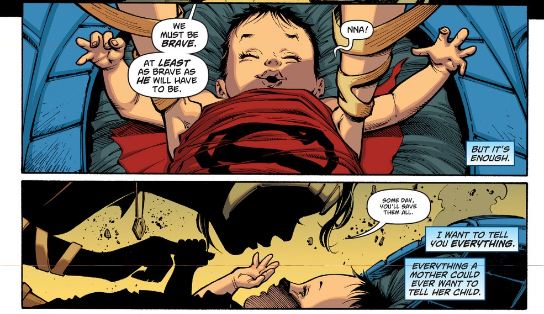 He could be naked, or he could having on a Kryptonian diaper. Of course, even if he is not wearing a diaper, Kryptonian babies might still normally wear diapers.

On the other hand, the cover of this comic shows Superbaby, strapped in a rocket and ready to go to Earth, wearing something that looks a lot like a red Kryptonian diaper.

(Yes, I am saying that Superman's costume is partly made of his childhood diaper).

So I'd say they probably do (at least according to one version of Superman's origin story).

A caretaker can try to be attentive to the baby's cues, so as to know when to take it to a toilet or something similar. Babies can apparently also be trained to defecate on command. Or they can be put in a open area where messes are easy to clean.

27
Is Superman really super compared to other Kryptonians?
7
Kryptonians as prehistoric gods & goddesses
1
How can the Kandorians(Kryptonians) have their powers?
3
Are Kryptonians affected by Kryptonite if Earth's sun turns red?
11
Wouldn't this sound kill or seriously maim everyone close to Superman?
8
Does Superman wear his marriage ring?
13
Can speedsters phase through Kryptonians?