I'm trying to find the book that is about a boy and a lizard-alien. The lizard-alien can only survive if it lives on the skin of its host as a tattoo and can only be away from its host for a set period of time before he fades. The lizard-alien is a guardian of some sort and lives by a code.

I forget what the book is about exactly. I only remember it is set in space.

This is Dragon and Thief, by Timothy Zahn 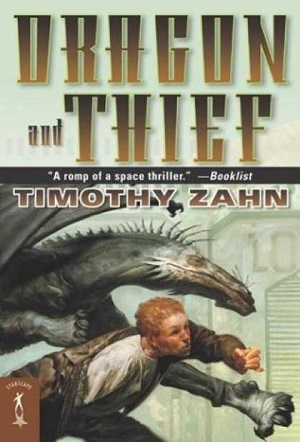 It could also be some other book in the Dragonback series.

This is a book about a boy who acquires a dragon-like alien that can become a tattoo.

As the rest of his body reached Polphir’s, each part altered from three-dimensional to two-dimensional form as it flowed onto his host’s body. A split second later the transformation was complete, leaving Draycos stretched like a living tattoo across Polphir’s back and legs and arms.

Indeed, the dragon will die if it is too long away from a host:

“After six hours had passed, I would die,” Draycos said softly “But I am a warrior of the K’da. I will not force myself upon you if you do not wish it.

Incidentally, this also demonstrates that Draycos lives by a code, as mentioned in the question.

Jack was his host, and there was a high debt of honor between a K’da warrior and his host.

Not the answer you're looking for? Browse other questions tagged story-identification books aliens space or ask your own question.

8
A story I read in about 1986: A boy meets an alien, his mind is wiped afterward
18
Space fantasy novel - Human king, alien prince, telepathic plant-human hybrids
6
80's alien movie: young boy finds and protects a glowing alien green rock which becomes his friend
7
Late '70s / early '80s Comic With Lizard and Woman in Wasteland?
8
Child's science fiction book about kids in space with a metal disk and an alien chasing them after it
25
Sci-Fi book about female pilot in the distant future who is a linguist and has to decipher an alien language/code