In which dimension did Rick and Morty end up in after they Cronenberg'd their home dimension?

There have been several instances where Rick has defined himself as being from Dimension C-137.

First in S02E02 ("Mortynight Run") when Rick identifies himself at the Jerry Day Care sign-in. And then later in that season at the Council of Ricks. 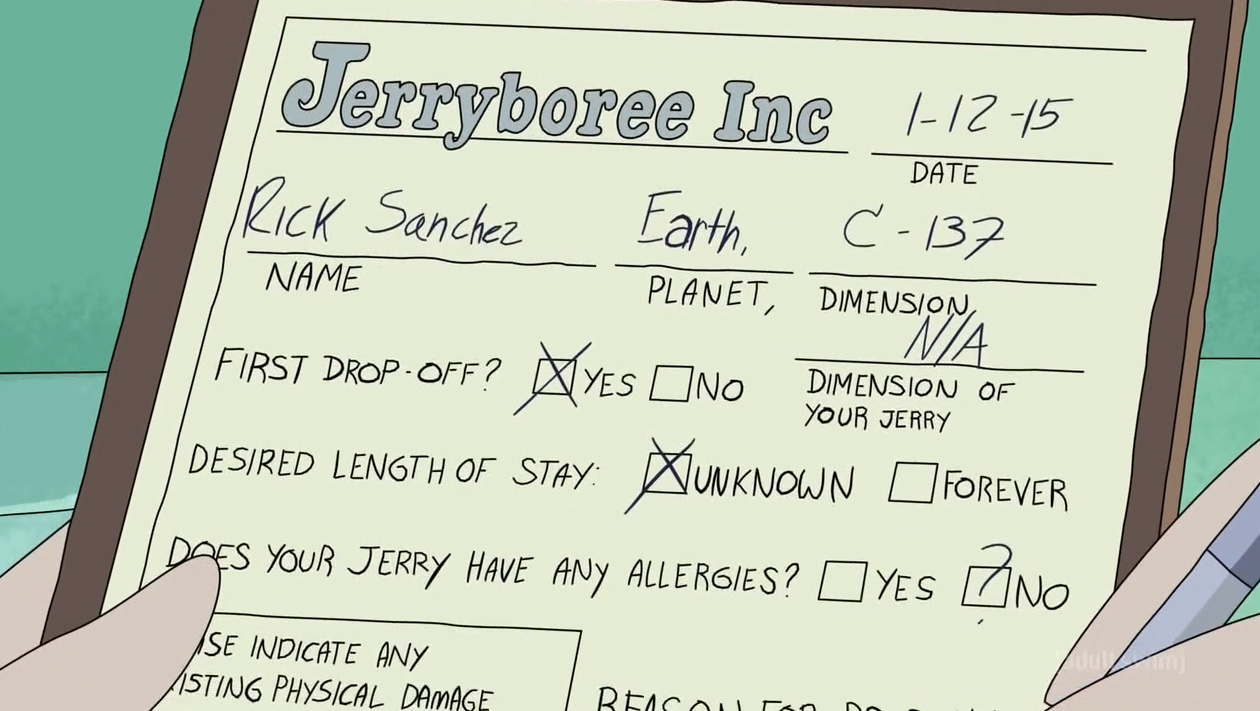 In S01E06 ("Rick Potion No. 9") Rick sloppily concocts a serum that turns the entire human population into Cronenberg monsters. They are forced to leave their home world to another dimension similar to that of theirs.

Question: Is it clear or are there any clues or easter eggs that tell us what dimension they moved to?

I don't believe their new dimension (C-XXX) is C-137, because in that same episode at the Jerry Daycare, we see that Rick fills Jerry's home dimension as N/A. I'm interpreting that as Rick knows his original dimension but doesn't know Jerry's.

This is going to be a confusing answer. So let me label the dimensions with a different name, which will help when you read the rest of the answer.

The question now becomes: which of these dimensions is C-137?

This seems the most likely, for a multitude of reasons:

But why does Rick fill in "N/A" for Jerry dimension? This doesn't make sense.

Actually, it does make sense. Asking for Jerry's dimension after already having asked for Rick's dimension (on the form) would only be meaningful to fill in if this Jerry is from another dimension as this Rick.

If Rick fills in "N/A", that means it's not applicable to make this distinction, which means that Rick is implicitly saying on the form that him and his Jerry are from the same dimension.

This also makes sense. Rick and Morty are hiding the fact that they are from OD, and they consistently act as if they are from ND. It makes sense for Rick to put his assumed identity (ND, C-137) on a Jerryboree form.
(I would hazard a guess that the Council of Ricks members also make use of the Jerryboree.)

There is little evidence that suggests OD must be C-137.

This is further compounded by the fact that we never hear the name "C-137" while our Rick and Morty are still in OD.

And then there's the fact that the Council of Ricks referred to our Rick as "Rick Sanchez of Earth Dimension C-137". If C-137 is actually OD, that would mean that the Council was aware that this Rick is the Rick from OD (and not from ND, where they came to get him).

The Council couldn't have known that our Rick is from OD.

Later, when they suspect our Rick of being guilty of the murders, the Council of Ricks wants to scan Rick's portal gun to ascertain where he has been:

Some Rick - Scan his portal gun!
Our Rick - Oh, come on. Don't look at another man's portal-gun history. We -- we all go to weird places.
Some Rick - Yes, but it appears you alone have been going to the exact timelines and locations in which the murders occurred.

This means that when the Council of Ricks entered the scene and addressed our Rick as "Rick Sanchez of Earth Dimension C-137", they must have been unaware that Rick has travelled (as they have not yet scanned his portal gun), which further suggests that they are therefore referring to Rick by the current dimension's name.

It's never explicitly confirmed, but it's highly likely that C-137 is the new dimension that Rick and Morty jump to after Cronenberging their home dimension.

Rick and Morty moved to the "Replacement Dimension" as it is called in most of the literature on the subject.

The Replacement Dimension is a parallel timeline so similar to C-137, Rick couldn't be bothered to give it a name. He chose it because that dimension's Rick and Morty had just killed themselves in an experiment. How convenient.

No further notation has currently surfaced on a mapping designation for the Replacement Dimension at this time.

The Real Question on everyone's mind should be: How did Rick C-137's portal gun/computer know where to find a conveniently dead or soon-to-be-dying Rick and Morty for Rick C-137 to slide into...?

The new dimension is definitely NOT C-137. It may be that we have never seen his C-137. One instance is that in our plot, Rick abandoned Beth for 20 years, but during the episode with the evil Rick, we see that in our Rick's memory appears a young Morty. Our Rick is holding and playing with morty. Furthermore, in S03E01 after

Rick escaped prison and tries to kill the council or Ricks, he says "she is not even my Summer" referring to the Summer of the dimension Rick transported after he Cronenberg'd the world.

So far there are no signs of what dimension he is, but I think that's the whole point. It does not matter for Rick where he goes. He probably lost his dimension long time ago, and now he is just hopping on other dimensions trying to survive.