Why did Anakin turn to the Dark Side?

In the movies The Phantom Menace, Attack of the Clones, Revenge of the Sith, Anakin turns bad and becomes Darth Vader. What is the reason he turned into a Sith, and didn't the Jedi council know about his bad side? Is it that Yoda was unable to predict that Anakin would turn to the Dark Side?

Because Sidious manipulated him

From Revenge of the Sith:

ANAKIN: What have I done?

PALPATINE: You are fulfilling your destiny, Anakin. Become my apprentice. Learn to use the dark side of the Force.

ANAKIN: I will do whatever you ask.

ANAKIN: Just help me save Padme's life. I can't live without her. I won't let her die. I want the power to stop death.

PALPATINE: To cheat death is a power only one has achieved, but if we work together, I know we can discover the secret.

Darth Sidious deceived Anakin into believing that with his help, he could save Padme. In reality, of course, Sidious merely pushing Anakin closer to killing her.

Because he thought the Jedi did not trust him

PALPATINE: It is upsetting to me to see that the Council doesn't seem to fully appreciate your talents. Don't you wonder why they won't make you a Jedi Master?

ANAKIN: I wish I knew. More and more I get the feeling that I am being excluded from the Council. I know there are things about the Force that they are not telling me.

PALPATINE: They don't trust you, Anakin. They see your future. They know your power will be too strong to control. Anakin, you must break through the fog of lies the Jedi have created around you. Let me help you to know the subtleties of the Force.

The Jedi were cautious about giving such a young individual so much power. Anakin, though, believed he should advance to the rank of Master, and perceived their caution as excluding him from his rightful position.

MACE: You are on this Council, but we do not grant you the rank of Master.

ANAKIN: What? ! How can you do this?? This is outrageous, it's unfair . . . I'm more powerful than any of you. How can you be on the Council and not be a Master?

Notice Anakin's arrogance. Anakin believes that, by virtue of his sheer power in the Force, he should be appointed to a position of authority, a position which in reality requires wisdom and temperance as well as midichlorians. Of course, Palpatine also is playing him here; Palpatine's suggestion that Anakin serve as his representative on the Jedi Council was intended to put Anakin in a position where he would feel that the Council was denying him a seat at the table.

Even when Anakin placed his trust in the Jedi Order, by exposing Palpatine as a Sith Lord, they didn't fully trust him. Certainly they had good reason not to, but this merely confirmed in his mind what Palpatine had told him: that the Jedi could not be trusted, that they were afraid of Anakin's power:

ANAKIN: He won't give up his power. I've just learned a terrible truth. I think Chancellor Palpatine is a Sith Lord.

ANAKIN: Yes. The one we have been looking for.

MACE WINDU: How do you know this?

ANAKIN: He knows the ways of the Force. He has been trained to use the dark side.

MACE WINDU: Are you sure?

MACE WINDU: Then our worst fears have been realized. We must move quickly if the Jedi Order is to survive.

ANAKIN: Master, the Chancellor is very powerful. You will need my help if you are going to arrest him.

MACE WINDU: For your own good, stay out of this affair. I sense a great deal of confusion in you, young Skywalker. There is much fear that clouds your judgment.

Because the Jedi Order drove away his friend

In the Clone Wars TV series, the Jedi Order expels

Anakin's apprentice Ahsoka Tano, after she was framed for the bombing of the Jedi Temple.

she was nearly sentenced to death.

This may have caused Anakin to develop a person grudge against the Order, since he had been very close to his friend, and they had fought side-by-side in Clone Wars.

Because of his personality

Anakin was prideful, emotionally unstable, angry, and violent, especially for a Jedi.

He was willing to kill Count Dooku when the latter was at his mercy.

PALPATINE: Good, Anakin, good. I knew you could do it. Kill him. Kill him now!

ANAKIN cuts off COUNT DOOKU's head. A huge EXPLOSION somewhere deep in the ship rattles everything.

He slaughtered the Tusken Raiders in anger after they killed his mother.

EXT. TATOOINE, TUSKEN RAIDER CAMP, OASIS - DAWN The pale light grows. Thin tendrils of smoke rise slowly in the cold, clear air. Somewhere an dog BARKS. An OLD WOMAN comes out of one of the huts. She carries a pail. She swirls it and tosses the dirty water onto the ground.

As she goes back inside the hut, a TUSKEN CHILD runs past, dragging a stick in the sand. The CHILD runs through the line of huts, turns a corner, and stops suddenly, staring at the bodies of the TWO TUSKEN GUARDS. Between them, ANAKIN stands outside the hut door. His face is a grim mask. The CHILD stares, then there is a FLASH OF LIGHT as Anakin’s lightsaber switches on.

Anakin's pride and anger are illustrated well in this scene from Star Wars: Obi-Wan and Anakin. Two other Jedi have told Anakin that his emotions are too strong for him to be a proper Jedi, and also mock him by calling him a slave (a reference to his childhood): 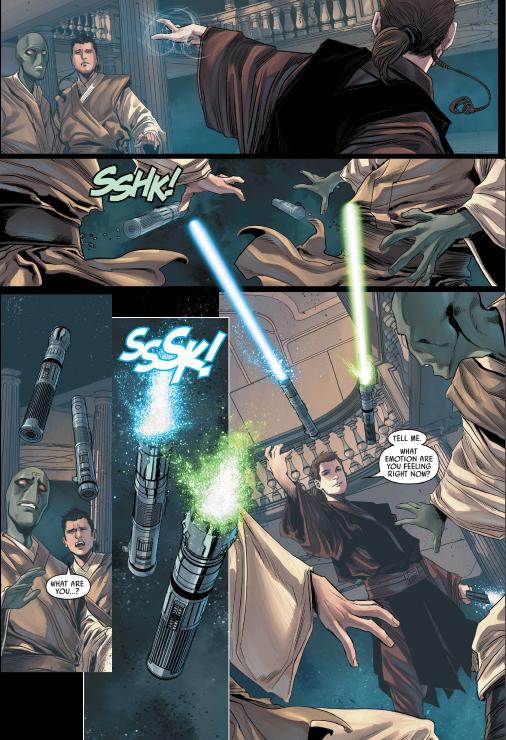 He points the lightsabers at them and says, "Tell me, what emotion are you feeling now?"

While they certainly had provided ample provocation, this is another example of Anakin's pride and proclivity for violence. He responds to childish bullying with a lethal threat.

Incidentally, this is also an example of someone turning on a lightsaber with the Force.

Palpatine was a master manipulator, of people, governments, and the Force; indeed, the plot of Eposides I-III are essentially Palpatine manipulating everyone and everything - both sides of every war - to rise to power, all while hiding in plain sight in front of the entire Jedi Council.

In Episode I, Palpatine manipulated Queen Amidala into voting the current Supreme Chancellor out, using the Trade Federation to invade Naboo, then helping the Queen reach the Senate; through his actions, he becomes the Supreme Chancellor.

By Episode II, he has already manipulated the system to stay in power much longer than he should. He uses his Darth Sidious personna to manipulate Count Dooku, and through him manipulates the Separatists into a war. Due to their threat, he is granted emergency powers, which allow him to use the clone army that the Jedi discovered.

In Episode III, Palpatine sets up his own kidnapping, and uses Anakin to kill Dooku, perhaps as proof to himself that Anakin will do as he suspects - defending the weak by killing the strong, just as Anakin killed the sand people who kidnapped his mother.

Now, this entire time, Palpatine has been manipulating Anakin. While the movies don't say that Palpatine has been manipulating Anakin through the Force, it's entirely possible; regardless, we do know Palpatine has been manipulating him through charm and deceit. Palpatine acts as a caring father figure, something that Anakin never really had; he plants distrust between Anakin and the Jedi Council, while showering Anakin with praise. He knows Anakin well; Anakin is prone to making poor, emotional decisions in the face of immediate conflict. When he manipulated Anakin into killing Dooku, for instance, Anakin proved he would do just about anything Palpatine asked of him. With all the pieces in place, he tells Anakin his plans, knowing Anakin will go to the Jedi Council, allowing him to set up a direct conflict between himself and the Jedi. He knew that Anakin would choose to protect his friend (Palpatine), rather than siding with someone he distrusted (any Jedi from the Council). When Anakin saw Mace Windu being (as he thought) unnecessarily harsh, and Palpatine injured and begging for help, his idealism blinded him; he reacted as he always did, attacking Mace Windu.

At that point, Anakin found himself past the point of no return. He knows the Jedi (who already distrust him, though not as much as he may think) won't accept him back; as he sees it, the only other option is Palpatine. In his mind, he is irredeemable; regardless of his true nature, he thinks he has already turned fully to the dark side. Killing the Jedi, even the children, is no worse than anything else he could do. His only goal at that point is saving Padme; when she dies, there is truly nothing left to live for but his promise to Palpatine, until he meets his son decades later.

Not the answer you're looking for? Browse other questions tagged star-wars darth-vader revenge-of-the-sith anakin-skywalker or ask your own question.

40
Why Did Anakin Skywalker Believe that Turning to the Dark Side of the Force Would Save Padmé?
27
Why doesn't someone try to turn ON/OFF enemy's lightsaber using the Force?

15
When Can the Dark Side Be Sensed?
117
Is the Dark Side of the Force more powerful?
11
Why didn't Jedi Council perform a Midi-chlorians test in the Senate?
28
Did the 501st Legion know what Anakin had become when they attacked the Jedi Temple with him?
57
Why did Palpatine pick 'Vader' as a name for Anakin?
8
Was Darth Vader technically the last Sith Master?
7
Does Padme know the name "Darth Vader"?