Why did Superman hold back against The Flash in Justice League?

In the New 52 issue of Justice League, issue 2, Superman, Green Lantern, Batman and Flash all meet for the first time. Due to poor writing, they all start fighting Superman.

Flash is shown to be much faster than Superman, able to dodge his punches with ease. What is important here is that Superman is trying to punch Flash. He wants to hurt him.

All of a sudden, he has a chance to hurt him but simply flicks him.

Why did Superman suddenly decide to hold back?

Superman is highly aware that most of his opponents are often less durable and usually less physically powerful than he is. When in doubt he uses the least amount of force required to handle his opponents. To understand his actions, they have to be seen in context.

The fight opens with Superman using his super-senses to detect that Batman's utility belt is empty. This means he is always scanning his opponents. Something prudent when you aren't sure of the capabilities of your opponents. He does this to everyone he fights. 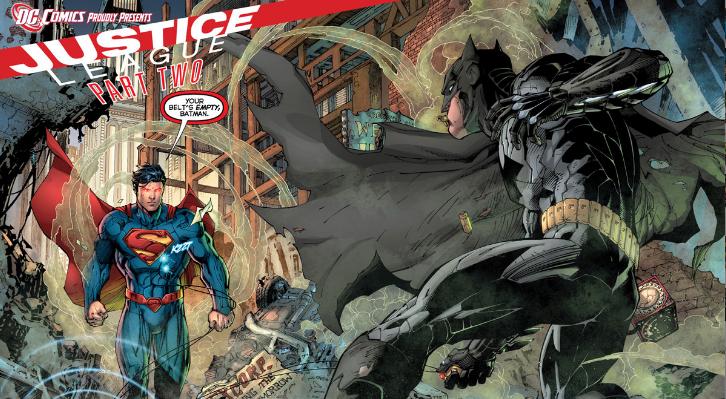 While the Flash's initial interactions befuddle Superman (he likely has fought few opponents as fast as he is) once he realizes he can match his opponent's speed, he restrains himself, pulling his punch when he having taken the Flash's measure sees he need not use more than the tiniest application of force. Your description might have seemed to adequately describe the scene but in context it appears more as Superman getting the measure of his opponent. 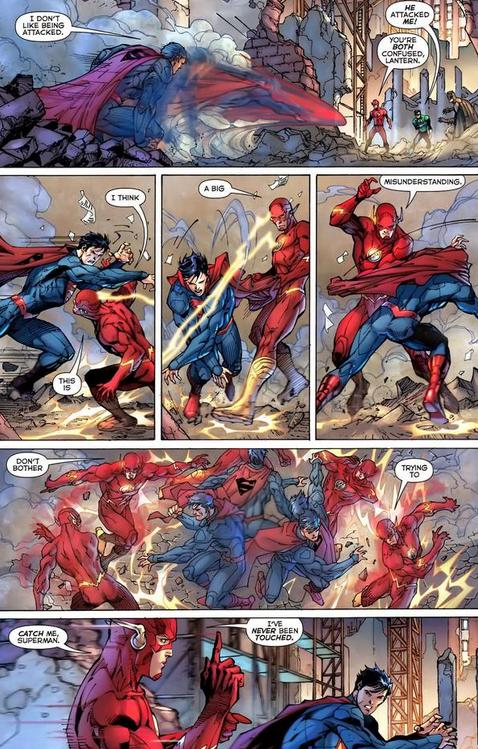 Superman always engages in restraint during combat. Always. With strength as great as his, it is important for him to exercise control because he is morally opposed to killing his opponents. In this fight he applies the force necessary to damage his opponent, nothing more. Check out his eyes, he is predicting where the Flash will be and times his blow to make sure he is where he needed to be. Once he was sure he could hit him, he instead just flicks him. That tiny blow knocks the Flash back down the street. 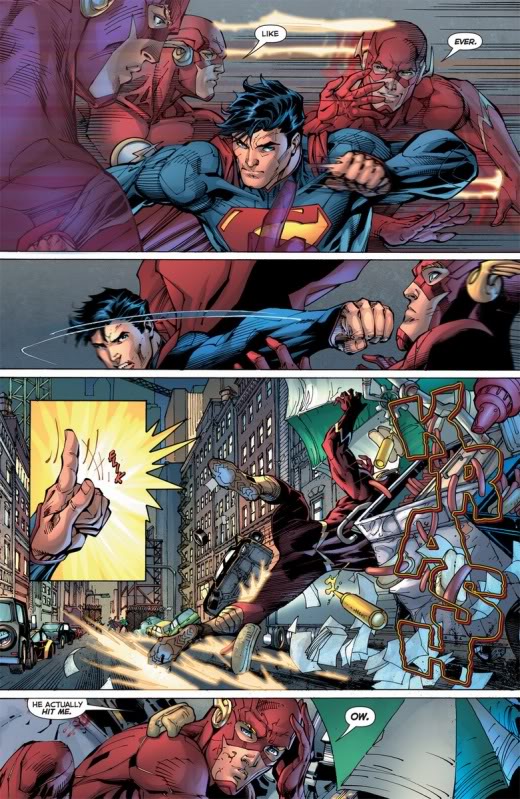 Though they have not shown it in the DCnU, in the previous continuities, Superman was in the habit of scanning his opponents to determine how much force to use in combat. He uses his superhearing to detect heart rates, his x-ray vision to determine physical bone density. He also takes note of their ability to deal damage to him since if they are strong enough to hit him and hurt him they should be strong enough for him to use more of his capability in a fight. Even if he believes his opponent is strong enough to handle the full out use of his powers, he will still restrain himself in order to reduce collateral damage to the environment and the people who may still be nearby.

A quick survey of the Flash's physiology revealed, despite his amazing speed and ability to deliver super-fast punches, the Flash was in no way capable of surviving a full-on direct punch. A flick of the finger is more than adequate for knocking out someone whose overall physical capabilities is only a little more than a highly trained human being.

Superman has always been noted (in the primary universe, at least) for his respect for life. Superman, as a general rule, doesn't kill. He always holds back, until he knows that his opponent can take a harder hit.

Recall that P = M * V (momentum = mass times velocity). Against someone faster than Superman, 'Velocity' is going to be a BIG number. Superman, to minimize the force he used, had to strike ... with a minimum amount of force (in this case, by using a smaller surface area).

Looks like Flash is toying with him and keeping the minimum distance outside of Superman's reach. He is likely just trying to show Supes how hopeless it is to try to fight him as he stated. Superman then flicks him in order to extend his reach and it catches Flash off guard. Perhaps the flick wasn't from him holding back, but out of necessity to land the blow.

What is important here is that Superman is trying to punch Flash.

Looks to me like in the panels before the fist-flick, Superman's hands are open - as if he's trying to grab Flash. The fist may have been a ruse to get Flash to duck right where Superman wanted him to, for the flick.

Looks like he was scanning at first since he was trying to dodge. Toying with him, lettin him think he got the upper hand, so he trys to fake hit him knowing he will move. Then he senses him and bluffs a punch and flicks him. Just to knock him down but send a messege to not mess with him. It was all to send a messege

When did it show here that he matched the Flash's speed at all? I see the Flash running circles around Superman while Superman is trying to keep up. He mainly anticipated where the Flash was going to be. There's a huge difference from anticipatory attack and a reactionary attack.

You could tell by his facial expressions that he was clearly distracting him, toying with him since he thinks no one is even near his level(which I'll give to Superman). He's around Barry's level, but when Barry get's serious? He's gone past light-speed already and he was on the defence against Superman. Plus there were plenty of opportunities where he could've gone on the offensive and hit Superman with a couple of super-speed punches or vibrated through his attacks (which Superman can't do). To me it seems like if his ego and the fact he just had to distract him from Green Lantern and Batman hadn't gotten in the way, who knows how long this fight could've gone on for.

In the second panel, first box, the first after-image of Barry is looking at Superman's hand noticing their in a fist and obviously takes into account that Superman is now trying to actually hit him and is reluctant to be hit by someone like Superman and he dodges his punch but doesn't take into account that full reach of his hand. I'm pretty sure Superman he didn't hold back much after noticing the difference in their combat speed, how Barry is able to run circles around him while keeping a smile on his face also since this is a different Superman entirely, who's now arrogant and sure of himself, sort of a smugness to him (at least in the JL comics he is) and actually gets easily irritated with the Flash after the first hit to the back (Which post-crisis Supes would've definitely not gone on the offensive and immediately attacked), then the cape swoop over his head, then him being a couple steps behind every move the flash makes so he noticed Barry's arrogance and capitalized on the fact that Barry wouldn't expect him to simply flick him. Both of them had a reality check in this little fight.

Now I see why there are lots of pple who underestimate Superman. Flash says he had never been hit but acknowledged the fact that superman hit him with the 'wow' expression. That is to show you that he was surprised that he was hit. If he was that fast could he not have moved back before the flick? A flick is part of movement and he should have had faster reflexes. Are u saying no one he ever tangled with tried to anticipate his movement? Superman never tried to hit him and @Thaddeus was right in his analysis, he moved a fist forward making the Flash spin around him and he simply met the flash as he was coming round and flicked him to show him up. It will be unfair to make Superman faster than the Flash since that is all he has. Superman is like the best decathlete who might not be the best in all the parts but maybe second best in most. I think a version of Superman has also gone faster than the speed of light (not sure) however a version of Superman is almost Omnipresent. That is way cooler than being fast. Before the Flash gets there he is already there.

Superman has vibrated through attacks before in the comics on several occasions, he has moved FTL (faster than Light) by magnitudes, and Superman is noted as thinking at zepto second speeds even by Batman. In the new continuity Superman is being attacked by Green Lantern and Batman the Flash jumps in and Superman did not start any of it (read the comic book). This was basically the other heroes realizing why Superman is called "Superman." Superman always holds back and gets the measure of his opponents and never tries to hit very hard (Superman can destroy planets so holding back matters a lot to him).

This question is a challenge to answer when the bias is on Superman. I also think that this is the answer, being that it is utterly impossible for Superman to think as quickly as the Flash, let alone hurt him with a finger flick. The force it takes for the Flash to reach the speeds he does, I have yet to see accomplished by Superman. And to reach speeds done by the Flash, large amounts of pressure and force are actively worked against, when the Flash runs into them. So he holds back because the writer thinks the Flash is a joke.

I don't know how some of you think Superman is far outclassed when it was obvious that since he's the stronger guy, he assesses his opponent until he figures them out. He figured out Flash and that little flick is all you need to know that he held back tremendously. Superman's limits are still unknown so let's not get carried away with saying Flash greatly outclasses Superman in speed just yet. Flash may end up being faster but I wouldn't think by much.

MinarutoMinaruto
11
Add a comment  |
Highly active question. Earn 10 reputation (not counting the association bonus) in order to answer this question. The reputation requirement helps protect this question from spam and non-answer activity.

Not the answer you're looking for? Browse other questions tagged comics dc superman the-flash or ask your own question.

40
Is Superman always holding back?
42
How do we know the Flash is faster than Superman?

211
Whose underwear is this?
9
Can The Flash breathe in outer space?
3
Is there any plan to expand Arrow/Flash-Verse to include the rest of the Justice League?
12
What were the votes for Hawkgirl to remain in the Justice League?
23
What are the Justice League members’ weaknesses?
8
Does Lex Luthor know Batman's identity?
5
Is Superman more powerful than the Greek gods?
2
Is the Batman who Laughs storyline in "Dark Nights Metal" part of its own story?
7
Why is Batman acting so out-of-character with Jarro?
6
Spinoff / Alternate Universe of DC Comics involving mother earth rising up?