How does Asajj Ventress's lightsaber go together?

We see that Asajj Ventress's lightsabers can come together to make a double-sided lightsaber, but her lightsaber hilts are curved. How would they come together in a way that would make it easy to use?

star-wars lightsaber
share|improve this question
edited May 2 '16 at 18:46

She apparently could also attach them with a fiber cord to create a more flexible weapon.

As for ease of use, Wookiepedia notes "Though she would normally use the locking mechanisim, when connected by the fiber cord, the weapon was more difficult to control than a regular double-bladed saber, however, the curved hilts and the fiber cord joint of her saber gave the wielder the benefit of striking from unexpected angles." They provide citations to comics which likely show her wielding the saberstaff. Presumably, the relative clumsiness of such a grip is compensated for in part by practice and in part by the advantage provided by her opponents being unsure as to how to handle it.

So far, the images I've found almost always show her holding the staff one-handed. In some cases, she's gripping the middle with her wrist turned and in others, she's gripping closer to the blade on one side for a more standard grip. 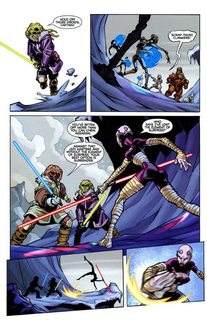 When gripping it with both hands, she just has one arm straighter than the other: