I remember reading this novel in high school (around 2010-2014). Chosen kids are transported through time into a post-apocalypse world where humans cannot have babies anymore. Each kid represents a god or a goddess from the Egyptian, Nordic, Roman/Greek, Aztec/Mayan, Hindu mythologies and will compete against each other to rule over human kind.

Deities represented: - Athena & Aphrodite (the girl was able to charm speak; however, she was scared of having an ability to control other's will with it). - Shiva (she was scared of having powers to easily destroy) was chosen to represent Hinduism. - Thor (he only spoke his language;therefore, could not communicate with the rest & was the only adult participant) for Nordic faith. - Horus (a clever and arrogant boy who was able to fly/float) for Egyptian. - I don't remember the name for the Aztec/Mayan god , but I remember that the other gods/goddesses were not expecting him to be in the completion.

Every god chosen to represent their realm will be forever lost if the reincarnation kid loses in the game.

I remember their was an oracle, because she was the only one born in this time.

I cannot remember the title nor the author. I remember it's a blue book with a blue bird on the cover.

This is likely the The Avatars trilogy by Tui T. Sutherland, specifically the first book, So This Is How It Ends. 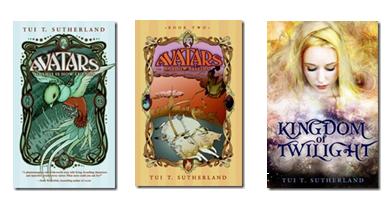 So This Is How It Ends is the first book in the Avatars Trilogy. It was released on October 10, 2006. Kali, Tigre, Gus, Diana, and Amon are five seemingly normal teenagers. On December 21, 2012, they are transferred to the future, where they hear voices in their heads telling them to go in a certain direction. They encounter many problems on their way to the "Gathering place" where they learn that they are avatars from different gods and that they must fight each other to find out who will become the ruler of all gods and humans.

Not the answer you're looking for? Browse other questions tagged story-identification novel mythology reincarnation or ask your own question.

4
Book Series, England, Goddesses, Reincarnation
4
How does reincarnation work in the Wheel of Time series?
6
Trying to find a book about reincarnation I read in the early 90s
4
About reincarnation "forever and a day" blue cover
5
Fantasy book series, a young boy finds a book which contains a passage in it that when read gives him like magical powers
11
Young adult trilogy about antarctic laboratory and old Gods
5
70's/80's anime where the heroes travel on a spaceship to rescue a princess
11
Novel about a girl using a tomb to travel to medieval times
19
Novel about organic and inorganic magic on flying islands